‘New Amsterdam’ Sneak Peek: Max Reaches Out for Help — But Not From Helen (VIDEO)

Max (Ryan Eggold) is dealing with being a single father on New Amsterdam, and that means he needs help occasionally.

One such instance arises in Tuesday’s episode, “14 Years, 2 Months, 8 Days,” and TV Insider has an exclusive sneak peek. 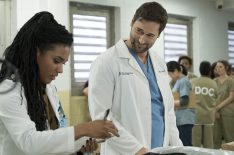 As we’ve seen time and time again, Max isn’t exactly one to reach out when he should, but he has no choice when he brings Luna to daycare and gets some bad news. The daycare is closed the following day — due to a breastfeeding class for new mothers, which he came up with — and since Max fills the role of babysitter and friend, he’s in a bit of a bind.

Perhaps that’s where his new friend, Alice (Alison Luff), whom he met when he brought Luna in for her checkup, comes in? Watch the clip above. “Everyone’s romantic life gets flipped on its head,” executive producer David Schulner previously teased of the second half of Season 2. “There’s going to be some new romance at New Amsterdam, and some old romances are going to go away [involving characters we know] in a big way. Some surprising and some inevitable.” And while he did say that Max is involved in some way, he wouldn’t say with whom.

Also in this episode, Sharpe (Freema Agyeman) has an important realization that will affect her career, and Max and Reynolds (Jocko Sims) are in uncharted waters when a young patient comes in with the symptoms of a heart attack. Is 'New Amsterdam' About to Say Goodbye to One of Its Doctors?

One of the doctors was stabbed in the winter premiere, leading to a major decision.