[Warning: The below contains MAJOR spoilers for Season 16, Episode 10 of Grey’s Anatomy, “Help Me Through the Night.”] Ahead of the big 'Grey's'-'Station 19' crossover, Borelli previews what's in store for Levi and #Schmico.

Simms and Helm are the worst injured: Simms has fractured facial bones, and Helm has pelvic pain. Parker, meanwhile, has a palpable scalp hematoma and needs a brain scan. Brody is just banged up, so Bailey (Chandra Wilson) enlists her help. Schmitt (Jake Borelli) is unscathed but suffers a panic attack in a supply closet. Bailey gets him back on his feet and puts him to work, too.

Even so, the hospital is short-staffed, so Meredith (Ellen Pompeo) calls in reinforcements: Richard (James Pickens Jr.) and Owen (Kevin McKidd). Bailey begrudgingly gives the two Pac North docs temporary privileges at Grey Sloan. Ben (Jason George) pulls Richard aside and asks him to keep an eye out for Bailey, especially since she just suffered a miscarriage. Simms needs his fractured facial bones bolted back into place, and Owen and Jackson (Jesse Williams) scrub in, with Brody assisting. As they operate, Brody makes an unwitting comment about the chemistry between Teddy (Kim Raver) and Koracick (Greg Germann), not realizing that Teddy is with Owen now. Owen confides to Jackson that he wants to propose to Teddy but doesn’t know how to do a proposal big enough to make up for all their lost time. Jackson tells him to pop the question sooner rather than later: “If she’s somebody you feel like you want to be with forever, that should include now.”

They operate on Simms successfully — and gruesomely, for us viewers — but just as they’re about to close, Owen notices that Simms’ brain is leaking fluid. They patch the leak, and Koracick later thanks Owen for saving his mentee’s life. In another O.R., Meredith prepares to operate on Helm, who is still drunk from Jackson giving her whiskey at the bar to numb her pain. She tells Mer that she’s still mad at Schmitt, who’s also scrubbing in, but her rant turns into a declaration of love. “He got the love of my life fired,” she tells Mer. “Which is you. Surprise! I love you, Meredith Grey. And I know it’s stupid and I should get over it, and I will if I ever meet anyone else. I’m starting to think I never will. I’m embarrassed now, so I’m going to go prep myself.” Meredith laughs and thanks Helm, but just then, Schmitt passes out.

Don’t worry about him, though: It’s “broken heart syndrome.” In other words, his stress gave Schmitt all the symptoms of a heart attack without an actual heart attack. He wakes up with Nico (Alex Landi) by his bedside, and the two boyfriends cuddle. Even better, Mer tells Schmitt that she forgives him for ratting her out. 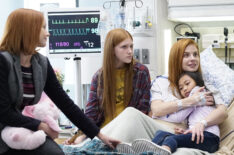 No, you should be more worried about Helm, who goes hypertensive and tachycardic on the surgical table. Richard and Bailey do an exploratory laparotomy and discover a bleed, but Richard needs her chest cracked to find the source of the bleeding. Bailey hesitates with her scalpel poised, so Richard takes over. He finds the bleed and saves Helm’s life. Schmitt later visits her to apologize, but she doesn’t need him to. “You’re my best friend at this place,” she tells him. “If I don’t have you, I’m done for.”

As for Parker, Amelia (Caterina Scorsone) and Teddy take him for his brain scans. As they wait for the results, Teddy asks Amelia if she thinks if Owen feels trapped by a feeling of obligation to her, and Amelia replies that if Owen was feeling trapped, he would have proposed long since. Teddy appreciates the reality check. “You are incredibly kind, Amelia Shepherd,” she says. Amelia, however, looks guilty — probably because she hasn’t told anyone that her incoming baby is probably Owen’s, not Link’s (Chris Carmack). Parker spouts nonsense as he gets his scans, saying there was a bomb and asking if they’re in the green zone. Turns out, he has a temporal lobe contusion that’s exacerbating his PTSD from his military service. As Amelia and Teddy talk, he vanishes from the scan room. Amelia and Teddy scan security camera footage and find him in the hyperbaric chamber, which he believes is a bomb shelter. They get Parker out of the chamber, and it seems like he too is en route to a full recovery.

After the drama has passed, Owen finds Teddy, pulls her into an on-call room, gets down on bended knee, and brandishes a ring his mom gave to him when Allison was born. “Theodore Grace Altman, will you–” he says, but Teddy interrupts, worried about him repeating a pattern. “I’m not repeating a pattern,” he insists. “I’m starting a new one: loving you, loving our family with my whole heart. That’s my new pattern.” She happily accepts his proposal.

Elsewhere in the hospital, Amelia tells Link there’s something she needs to say, and we get the sense she’s about to tell him the paternity news. They’re interrupted, however, by Owen and Teddy, who share their happy news. Koracick overhears and looks dismayed. After Owen and Teddy bound off, Link asks Amelia what the news is. Amelia says that she found out she’s expecting a boy. Link is overjoyed and asks if they can name him Scout, to go along with his first name, Atticus (from To Kill a Mockingbird).

Speaking of Koracick, he didn’t want DeLuca (Giacomo Gianniotti) to see his fellow residents in distress, so he sent him to the CCU to watch over Elliott Calhoun, the aortic valve replacement patient from last episode, since the guy’s heart hasn’t yet restarted. Under DeLuca’s watch, though, Elliott’s heart starts pumping by itself. “He didn’t die,” an astonished DeLuca tells Elliott’s wife. “He just had a really terrifying nap.” As for Jo (Camilla Luddington), she’s still hoarding the Safe Haven baby, and Link urges her to take the little one to the hospital before she’s arrested for kidnapping. She can’t even claim that he was taking the baby to get checked out by Alex (Justin Chambers), after all, since he’s still in Iowa with his mom (where apparently he’ll stay).

Jo relents and takes the baby to Grey Sloan, where she meets Alex’s replacement, Dr. Cormac Hayes (Richard Flood). They chat about the Safe Haven program, and Hayes asks if the hospital has a “baby hatch,” which is “like a mailbox for babies.” It sounds terrifying, but Hayes says it’s an incubator with a direct connection to the ER. He also reveals to Jo that he has two teenage boys. Anyway, Jo ends up handing the baby over to a social worker, and Link invites her to hang with his and Amelia’s kid anytime.. as long as she doesn’t have kidnapping on her mind. Richard tells Bailey that all the residents are going to be fine, and she realizes that she oversaw or delegated the treatment of each one. She starts crying, saying she couldn’t save her unborn child. “I am not fine,” she tells Richard between sobs. “She isn’t fine. And I can’t even hold her in my hands or put her in someone else’s hands and have them put her back together again. She just was, and now she isn’t. And I can’t do anything but just stand here, stand here and lose her.” Richard later brings Mer to Bailey’s office, and Mer commiserates with Bailey over donuts. “I had a miscarriage once,” Mer explains. “I never felt so lonely.”

Meanwhile, DeLuca visits Maggie (Kelly McCreary) at Chez Grey to tell her the news about Elliott.. and to tell her that he’s worried that he pushed Meredith away by giving her space. Maggie has bigger fish to fry, though, and not just because she quit her job last episode. As she talks to DeLuca, she gets served: She’s being sued for the wrongful death of her cousin, Sabine Webber. Seems like we’re going from the operating room to the courtroom again, people. See you next week!

Help Me Through the Night