Where Is National Dog Show Winner Nathan the Bloodhound Now?

Five years ago, the jowly crowd-pleaser won Best in Show at the Philadelphia event after delivering kisses to both handler Heather Buehner and the judge in the ring. Now gray-faced and 9, Nathan is taking it easy in Charlotte, North Carolina. 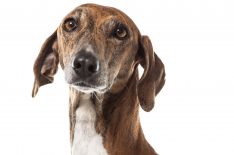 Including newbie the Azawakh, there are a total of 193 breeds in this year's show, presented by Purina and airing Thanksgiving Day on NBC. In fact, Buehner has shown several of Nathan’s offspring on the same lead he used: “I’m like, ‘I’ve got the daddy leash on you, so you better win.'”