« EPISODE 6
Whistlin' Past the Graveyard
EPISODE 8 »
My Shot

It’s a sister act on the November 7 episode of Grey’s Anatomy—Season 16, Episode 7, a.k.a. “Papa Don’t Preach.” Maggie (Kelly McCreary) spots someone who looks just like her at Grey Sloan Memorial, and the woman turns out to be her cousin, Richard’s niece Sabi—played by Crystal McCreary, a.k.a. Kelly’s sister.

Sabi and her father, Richard’s brother Chris, are looking for Richard (James Pickens Jr.), unaware he’s working somewhere else now. Maggie offers to drive them over to Pacific Northwest General, and along the way, she learns Richard has barely spoken to these relatives in recent years.

At Pac North, the Webbers have their fraught family reunion—right before Sabi whips out a scan of a massive biatrial myxoma. It’s hers. And the scans are three weeks old, meaning this tumor is even larger now.

Maggie is rarin’ to operate, but Sabi doesn’t want her scrubbing in, even though she and Maggie are getting along famously. Sabi is weirded out that her cousin would be her surgeon. Maggie explains that she’s the best cardio surgeon in Seattle, but Sabi will not be convinced. When the tumor impinges on her airflow and she crashes, however, Chris grudgingly allows Maggie to operate.

But because this is a different hospital with different protocols, Maggie doesn’t know she ask to ask her underlings for updates on Sabi’s blood clotting, and thus, she doesn’t discover that Sabi has a resistance to the anti-clotting meds until it’s too late. Sabi’s blood clots clog the bypass machine, and the whole operation goes south from there. Alex (Justin Chambers) practically has to wrench the scalpel from Maggie’s hand, and he calls time of death. A tearful Maggie breaks the news to Chris. 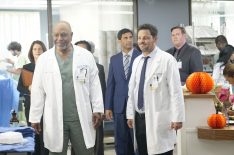 At the time of that devastating development, Richard had just connected with his brother. Chris and his wife had always resented Richard, it seems, for his ambition, but as they hunker down in the hospital waiting room, Richard and Chris connect over their love for their daughters. When Maggie comes in bearing bad news, though, Chris grows angry again, saying Sabi never wanted Maggie to operate. By the way, Catherine (Debbie Allen) had gotten to that Pac North waiting room to find Richard chatting with Gemma (Jasmine Guy), who had apologized to him for coming onto him at the diner. Gemma gives Richard and Catherine their space, and Richard tries explaining to Catherine that Gemma is just a friend. Catherine is unconvinced, however, and when she runs into Gemma outside the hospital, she offers Gemma an accounting position at the foundation. The only catch, however, is that there are no open positions in Seattle. (Uh-huh.) Amelia (Caterina Scorsone) has her own reason to head to Pac North: She wants to tell Owen (Kevin McKidd) she’s pregnant. She figures she owes that news to her ex-husband. She breaks the news, but before Owen can react, a trauma case arrives: a woman named Cassidy, who fell down a flight of stairs. Cassidy is also pregnant, and when she’s surprised that her fetus still has a heartbeat, the docs ask if she had intended to keep the pregnancy. She hadn’t. She has her hands full with her one kid, and she’s barely scraping by, working multiple jobs. Cassidy also explains she had given herself a double dose of an herbal recipe meant to terminate the pregnancy, and that double dose made her so dizzy that she fell. Amelia assures her that Owen can find a OB/GYN to terminate the pregnancy in the OR, but Owen says he’d actually like to operate on Cassidy’s injuries first and worry about the pregnancy later.

When they’re alone, Amelia accuses Owen of projecting his frustrations with Amelia onto Cassidy. After all, maybe Cassidy will wake up one day and want a child like Amelia apparently did, right? Owen agrees that that line of reasoning is absurd, but he’s still upset with Amelia for breaking up with him out of reluctance to start a family, only to start a family with Lincoln (Chris Carmack). Amelia explains to him that she didn’t change her mind, she just exercised her choice not to get an abortion. Cooler heads prevail, though. Owen has a chance to cool off in the OR, and he successfully operates on Cassidy, after which Amelia brings in a doc who gives Cassidy a pill to start the termination process. Outside the hospital, Amelia tells Owen that taking care of Betty and Leo with him reframed the idea of parenthood for her, and for that, she’s grateful to him. The two exes agree to be one big family with Link, Teddy (Kim Raver), Allison, and Amelia’s unborn child. Don’t you love it when our fave Seattle surgeons act like responsible, accountable adults?