On his first day back at work in October to shoot Sunday’s episode of NCIS: LA, Barrett Foa — aka brilliant technical operator Eric Beale — was lying face up in a chilly mud puddle, hands cuffed behind his back, in flannel space-print pajamas.

It was midnight and raining on the Paramount lot, doubling for the streets of San Francisco, where, in the drama’s 11th season, Beale has been on a clandestine mission for boss lady Hetty (Linda Hunt) — and off the show. He’s consulting at a security tech company, where dirty dealings may be afoot.

In the scene above, the nerdy character is on the run from assassins who have come to his apartment: “There’s a lot of chasing, and eventually I get arrested, kidnapped again, and drugged,” Foa says. “It’s the farthest from what you’ve seen Eric Beale do before.”

Although Foa was seen in the series’ October 13 episode, that appearance was taped last season. Producers created his character’s storyline so the actor could take a leave of absence to star in the Repertory Theatre of St. Louis’ production of Tony Kushner’s Tony- and Pulitzer-winning play Angels in America. He got rave reviews in the two-parter as Prior Walter, a man coping with AIDS. 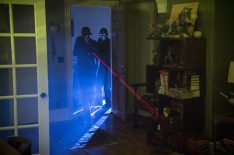 “It was a dream role in a dream play that was daunting for me: It deals with politics and sexuality,” Foa says. “But it’s good to shake things up. I did that with this episode too. Beale’s usually in ops with an earpiece and tablet. I loved getting out of the studio. I might have a cold now, but it’s worth every tissue.”

Foa assures us Beale survives the ordeal. And going forward, he and girlfriend Nell (Renée Felice Smith), who has been anxious about getting only cryptic messages from him, will likely have to deal with the repercussions of his assignment: “There’s bound to be a ripple effect.”