Can Shaun & Marcus Fix the Unfixable on ‘The Good Doctor’? (RECAP)

[Warning: The below contains MAJOR spoilers for Season 3, Episode 2 of The Good Doctor, “Debts.”]

Hopefully you weren’t eating while watching the first part of Monday’s episode of The Good Doctor.

A good Samaritan is brought into the hospital with half his face torn after he stepped in to help a woman being groped on the subway. Is there anything Shaun (Freddie Highmore), Marcus (Hill Harper), and Claire (Antonia Thomas) can do for him?

Elsewhere in the hospital, Neil (Nicholas Gonzalez) and Audrey (Christina Chang) navigate the complications of their personal and professional lives mixing when parents of a patient seek a new doctor.

On the personal front, Shaun is ready to swear off dating after what he considered a disastrous date with Carly (Jasika Nicole), while Claire struggles to deal with her mother staying with her.

And if you ask Morgan (Fiona Gubelmann), the most important thing is getting to be the first to lead a surgery, which means more competition with Alex (Will Yun Lee).

Love Is Worth It

While Lea (Paige Spara) thinks it’s time for Shaun to stop moping and “get back in the saddle,” since he likes Carly, he refuses to go on any more dates. “Dating is stressful, but being alone is worse,” she argues.

When Shaun stops by the lab, Carly says she had a really good time and wants to do it again. However, he tells her he had a horrible time and doesn’t want to do it ever again. She refuses to leave it at that and shows up at his house, insisting they talk. On a walk, she tells him her little sister has autism, and while growing up with her helps her understand him, she also wonders about herself. Did she date him to prove something, to make things better for her sister? She doesn’t think so, but they do have questions that can’t be answered over one dinner. “Don’t give up on love,” Glassman (Richard Schiff) advises Shaun, off Debbie’s (Sheila Kelley) insistence. Dating can be scary, but he still wouldn’t trade love for anything. Claire later informs Shaun that his and Carly’s walk was a non-date date, always good, and Marcus tells him that “very few things that are worthwhile in life come without a cost.” And so the episode ends with Shaun finding Carly in the lab for a non-date date of chips and conversation on the floor.

A patient is brought in with a shattered mandible and extensive damage to his face after he stopped a creep from groping a woman and the offender bashed his skull in with a skateboard. The woman is fine, the guy was arrested, and only the hero was injured. He’ll need extensive reconstructive surgery to save his jaw function. And to their surprise, he didn’t even know the woman. 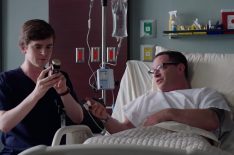 But once they get into an OR, they discover that they have to wire him shut. He’ll never talk or eat solid food again. “I needed to lose some weight anyway,” he writes, and that sense of humor comes into play multiple times during the episode.

In the end, Marcus refuses to wire his jaw shut and decides they’ll try to invent something. The only problem is no one can think of anything, even when Morgan and Alex join them for a late-night brainstorming session. Shaun refuses to give up, but Marcus tells him, “You are smart, and you’re creative, but there are things you can’t do. You can’t do miracles. You can’t fix the unfixable.”

Or can he? Shaun comes up with something in the middle of the night, and he and Marcus present it to Audrey the next day. But it’s never been done before and the risks are too high, she argues. Once she has Shaun leave, she suggests Marcus is asking himself if falling on his sword for Shaun was worth it. He insists on presenting it to his patient, even though she knows he’ll say yes despite the risks. She’s right, and he does (after pretending to change his mind). There is a complication during surgery, but it ends up a success. He can talk, just in time to meet the woman he helped. Why’d he step in? “I don’t know,” he admits. “You needed help.”

And Marcus did resent Shaun for the sacrifice he made. “But today, you made me proud of my sacrifice,” he tells him.

When a baby still can’t eat without vomiting following surgery, the parents decide they want a new surgeon for his next procedure. In turn, Audrey questions Neil about the first surgery and his methods and comes to his defense to the parents. But when she suggests he may have been too cautious, he takes offense. Is her attempt to not show favor to her boyfriend resulting in her overcompensating? They’re both still adjusting to her new role in the hospital.

Audrey leads the next surgery and discovers a second condition that caused the same symptoms. She has Neil lead the operation to fix it. And together, they deliver the good news to the parents.

Meanwhile, Morgan is determined to be the first to lead a surgery, even going so far as to bring Audrey baked goods. Alex leads her to believe that he, too, is putting in his bid for the honor with a pillow for Audrey, but later Morgan learns his box contained sample marketing pamphlets from a friend.

Morgan does need to cool it with trying to impress Audrey into giving her the first lead, going so far that Audrey calls her on it. But as Morgan points out, it shows that the surgery means something to her. Audrey takes that into consideration when she announces who will be the first to lead a surgery: Claire. And Morgan realizes Alex was campaigning for her to lose; he doesn’t want her to be his boss someday.

Claire’s mother loses her apartment, claiming it’s because it was rent-controlled when she lived there and not one of the many other reasons. But Claire knows that her mother is off her meds and has been drinking. It was a temporary setback, Breeze insists. She just needs to stay with her daughter for three weeks. Claire gives her one.

And she sticks with that until the end of the episode. Breeze can stay with her until she’s better, but there are conditions, like staying on her meds, undergoing drug testing, and making every one of her doctor’s appointments.

Do you think Claire will regret that decision?