What’s Next for Cara After the ‘God Friended Me’ Premiere?

[Warning: The below contains MAJOR spoilers for the Season 2 premiere of God Friended Me, “Joy.”]

Fans may be worried that Cara (Violett Beane) is still in Paris at the end of God Friended Me‘s Season 2 premiere, but she’s not going anywhere and is still very much an important member of the God Squad.

In fact, she learned a couple pieces of vital information in “Joy,” things she might not have uncovered if she’d still been in New York — and things that the rest of the Squad needs to know. With Simon’s (Adam Goldberg) help, she tracked down an old friend of her mother’s, Annie (Susan Misner), but it wasn’t an entirely joyous reunion.

As Cara learned from the tech billionaire, Annie had been working on a story about him stealing the code five years ago. He not only killed the story but also discredited her. She never worked as a journalist again. And when Cara revealed she was in Paris working on a book about him, Annie no longer wanted to speak with her. Also, get a look at a 'classic God account' moment.

At the end of the episode, Annie apologized for her behavior. She also brought up Cara crediting her earlier with finding her mother, and Cara explained it was the Facebook message she sent her five years ago that her mother was in New York. But Annie never sent that message, the one responsible for Cara moving to New York, meeting Miles (Brandon Michael Hall), and eventually reconnecting with her mother.

Cara figured there could be only one explanation, one person who could have hacked Annie’s Facebook account because they wanted her in New York to find her mother and meet Miles: the God Account. That means it has been pulling the strings for longer than they imagined. “Maybe it still is,” she told Simon. “I don’t think I’m here just to write your book. I think the God Account wants me here for something bigger.” That does seem to be the only logical explanation, and it’s one way to keep her linked and very much part of the God Squad without needing friend suggestions where she can help in the premiere or only pulling her in via conversations with Miles. She might have felt like she was only still part of the team after helping with Joy’s (Jessica Lu) friend suggestion and watching the viral video, but as Miles told her, she will always be part of the team.

And now, she’s also on her own path and looking for answers only she can find right now. How long has the God Account been pulling the strings? Was it responsible for the message that led Cara to New York? (The answer to that is almost certainly yes.) Was that the first move it made in any of the God Squad’s lives? If so, why? If not, what was? What does the God Account want her to do in Paris? And how will everything connect back to what’s going on in New York? Is there any connection to the message Miles received from the God Account in the final scene, “Follow the Lady. Find your Path.”? 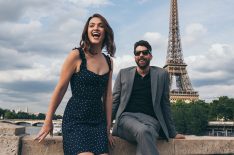 Whatever happens, we know that it will likely lead to her working with Miles and Rakesh (Suraj Sharma) once again.