Aaron Korsh knows you can’t please ’em all. Even after giving Suits fans the marriage of Gabriel Macht and Sarah Rafferty‘s #Darvey, the return of Mike Ross (Patrick J. Adams), and a long-overdue family for the phenomenally complicated Louis Litt (Rick Hoffman), the showrunner is sure the romantic, eventful, and sharply executed series finale will leave somebody wanting.

“I don’t know if I gave them everything they wanted,” he good-naturedly admits to TV Insider. “I’m sure they’ll find something. ‘It was a secondhand wedding and they deserve better’ or something. But we tried to make it just a satisfying conclusion to this nine-year journey we’ve been on.”

Wrapping any series is daunting. Wrapping one that was as smart and sophisticated as Suits and landing each character on the canvas at a place that would allow for a believable future was something entirely different.

First off, Korsh needed to resolve the matter of Bar Association pill Faye Richardson (Denise Crosby), who had infiltrated the firm hellbent on ending Harvey’s career. Once she’d forced him and Louis to represent her in a wrongful termination case brought on by Samantha (Katherine Heigl), Korsh saw the chance to spread out the eventual Fall of Faye over two obscenity-filled episodes. 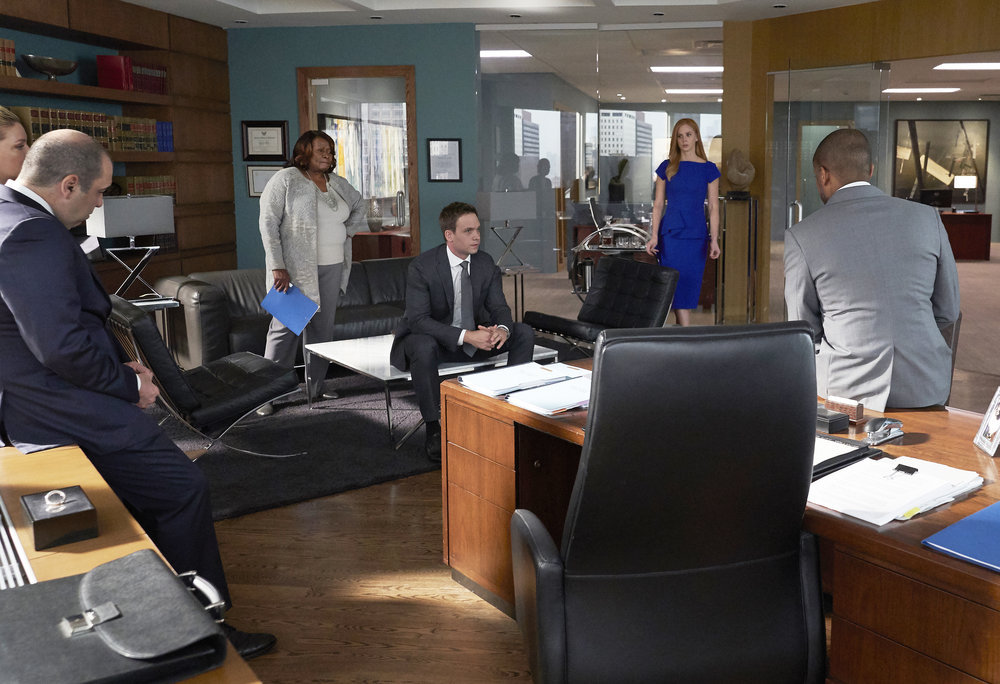 “So much cursing!” he laughs. “I look at Episodes 909 and 910 almost like it’s one big episode because we would not have been able to close out this thing, the case part and getting rid of Faye in one hour. That happens in the first half of the finale… so the truth is, Episode 909 is basically an episode-and-a-half long and then we have a half an episode of saying goodbye basically. And I was very glad we got to do that.”

Another element of the ending he’s happy about is the rise of Harvey Specter’s altruistic side. As part of the deal to rid the firm of Faye, Harvey agreed to step down, announcing later in the finale that he and new bride Donna (one of our all-time favorite TV characters, style icons and role models) would be heading to Seattle to work with Mike and presumably, wife Rachel (Meghan Markle). “I knew that I wanted Mike to come back and I wanted Harvey and Donna to leave with him,” Korsh recounts. “I believe that idea happened while we were filming Episode 816.”

Confirming that once Harvey and Donna got together in that steamy season-finale moment, “I knew I wasn’t going to break them up,” the next move was to find a way to reunite Harvey with his old associate. Bringing in Faye, he continues, allowed the writers to “shine a light on the ethical decisions these people have made over the years and ask them ‘Are you happy with who you are?’ I thought the fun answer would be for Harvey, ironically, to conclude ‘I shouldn’t stop crossing lines, I just want to start crossing them for the good guys.'” 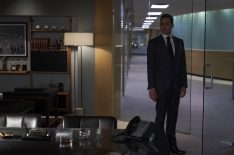 'I feel I've put some creative good into the world,' says the actor.

Of course, that life-changing choice didn’t come out of thin air. “Faye said Harvey was the cancer [in the firm], right?” notes the exec-producer. “So Harvey sees if he leaves, he can get her out. And that’s the other thing… over the years, people have taken the bullet for Harvey. Jessica (Gina Torres) took the bullet for Harvey when she left. Zane took the bullet for him last year. Mike even went to jail. So in his mind, he’s gonna do the ultimate selfless act and lay down on the tracks for everyone else at the firm.” 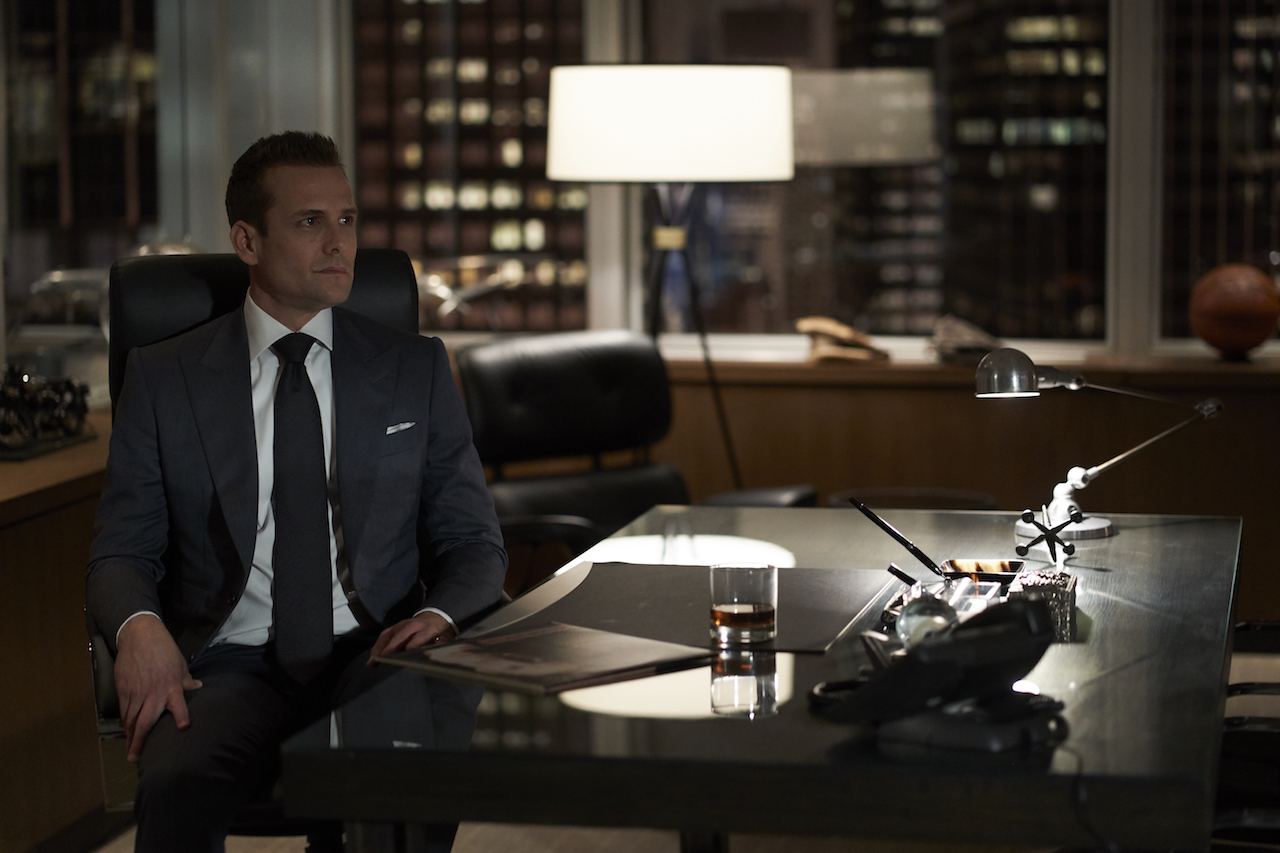 That the fallout from this sacrifice would mean freeing Harvey up to first, finally commit to Donna by marrying her, and second, go work with the guy he’d hired as a fraud nine years ago “just seemed right,” offers Korsh.

Along the way, everyone else had their own stories to settle. Some portions we didn’t even see. “At the table read of the finale episode, it ran too long and we had to make some cuts,” he reveals. Among the suggestions were to finish Louis’ scenes at the hospital following Baby Lucy’s birth, which Korsh and fellow writer Genevieve Sparling weren’t having. “We’d never see him again because he’s good with this family? We were like, ‘No, he has two families and you need to make sure he’s taking care of both of his families. So we kept the scene, obviously, when he comes back to ask Samantha to be his Harvey and then they join Alex (Dule Hill) to promote Katrina (Amanda Schull).” Instead, it was decided to axe a shot of Donna exchanging a knowing nod with Katrina on her final exit from the office — “they share a nod and it was so nice but it took like 15 seconds” — and a bit at Louis’ abbreviated wedding where Mike Harvey, Donna, and Zane (Wendell Pierce) are joking about how far they had all come after years of hating the groom.

In addition, there was a planned moment featuring a call between Harvey and former boss Jessica Pearson. “Part of the phone call was Harvey saying he got the flowers she sent for his mother just to kind of explain why Jessica wasn’t at the funeral.” Unfortunately, by the time Korsh got around to making his directorial on the finale, Torres was “basically burning the candle at every end” working on and promoting the Pearson spinoff. “We just couldn’t make it work logistically.”

And speaking of logistics, Korsh even toyed with trying to see if Meghan Markle could clear her royal calendar. “I did contemplate calling her agent and seeing if she could make it,” he confesses. “But I just decided to respect her new life…I knew the answer would be no [and] I didn’t want to put her in the position of having to say it.”

Plus, you never want to ruin a Duchess’ makeup. “You know, everybody cried [at the end]. Sarah Rafferty started crying around episode two….she definitely did cry the most,” states Korsh, adding that both Macht and Hoffman shed some tears, as did Adams, who had already gotten “really choked up when he had left the show” back in Season 7. “He teared up this time, no doubt about it…I mean, everyone was emotional.” And if you weren’t feeling a tad misty during that final-moments memory-lane sequence that prominently featured Torres, Markle and so many great scenes from the past, then you are as cold as Faye Richardson and must be destroyed, as well. So what’s next? While Korsh has no set plans as of yet, he is not short on inspiration. “Rick Hoffman has not shy about telling me he wants to do a Louis Litt spinoff called Litt City,” he admits with a laugh. “And I think fans want a Donna prequel, another show about what she’s doing after Suits and then another show that’s all the scenes of her outside of the office during her time on Suits. They want all Donna!”

That would suit us just fine.