[Warning: The below contains MAJOR spoilers for the Season 2 premiere of New Amsterdam, “Your Turn.”]

Fans were left waiting all summer to find out who died in the finale ambulance crash … and they were kept waiting throughout the New Amsterdam Season 2 premiere.

“Your Turn” slowly — and tragically — revealed that Max (Ryan Eggold) lost his wife Georgia (Lisa O’Hare) after she suffered a brain bleed. “Our season really is about grief and loss and finding the hope through that, that glimmer of life we can follow,” executive producer David Schulner told TV Insider. “Max always seems to find hope in tragedy.” But can he do that this time?

Here, Schulner breaks down the intense premiere and previews what to expect this season. What went into the decision to reveal who died the way you did?

David Schulner: We knew we couldn’t reveal it until the end. We wanted people to keep watching, but it had to feel different. It’s such a horrible thing to do to a character, to an actor, that we wanted to give it its due. It needed to be as special as the person we were letting go. We felt we owed it to the story, these characters, and our audience to handle this with both delicacy and suspense.

Why did you choose to kill off Georgia in this way?

When I wrote the pilot, writing Georgia coming into the hospital with the placenta previa, with Luna being in such a precarious place, I knew the end of Season 1 was going to be the birth of Luna and it was going to be a difficult birth. I tried to set that up in the pilot episode. As we got closer and closer to the finale, I totally chickened out. I didn’t want to do it. I didn’t want to hurt this character, this actress. I love them both dearly, but it became very clear I was chickening out. It was something I set up in the pilot and I like symmetry, in life and in stories, and I knew that the finale needed to connect to the pilot.

How will Georgia’s death affect Max moving forward? Will he continue to see her?

You will find that out in Episode 2. … The season is about grief and loss and how our lives can change in a moment, and Max won’t be the only one experiencing death. All of our characters, even the ones who weren’t involved in the accident directly, it’s profoundly changed their lives. Iggy (Tyler Labine) wanting to expand his already huge family. Dr. Sharpe (Freema Agyeman), Dr. Bloom (Janet Montgomery), Floyd (Jocko Sims) and Evie (Margot Bingham), these relationships are all going to be reevaluated in the wake of the accident. Is losing Georgia going to change his relationships with Helen or Bloom simply because they lived and she didn’t?

Max’s relationship with everyone is going to change. He has nothing but gratitude for Helen and Bloom, but anyone who tries to help Max is going to be rebuffed. Max does not want anyone’s sympathy or anyone’s support, at least not now.

And he just got good news about his cancer in the premiere. What can you tease about that road ahead for him?

That’s such great news, and yet Max will find out it’s almost meaningless without Georgia. He’s grateful he’ll survive for his daughter, but the person he wanted to get better for was Georgia, and now she’s gone. Max will be struggling with how to find happiness. 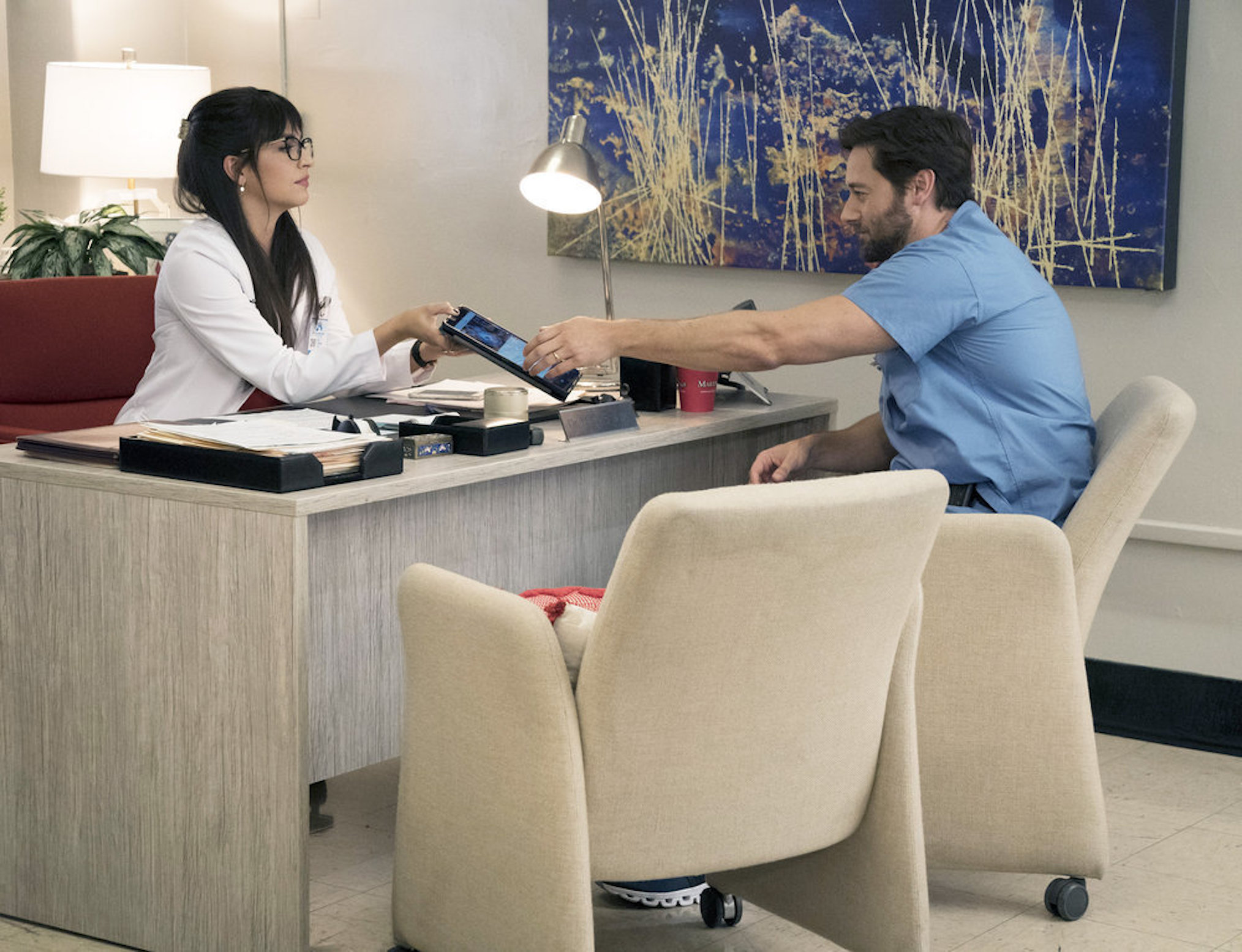 We met Max’s new oncologist, and things are quite antagonistic between her and Helen. Is that going to continue and will her tactic to use Max’s treatment work for Valentina to get what she wants?

It has already in Episode 1, where Sharpe agrees to share her department with her. Sharpe also knows this is a revolutionary treatment that three years ago helped one percent of the cancer population and a couple years later is helping five percent of the cancer population, including Max. If this is a treatment Sharpe can give to all the oncology patients at New Amsterdam, it’s worth giving up half her department for, as hard as that’s going to be going forward.

How is Helen doing after the accident? In the premiere, we see she’s been away because of work, but is part of her also avoiding the hospital because of what happened?

I think so. In a couple episodes, we’re going to find out Sharpe did something rather drastic after the accident as well and how the accident has affected her. Even though she wasn’t hurt physically as much as anyone else, emotionally, she had to reevaluate parts of her life.

We saw her and Bloom have that nice moment together at the end of the premiere. Will we see more of that friendship this season?

Absolutely. It’s something we love and didn’t have the room last season to get into as much as we will this season.

Bloom’s back at work. Will she be a different doctor and person after what she’s been through, last year and with the crash?

Sadly, it’s going to take more than almost losing a leg to change Bloom. She’s still the same short-fused, sarcastic, crazy, adrenaline junkie that we’ve hopefully grown to love. She’s the worst person to have a physical injury because she won’t take painkillers. She’s so new to her sobriety, she doesn’t want to jeopardize it, even if it means suffering through enormous amounts of pain. Will there a point even Max no longer wants to ask, “How can I help?” of his patients or the other doctors?

I hope not. Some days will be harder than others, but Max finds such solace in being able to help other people because it’s a lot easier than helping himself. Max enjoys helping other people, so I don’t think he’ll ever get tired of saying, “How can I help?” The other doctors might get tired of hearing it.

You mentioned Iggy expanding his family, but will we see him fighting to balance work with his home life? He managed to make it work in the premiere, but I can’t imagine that’s going to be the norm.

I totally agree. How often we fail one part of our lives, whether it’s work or home life, we never feel we get the balance right. Iggy and his family are going to be struggling with, “Why would we add more when we’ve finally gotten this under control?” We’re going to get into what makes Iggy tick the way we get into what makes his patients tick. Are we going to see him in therapy?

He’s going to need it. He and Martin are going to definitely need some couples therapy after this.

Reynolds is seeing the next generation. How is it going to go for him this season?

It’s not going to go well. Evie’s in San Francisco, which Reynolds is not handling very well. He’s having to plan a wedding by himself essentially. With that kind of added level of anxiety in his life, he, for better or worse, latches on to this new intern, who is going to complicate Reynolds’ life way more than Reynolds had bargained for. What else can you tease about the season?

We’ve been talking about Rikers and all the inmates who get transferred to New Amsterdam. In our big fall finale, Episode 9, our doctors are going to Rikers Island to help those patients directly.

Should we worry about them going there?

Yes, you should absolutely be worried.

I’m just imagining the fall finale ending with a cliffhanger involving one of their lives in danger.

We’re definitely going to end on a cliffhanger, but I don’t know how many lives in danger we can stomach after the premiere. We’ve got a couple other things up our sleeve.

Does that mean we shouldn’t worry about someone else we’ve grown attached to dying?

No, you should be worried. But hopefully we’re going to be doing something that no one is expecting us to do. The ramifications of going to Rikers will play out when we pick up in Episode 10.