Worth Watching: ‘American Horror Story’ Goes to Camp, Lilly Singh in Prime Time, Finales From ‘Talent’ to ‘South Side’

American Horror Story: 1984 (10/9c, FX): Not that this freaky franchise has ever been afraid of embracing camp — as in lurid, over-the-top, anything-goes outrageousness — but in the ninth season, AHS literally goes to camp in an homage to the Friday the 13th-style slasher genre. Fittingly, the new season harks back to the 1980s, when this drive-in-movie style of sex-begets-violence schlock first came into vogue. The story will follow (and likely dispatch of) five cuties from L.A. who head to haunted Camp Redwood as counselors. Is anyplace safe? Probably not. Jason Voorhees, find yourself a copyright lawyer. From 'Murder House' to 'Apocalypse.'

A Little Late with Lilly Singh: The Primetime Special (10/9c, NBC): In case you’re not inclined to stay up till the wee hours to check out NBC’s latest late-night personality, the network is giving Lilly Singh an hour in prime time (preceded by the America’s Got Talent finale) during her inaugural week to promote her brand of comedy and talk. The special will feature a mix of celebrity interviews, sketches and games. You know, kind of like The Tonight Show — only with that rare breed of late-night host: a female. 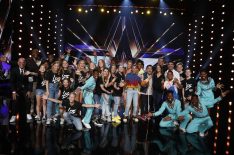 Find out who's one step closer to winning Season 14.

Finales: Obviously, the biggest blowout belongs to NBC, with its two-hour extravaganza in which a winner of top-rated America’s Got Talent (8/7c) will be named… Also expanding to two hours for its finale: Fox’s MasterChef (8/7c), with the top three home cooks returning to the kitchen after a trip across the pond and a visit to their home towns. To win, they must impress the judges with a deluxe three-course meal… USA’s Suits spinoff Pearson (10/9c) closes out its first season with Jessica (Gina Torres) in her usual hot water at the mayor’s office, though she may have a cunning solution for dealing with her activist cousin, Angela (Chantel Riley)… Already renewed for a second season, Comedy Central’s South Side (10/9c) closes shop with back-to-back episodes, in which Kareme (Kareme Young) cooks up a scheme involving mild-sauce meatballs, then invests with Simon (Sultan Salahuddin) in a new cryptocurrency, called Litcoin. What could go wrong?

A Little Late With Lilly Singh