Ahead of Episode 2, we spoke with co-creator, writer and executive producer George Pelecanos (The Wire, Treme) about where the story is heading. He opens up about everything from guest star Corey Stoll‘s roll to Candy’s ending. Plus, he teases what fans can expect from the latest installment of the risque show below.

Candy (Maggie Gyllenhaal) is continuing to fight for her creative vision when it comes to her films. Will she find some semblance of freedom before the series wraps?

I think it’s going to be surprising what happens with Candy. Consistent with her character, though — we always try to keep to that. The word redemption always gets banged about in the film industry and in television. There’s different kinds of redemption and it’s not always a glorious redemption. Sometimes it’s in retrospect and that’s all I can really say about it. I think her arc is really incredible and people are going to like what happens. In the season premiere, Candy met Hank (played by guest star Corey Stoll). Can we expect to see more of him, and if so, what should we anticipate from his role?

Obviously, when you see an actor of his stature — and he appears for five minutes in the premiere — [you know] the role is going to get bigger. It’s not that much of a spoil to say that he’s going to become her boyfriend and they’re going to fall in love. In Season 2, she thought she found someone who she could be comfortable with because he worked in the same industry as her and he was taking her for who she was and not because she was a porn star. That’s all important too, because men will be men. This guy really doesn’t care until he does. That’s all I’m going to say. We’re lucky to get a really good actor to play that role.

We saw Lori (Emily Meade) exit rehab only to fall back into her old habits with cocaine during New Years Eve. Should we be worried?

I think you have to go back with Lori to Season 1… She always has to have someone, even though C.C’s (Gary Carr) gone, her boyfriend now is in his own way a pimp. He’s freeloading off of her fame and her money and so on. Bobby (Chris Bauer) expressed concern about his sexual health when he went to have his blood tested. Is there a change on the horizon for his promiscuous behavior?

I don’t think so, I mean you saw what happened to him in the first episode — he broke his promise right away as soon as he had a couple of drinks. Bobby’s the typical man, I’m not sure he wants to change. If you’re looking for someone who is struggling with the gender politics and so on, it would be Vincent — James Franco. That’s the male gaze that we filtered those things through. I think Bobby is going to be pretty much a rock in a dumb way. He’s a dumb rock. Vincent (James Franco) and Andrea (Zoe Kazan) seem to be rekindling their relationship this season. How will that impact his bond with Abby (Margarita Levieva)?

Well, it’s important to know that they’re still in love. They’re struggling with a couple of things. One thing is that [Abby]’s growing and changing as a person and he’s not. She’s coming into her own as a mature woman. Vince just still wants to have fun. So there’s that widening gulf between them.

I sort of love that moment in the premiere episode where he’s going back to the bar and they kissed. You can just see it, there’s very little dialogue there but you can see it in their eyes that they really love each other. We saw this from the beginning as a tragic love story that two people who are in love, but ultimately can’t and probably shouldn’t be together. The HBO series, starring Maggie Gyllenhaal and James Franco, returns for its final season on Monday, September 9, on HBO.

What else should fans look forward to this final season?

We covered the year of 1985, and the episodes do accelerate dramatically. David [Simon] and I always knew how the series was going to end. We had the ending when we first set out to do this, the question was how to get there. There’s going to be a lot of complex drama. I think people, when they look at the series as a whole after watching this season, they’re going to really be satisfied with what we did. We’re very proud of it, and there’s a lot of surprises in store. So I hope people stay with the show. 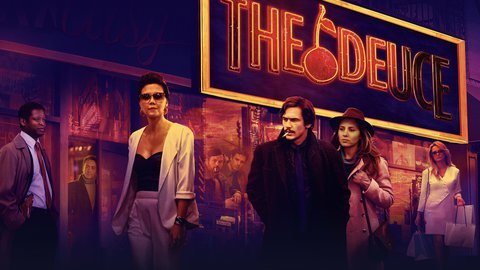