Lights Out for Pearson

Question: Can you help Pearson, USA’s spinoff of Suits, with their light bill? The director is in love with low-light shooting. I am sure that real people do occasionally use their lights. I am about to stop watching because of this. — H.M.

Matt Roush: As my own review indicates, written after trudging through the entire first season (felt more like a slog than a binge), there are plenty of reasons to bail on this show — if only because it wastes the great Gina Torres and her once-fabulous character of Jessica in such a dreary and familiar story. But yes, this particular complaint is a frequent one, about TV shows which often overuse opaque cinematography in an attempt to convey dark moods. Sometimes it can be effective when treated more sparingly. In this case, it’s just another reason to yawn. Question: I still have not seen any word on one of my favorite shows, Queen of the South, as far as renewal for another season. Is it ending or what? I hope if it is not renewed that the creators are given a chance to give it a proper ending — let’s remember that this whole show started with the queen being shot and then reverted to flashbacks to tell her story — otherwise there would be a lot of questions left unanswered.

Another favorite of mine is NBC’s The InBetween, and I was excited to see that if it is renewed the new villain-to-be would be Christopher Heyerdahl, who is noted for playing the villainous Swede on Hell on Wheels and a vampire on Van Helsing. — JV

Matt Roush: Last year, Queen’s renewal wasn’t announced until October, so it could be a bit of a wait to know for sure — there’s no telling about the timing of such news. Still, I’m betting that whenever USA decides to end this show, they’ll do it like Suits, announcing a final season in advance to give fans closure — and as noted in the question, bringing the series full circle to its melodramatic framing device. As for The InBetween, that’s anyone’s guess. Hard to say where the bar is set these days regarding marginal summer series on the broadcast networks. This hasn’t been a particularly kind year to these scripted summer space-fillers, and there are quite a few still awaiting word on whether they’ll go another round or get cut short. 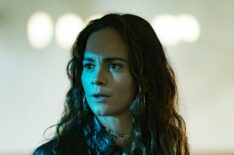 All In on Holey Moley

Question: In these harrowing news days, the arrival of Holey Moley on ABC offers a refreshing antidote. It feels good to laugh out loud at the hilarious Rob Riggle and to be wholesomely entertained by this adaptation of something normal: miniature golf. Surprisingly, it has become my favorite show simply because I feel happy while it is on. They alluded to a second season during the final episode. I hope with all my heart it will return. — Pam B

Matt Roush: I’d be surprised if this doesn’t return next summer, given the talent (including Stephen Curry) behind it, and the fact that it’s harmless, cost-effective programming. I’d expect Holey Moley could be a summer staple in the tradition of Wipeout, which it closely resembles in tone. It’s all a bit silly for my taste, but I totally get why people would retreat to a goofy diversion like this — if not to an actual miniature golf park — to escape the madness of our times. A Break with Credibility

Question: I know you usually deal with prime-time programming. But I hope you can get a message to the producers at NBC Nightly News. Here’s the headline: Knock It Off with the Breaking News Already! For the past few weeks, Lester Holt‘s newscast has been filled with bright red banners breathlessly proclaiming nearly everything as “Breaking News.” As someone who worked in local news for nearly 40 years, I get the temptation. It makes a show more exciting and relevant. Except when it doesn’t. I analyzed a few days’ worth of shows and discovered, with one exception (the death of Peter Fonda), every story NBC called “Breaking” during the period was in fact at least six hours or more old. One was 13, while another took place the day before! In one show, they did it on eight stories in a row! As anyone who’s done this can tell you, if you have a pre-produced reporter story, complete with ready-made graphics, it didn’t just take place within the hour. With journalists already under attack for spreading “fake news,” NBC is making it worse for all such shows. So put on the brakes and give viewers a break from all that “breaking news.” The only thing really breaking is your own credibility. — Aaron F

Matt Roush: This seems a fair criticism, that when you hype every story as “breaking,” it lessens the impact when an actual news event of urgent import is unfolding. Plus, it’s cheap hucksterism. I had a similar reaction during NBC Nightly News coverage of Jeffrey Epstein’s jail-cell suicide when the headline behind the anchor was dripping with fake blood. What a tabloid turn-off. We, and Holt, deserve better. 6 Mysteries We Need Solved After 'The InBetween' Finale (PHOTOS)

The Family That Hates Together…

Question: I absolutely LOVE Yellowstone. I know there are things that we haven’t yet uncovered about John Dutton (Kevin Costner), but down deep he seems like a strong man who puts family first. Perhaps he was distant after losing his wife, but the contempt his children have for him…I just don’t get. Thoughts? — Kim

Matt Roush: Revisiting the subject since this is the last chance we get to discuss Yellowstone before its season finale on Wednesday (Paramount Network, 10/9c), and this echoes the recent discussion in this column about Beth’s vicious loathing for brother Jamie. The way I see John Dutton is as a classic anti-hero, whose drive to build and save his ranch was achieved so ruthlessly that it pretty much destroyed his family, made worse by the premature death of a wife who (while also a tough cookie from what we’ve seen in flashbacks) could have smoothed out his rough edges. His children obviously did everything they could growing up to incur his favor, or even love, often at the cost of their own souls. They all see their own damage as coming from the top, blaming their father even as they revere and fear him. It’s complicated, as it ought to be, and casting Kevin Costner in the role, working against his own early career image as an admirable hero, reminds me how it felt back in the day when they would cast someone like Henry Fonda or James Stewart against type as a villain.

Question: Will Pose be on for another season? This week ended the current season and Everything seemed to be wrapped up rather tidily in last week’s season finale. I love the show and it is so real. — Jerry

Matt Roush: Thankfully, FX gave Pose an early renewal for a third season. I love the fact that both seasons have ended on exultant, upbeat notes, not with cliffhangers. The first year, I felt it was because they weren’t sure if they’d get a second season because the show was so original and groundbreaking. Now I believe they’re giving each season a big and true finish because it’s creatively and emotionally satisfying.

Question: What the heck ever happened to the last Jesse Stone movie? We were told it was filmed and would be out some time this year. — Lynda

Matt Roush: Don’t know who told you that, but I’d check your sources. It’s impossible to keep up with everything, so I checked with Hallmark, which has rights to a 10th Jesse Stone film when the time comes, and there has been no movement yet on this front. Tom Selleck has often said when he has time to write and/or produce one during a Blue Bloods hiatus, it will someday happen. But for now, we’ll just have to be patient. Question: Like others, I’m really sad to see Instinct go! Is there any chance of Instinct finding another home on another network or going to Netflix or Hulu? — Unsigned

Matt Roush: Still getting a lot of outraged mail over this cancellation, but it seems unlikely Instinct would end up on another platform, having only two short seasons and a mere 24 episodes in its library. As most shows are nowadays, it was an in-house CBS production, so I doubt they’d be shopping this around to a competitor.