Trust us, the game show, The Misery Index hosted by The Good Place‘s Jameela Jamil is way more fun than its name implies.

In each episode, two contestants try to make it to the final round to win up to $30,000 by guessing how a team of therapists ranked cringeworthy real-life experiences — like a city councilman leaving his mic on when he uses the restroom during a meeting — on their Misery Index.

The scale from 1 to 100 factors in physical pain, emotional trauma and long-term psychological impact. Members of the Tenderloins comedy troupe, the stars of truTV’s Impractical Jokers, advise the players.

Jamil recommends watching with a group. “It provokes a lot of conversations and arguments, because you’re deciding which things are worse. It’s quite a cool way to find out if the people you’re friends with are sociopaths,” she says.

The actress is teaming up with the Jokers for new TBS game show, 'The Misery Index.'

While most incidents are comically bad, some require a strong stomach, such as seeing a subject have a decades-old zit popped. “That was the closest I came to throwing up on set,” Jamil says. “I apologize in advance.” 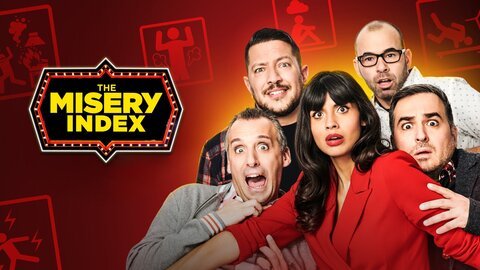