Worth Watching: ‘GLOW’ Glows Again, ‘WE Day,’ Return of ‘What Would You Do?,’ ‘Jett’ Finale

GLOW (streaming on Netflix): What happens in Vegas is worth betting on, as the third season of the delightful comedy follows the endearing G.L.O.W. crew through their residency in a Sin City casino. As they grapple with long-distance relationships and the grind of putting on a show night after night, Ruth (Alison Brie) must deal with Sam’s (Marc Maron) growing attraction to his star — and maybe vice versa? You can’t go wrong getting in this ring. The Netflix show's cocreator previews how the ladies' long-distance relationships will create 'a lot of added obstacles.' Jett (10/9c, Cinemax): The first season of the kickass thriller ends with its title con-artist heroine (Carla Gugino) making a move to sever ties once and for all with Bestic (Greg Bryk). But first, the gangster reveals the backstory of his beef with Charlie (Giancarlo Esposito), which is how everyone got in this perilous mess in the first place. 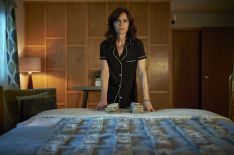 'It's a character akin to something you might see Lee Marvin do in 'Point Blank,' or a young Clint Eastwood,' Gugino says of her role.

What Would You Do? (10/9c, ABC): The hidden-camera series that stages provocative scenarios returns for a new season with Dancing with the Stars’ Nyle DiMarco as a guest. He observes a situation he knows all too well and reflects on his own history when a deaf person is bullied while trying to place an order at a restaurant. (The point being to see if anybody comes to the customer’s defense.) In another segment, based on a news story, a white woman threatens to call the cops on a black man babysitting white children in Biloxi, Mississippi. Appalling behavior, yes, but will bystanders intervene? John Quiñones is back as anchor.

Inside Friday TV: Streaming on Amazon: Free Meek, a five-part documentary series about hip-hop star Meek Mill’s legal battle for exoneration, exposing a probation and parole system weighted against African-Americans… Morgan Taylor Campbell (Death of a Cheerleader) is a Deadly Influencer (LMN, 8/7c) who takes social media way too seriously as she eliminates high-school rivals. When a new student (Abby Ross) shows promise as a fashion blogger, it’s up to the girl’s mom (Anne Dudek) to put a stop to this insane Instagrammer… Proving once again that music is a universal language, PBS’s Great Performances presents Vienna Philharmonic Summer Night Concert 2019 (9/8c, check local listings at pbs.org), with L.A. Philharmonic conductor Gustavo Dudamel leading the renowned European orchestra through a program of classics from the U.S. and the old world. Highlights include Leonard Bernstein’s “Candide” overture, Gershwin’s “Rhapsody in Blue,” Max Steiner’s music from Casablanca — and, you guessed it, a Viennese waltz by Strauss.