Line of Duty’s anti-corruption officers have been slugged, shot at and even shoved over a bannister in pursuit of “bent coppers” — as crooked police are called on this hugely popular British procedural. But in Season 5, creator and writer Jed Mercurio has newly promoted AC-12 Detective Inspector Kate Fleming (Vicky McClure) and Detective Sergeant Steve Arnott (Martin Compston) facing what may be their most grueling battle yet: bringing down an organized crime group and its suspected leader (Boardwalk Empire’s Stephen Graham), responsible for the deaths of three officers during a hijack.

As Kate and Steve investigate a possible connection between the gang and a corrupt senior police officer with the initial H, the integrity of their respected leader, Superintendent Ted Hastings (Adrian Dunbar), comes under scrutiny. “They have to regard themselves as police officers first and friends second,” says Mercurio. “Clearly we want to exploit the dramatic potential of those divided loyalties.”

Mercurio certainly knows how to deliver on dramatic potential. The finale of his thrilling Netflix series Bodyguard was the most watched drama last year in the United Kingdom (where both shows air on the BBC). Line of Duty’s sixth and final episode is the top TV show over there for 2019; it kept 9.1 million viewers on the edge of their seats when it aired earlier this month.

Credit nail-biting action, complex characters and intricate plotting for its success. Interrogation scenes — some of which run more than 10 minutes — are intense and dramatic, while seeds that were planted in previous years are still bearing fruit, and there’s always a shocker lurking in the shadows.

But will H’s identity be revealed in the 90-minute finale? “You’re going to find out enough to make you understand more about it,” Mercurio replies — an answer as cryptic as many of the clues he drops in his scripts.

No worries, since the series has been picked up for a sixth season. In fact, in the U.K., Line of Duty has become a sensation similar to Game of Thrones, with viewers dissecting clues, formulating theories on social media and worrying about whether fan-favorite Hastings, who always insists his officers conduct their investigations “to the letter of the law,” could actually be as bent as some of the coppers he’s arrested. Says Mercurio: “We’re very grateful that the word of mouth on this show is so strong.”

Season 5 focuses on Graham’s character, John Corbett, and his partner in organized crime, Lisa McQueen (Rochenda Sandall), who have an undercover officer embedded within their gang. Mercurio set out to explore controversies connected to UCOs and their behavior. “Over here, there have been a number of officers who were deep undercover who completely departed from what they were meant to do and actually ended up living quite happily within the organizations they were meant to be investigating,” he says.

While each season casts a new guest actor as a person of interest to AC-12 — Thandie Newton and The Walking Dead’s Lennie James have starred in previous years — Line of Duty has been anchored by Compston, McClure and Dunbar, whose characters, though flawed, have been embraced by viewers for their sense of duty, as well as more colorful things: Steve’s snazzy vests, for example, and Hastings’s snappy Northern Irish expressions (“Now we’re sucking diesel”). 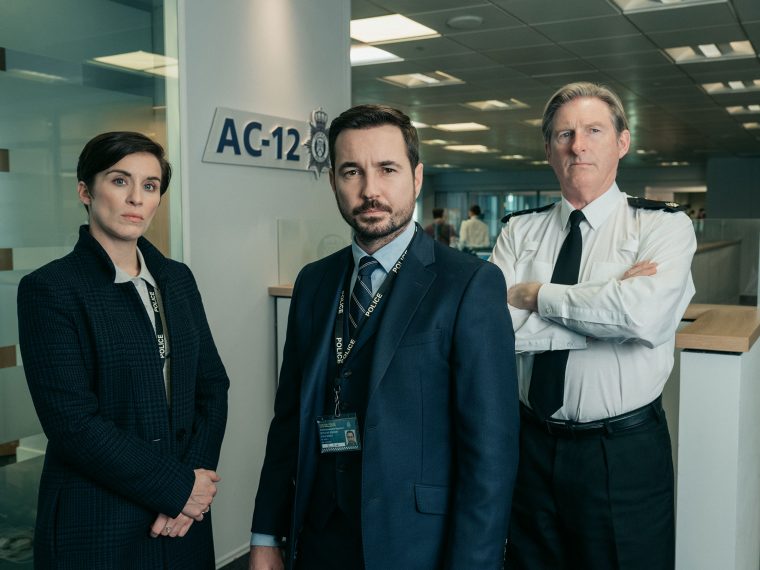 Having killed off characters at surprising points in his shows, Mercurio won’t promise that something couldn’t happen to one of them. “No one is immortal on this show,” he says, “and I think if the storyline was right, the regular characters would be just as vulnerable as any of the other characters.”

But don’t expect work partners Steve and Kate, whose personal lives continue to be messy, to take a romantic interest in each other. Mercurio has considered it, “and it’s something that we’ve discussed with the cast as well,” he says. “It’s just something that’s never felt right.”

A former doctor and Royal Air Force officer, Mercurio broke into television writing a medical drama, but had an affinity for crime shows when he was growing up in England in the 1970s and ’80s. There are nods to them in Line of Duty, including an Ironside reference in Season 4 and police stations named after ones mentioned on the groundbreaking cop drama Hill Street Blues (Polk Avenue and Decker Avenue).

And those programs had an effect on his writing. “People remarked that my scripts moved quite fast for U.K. scripts, that the scenes tended to be shorter and the dialogue faster,” says Mercurio. “Maybe that’s because a lot of U.K. TV writing came out of theater and followed that style, whereas my knowledge of British theater is dwarfed by my knowledge of shows like Star Trek and Hill Street Blues.” Mercurio even got to collaborate with revered Hill Street Blues creator Steven Bochco, who died in 2018, on a couple of pilots that weren’t picked up. “It was an amazing dream come true to be working with one of my heroes,” he says. “He was just really brilliant.”

And although he’s committed to upcoming seasons of Line of Duty and Bodyguard, Mercurio isn’t ruling out future work in the U.S. “If the right opportunity came along,” he says, “I’d definitely be interested.”

Hill Street Blues where to stream