JAG In, Code Out?

Question: There are rumors that the upcoming appearances in May on NCIS: LA of JAG stars David James Elliott and Catherine Bell, reprising their characters of Harm and Mac, could work as a “backdoor pilot” to revive the series that spun off NCIS in the first place. If CBS does bring back JAG, what does it mean for The Code? — Christa

Matt Roush: First things first, of course, but it’s a fair question, especially given CBS’s tendencies. While the network is currently staying mum on the notion of a JAG reboot, speculation is understandable given the still potent draw of this brand-name series and its original stars. Should it happen — and that could still be a mighty big “if,” because it likely wouldn’t come cheap — a JAG 2.0 would be a natural fit on a network that still leans heavily on the military procedural genre JAG instituted all those years ago. And you’re probably right that this might not be good news for The Code, which like JAG is a blend of military mystery and legal drama, and hasn’t exactly popped, so it’s unclear if it can stand on its own on Mondays. The next few weeks should confirm whether The Code is a keeper, but a JAG comeback might make that decision moot.

Did They Axe the Wife on Billions?

Question: I’m a dedicated watcher of Billions on Showtime but I’m wondering what happened to Bobby “Axe” Axelrod’s wife and family? I feel like they just disappeared without their departure being addressed in the storyline. Or, did I blink and it [happened]? — Claudia 'Billions' EP Previews What's Next for Axe, Rhoades & the Crew in Season 4

Plus, catch up on where we left off with the main characters in Season 3 ahead of the March 17 premiere.

Matt Roush: Billions seems to have answered this question in the episode that aired Easter Sunday, when Lara (Malin Akerman) returned for a cameo so that Axe (Damian Lewis) could give his blessing for her and the boys to relocate to California. Part of this was determined by career moves, as Akerman has filmed a lead role for an NBC pilot and was already curtailing her appearances on Billions. Writing her out after the marriage had already fallen apart also makes dramatic sense, and allows Axe to move forward, maybe, with Rebecca (Nina Arianda).

Question: I love Supergirl, but feel The CW is an ill fit for the show. I loved that first CBS season where it had a lot more polish and went for a broader audience. What are the chances it will return to the Tiffany Network? — Dale 'Supergirl': Jon Cryer on Becoming Lex Luthor & How His Version Compares to the Comics

The 'Two and a Half Men' alum also reveals how he was cast in the iconic role and what to expect next.

Matt Roush: Zero. CBS isn’t a hospitable home for the superhero genre, whereas it’s practically The CW’s reason for existence anymore. However you may feel about the show’s current quality, Supergirl is a key player in the network’s DC universe, including with crossovers. As long as it’s on the air, it will be on The CW.

Question: I’ve seen a couple of promos in which they looked like crossovers between Supergirl and Charmed (2018). By any chance, might there be a plot in which the two shows may cross over with each other? — Elizabeth

Matt Roush: Not that I’ve heard, and I’d think it unlikely, though not impossible. The main reason the network would pair the two series in promos is to bring visibility to the fact that they both air on Sundays (a new programming night for The CW) — and because they share a certain girl-power vibe. Since both have been renewed for next season, though we don’t know if both will still air on Sundays, it’s always possible the network might try to find a way to bring their very different worlds together for a stunt. But it sounds like a stretch. Besides, Supergirl already has her hands full preparing for the next DC superhero crossover.

Question: I think the kids problem that Modern Family has is starting to affect the kids of black-ish, who at first were cute because of their out-of-touch and naive qualities, but now it seems those qualities are grating. Especially Junior, who was a lovable nerd in early years but has become a bit of a know-it-all douche. What is it with family shows not being able to adapt to the children’s growth? And it’s not a new thing. It has always been this way. — Marjorie

Matt Roush: I agree. This is nothing new. The challenge for any family-based sitcom is that eventually, if the show is successful enough, they’ll have to deal with the fact that the kids in the family will probably outgrow their initial cuteness, and with it many of the traits that made them amusing to begin with. Shows like The Middle are beyond rare, where the kids stayed funny throughout and adapted their quirks to their evolving personalities as they got older. With black-ish, there’s still some comic gold in the twins, because Jack and Diane are such polar opposites, and she in particular has always been mature beyond her years, sometimes terrifyingly so. They solved any problems with eldest daughter Zoey by giving her a college spinoff, grown-ish (not unlike Denise Huxtable graduating into A Different World), but Junior is an odd duck for sure, and while his awkwardness can read as arrogance, the real issue is that insecurity can seem less endearing for a young adult who should be getting his act together by now than it was for an adolescent. Farewell to the Dunphy-Pritchett family.

Will Loser Ever Return?

Question: I have a question about a show we haven’t seen in a while and I don’t remember it getting canceled. The show I am referring to is The Biggest Loser. I know it wasn’t everyone’s favorite in reality shows, but I always watched. Have you heard if it is ever coming back or has it bit the dust? — Terri D

Matt Roush: Sometimes shows aren’t officially canceled as much as they are merely not renewed. That was the case with The Biggest Loser, which hasn’t aired since 2016, when it signed off amid much negative publicity including reports that former contestants had gained their weight back and allegations of rigged weigh-ins and charges that some contestants were given drugs. I’m not sure how any or all of that played out, but it was enough to give NBC pause. Any time I’ve checked about Loser’s fate, I’ve been told the show is not currently in production and beyond that, no comment. It was a popular enough franchise that I wouldn’t be surprised if it might return someday, but a comeback doesn’t appear to be on the immediate horizon. 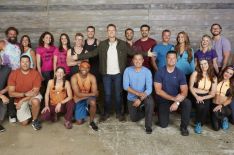 The Demise of Crime Watch

Matt Roush: Syndication is a tough business, which means your understanding tracks with mine. This decision wasn’t so much about the quality of Crime Watch Daily as the efficiency of picking up a package that would reflect the potent brand name of ID true-crime shows and presumably be a lot cheaper than keeping Daily in original production. When Warner Bros. lost those station groups, which were instrumental in the launch of Daily, that was pretty much the end of the road. True stories of love and deception from the people you least expect.