You are cordially invited to the long-awaited nuptials of Blue Bloods‘ NYPD Sgt. Jamie Reagan (Will Estes) and Officer Edit “Eddie” Janko (Vanessa Ray) on Friday, May 10.

Joining the Reagan clan at the celebration — shot last month at NYC’s Basilica of St. Patrick’s Old Cathedral, built in the 1800s — are Eddie’s mom, Lena (Christine Ebersole), and a number of the couple’s friends and coworkers. Jamko's getting married in the Season 9 finale.

“We had over 400 people, amazing flowers, and a beautiful church,” says Estes. “And I wore a morning suit and tails!”

Not to be outdone, the bride is elegant in a strapless Marisa Collection champagne lace A-line gown with a train. “It was fitted so well that my ribs were bruised after wearing it all day,” Ray reveals. Of course, no big event on Blue Bloods goes off without a hitch. Teases Tom Selleck, aka police commissioner Frank Reagan, “There are some surprises.”

“It’s cool that we can give the audience this special moment, displaying Jamie and Eddie’s love and the family’s love for them,” says Ray of the Season 9 finale. (The show has already been renewed for fall.) The heartfelt occasion wasn’t lost on the actors either. “We were all moved,” Estes adds. 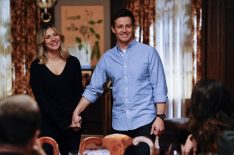 From wedding dress shopping to meeting the in-laws, check out Jamko's journey to the altar.

Will Frank walk Eddie down the aisle in the absence of her jailed dad? “Eddie’s very independent — and Frank hasn’t been asked,” Selleck teases.

Naturally, Jamie’s niece and sister (Sami Gayle’s Nicky and Bridget Moynahan’s Erin) are among the well-wishers, but as with a real wedding, the guest list snowballed. Ray put in a special request with executive producer Kevin Wade for one invitation: “I only asked for Eddie’s new partner, Officer Rachel Witten [Lauren Patten].”