Arrow (8/7c, The CW): A change of pace for the noir superhero adventure series, marking its milestone 150th episode in the form of a mock documentary, “The Hood and the Rise of Vigilantism,” narrated by the august Kelsey Grammer. While Oliver (Stephen Amell), Felicity (Emily Bett Rickards) and the gang reflect on their legacy of crime-fighting in what is described as a love letter to Arrow fans, there is, as usual, a new threat facing Star City to contend with. A hero’s job is never done.

The Good Doctor (10/9c, ABC): TV’s most emotional medical drama has been especially moving lately, as Dr. Shaun Murphy (Freddie Highmore) learns the best way to be there for his friend and mentor, Dr. Glassman (Richard Schiff), who’s suffering through chemotherapy for his brain cancer. This week’s primary medical story also seems primed for waterworks, when Dr. Andrews (Hill Harper) urges a grieving family to donate their daughter’s face for a transplant surgery for another young girl whose face was disfigured in an accident. 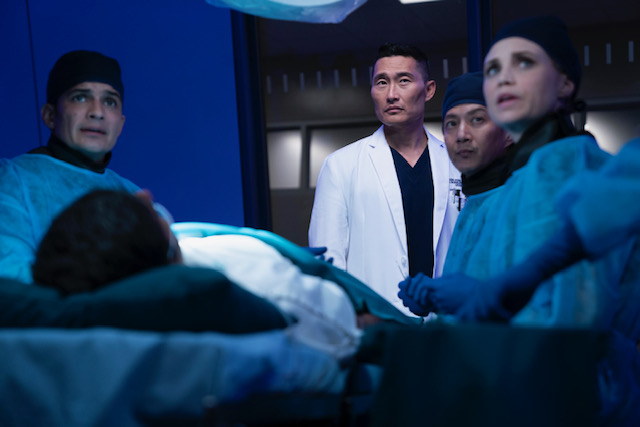 Man With a Plan (8:30/7:30, CBS): Matt LeBlanc returns for a third season of a sitcom representing all that he used to mock on Showtime’s satirical Episodes. That said, this unremarkable domestic comedy is probably a better fit for The Neighborhood than the mercifully defunct Happy Together. The new season begins with Adam (LeBlanc) trying to “wife-proof” his office and make it more appealing for Andi (Liza Snyder), now that she’ll be joining him at work each day. Imagine the possibilities!

Inside Monday TV: The spotlight on CBS’s The Neighborhood (8/7c) turns to the wives, Tina (Tichina Arnold) and Gemma (Beth Behrs), when they take a girls’ trip to Las Vegas. Which means Calvin (Cedric the Entertainer) begrudgingly asks neighbor Dave (Max Greenfield) over for a guys’ night at home… Danger escalates on Fox’s The Passage (9/8c) when the vampiric virals gain more power over the staff at Project NOAH, forcing estranged agents Wolgast (Mark Paul-Gosselaar) and Richards (Vincent Piazza) to work together to take down an affected rogue soldier… Don’t be misled by the title of Epix docuseries Elvis Goes There (10/9c) to think “the King” has come back to life. This is a travelogue featuring entertainment journalist Elvis Mitchell as he traverses the world with noted filmmakers to learn how certain locations informed their work. First stop: London, which Paul Feig (Bridesmaids) credits for influencing his style and sense of humor… PBS’s Independent Lens presents the provocative documentary Black Memorabilia (10/9c, check local listings at pbs.org), which explores an underground commerce of objects that project racist stereotypes, and profiles a Brooklyn artist who uses minstrel images to strip them of their demeaning power.