‘Ride With Norman Reedus’: The Host Reveals How He Keeps the Series ‘Authentic’

Let’s start by stating the obvious: Norman Reedus is cooler than the rest of us. When the actor isn’t busy shooting AMC’s zombie megahit The Walking Dead — he’s been oozing effortless gravitas and sex appeal as postapocalyptic survivor Daryl Dixon for nine seasons and counting — he hops on his motorcycle in search of adventures.

And thanks to the docuseries Ride With Norman Reedus, now hitting the road for Season 3, fans get to tag along — as do the famous friends who join him on his journeys. Learn about Michonne's final run on the show.

Upcoming itineraries include a trip to Nashville with rocker Marilyn Manson and an English excursion with Walking Dead comrades Jeffrey Dean Morgan and Andrew Lincoln. Here, Reedus gets revved up.

What is it about seeing the world via motorcycle that appeals to you?

Norman Reedus: I just love meeting people and seeing new things. When you do it on a motorcycle, you really get a vibe for the country or town you’re in — you can smell it and hear it. It’s like riding a magic carpet!

How do you decide where to go and whom to invite?

I always want my guests to have some connection to the location. This season, Melissa McBride [The Walking Dead’s Carol] and I went to Scotland; she has family buried there but had never been. I told her, “Get your motorcycle license, and we’ll do it.” And we did it! No matter where your travels take you, you seem to encounter fans.

When we started out, we didn’t know yet what Ride was gonna be. At first it was kind of a gearhead show where we’d talk to bike builders about engines. But because of the popularity of The Walking Dead, people would come out of the woodwork, and those interactions became part of it.

Did you ever think you’d get paid to ride bikes all over the world?

No way! But even if the show didn’t exist, I’d still be spending my time off doing what we’re doing on Ride. I want to keep it as authentic as possible. When I take off my helmet, I have helmet hair. If I didn’t, the whole biking community would be like, “Why does his hair look perfect?”

Plus, check out an exclusive clip below: 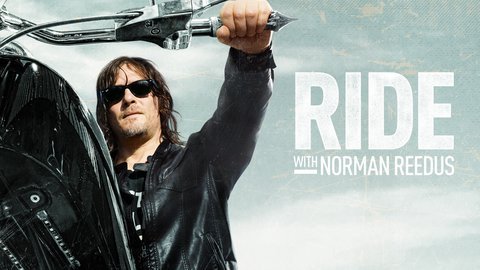