Worth Watching: ‘Kimmy Schmidt’ Finale & ‘Black Earth Rising’ on Netflix, ‘Strike Back’ Is Back

Unbreakable Kimmy Schmidt (streaming on Netflix): Even gloriously silly things must someday come to an end — and so we have the final six episodes, bringing closure to the wacky misadventures of cult survivor Kimmy (Ellie Kemper) and her newfound family of lovable eccentrics. Look for a Sliding Doors parody, special guest stars (Lisa Kudrow, Greg Kinnear, Zachary Quinto) and one last musical show-stopper from Tituss Burgess as flamboyant roomie Titus. 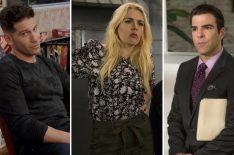 Be Our Guests! Check Out Who's Coming to 'Unbreakable Kimmy Schmidt' (PHOTOS)

With only six episodes left, the award-winning comedy crams in everyone from Greg Kinnear to...Trump?

Black Earth Rising (streaming on Netflix): A critical hit in the U.K. last fall, this emotionally charged eight-part political thriller stars Michaela Coel as Kate, a legal investigator who as a child was rescued from the 1994 Rwandon genocide and adopted by Eve (Harriet Walter), a London-based criminal prosecutor. When Eve heads to the Hague’s International Criminal Court to take on the case of a mercenary Rwandan general, whom Kate considers a hero, shocking secrets from the past are exposed. John Goodman (The Conners) co-stars as Kate’s American boss, who knows more than he’s letting on about her tragic family history. 'Black Earth Rising' Is Your Next Political Thriller Binge on Netflix

Other Netflix premieres on a typically busy Friday include a second season of Medici: The Magnificent, which jumps ahead 20 years to the 15th-century reign of Lorenzo (Daniel Sharman), who clashes with banking rival Jacopo de’ Pazzi (Sean Bean); and the movie Polar, starring Hannibal’s Mads Mikkelsen as an international assassin whose retirement is interrupted by a youthful army of killers out to take him down. Co-stars include Vanessa Hudgens, Vikings’ Katheryn Winnick and Richard Dreyfuss. 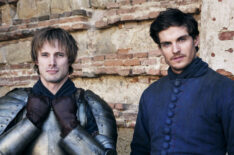 The series takes us inside the conflict between the Medici and Pazzi banking families in the 15th century. Yes, there are sword fights!

Fresh Off the Boat (8/7c, ABC): How to celebrate Louis’s (Randall Park) milestone 40th birthday? Because he just watched Legends of the Fall, dad thinks a family camping trip is a great idea — though no one else agrees. And Jessica (Constance Wu) turns to Honey (Chelsey Crisp) for gift ideas. Followed by a new episode of Speechless (8:30/7:30c in which Dylan (Kyla Kenedy) is understandably gobsmacked to learn that people see her as a mini-Maya (Minnie Driver) — so sets out to behave any way that may distinguish her from her overbearing mom. Strike Back (10/9c, Cinemax): Section 20 is back in action — though some of the members might quality for Section 8 — for the sixth season of the high-octane military adventure series. The new mission, taking the special-ops team to Kuala Lumpur (filmed in Malaysia), involves a Russian plane that crashes into the South China Sea and a missing cargo of nuclear warheads. With a new commander (Battlestar Galactica’s Jamie Bamber) in charge, the team crosses paths with a mysterious Russian agent, Katrina Zarkova (Yasemin Allen), whose loyalties aren’t immediately clear.