After two and a half seasons of venturing through architect-created neighborhoods, demonic museums, the chambers of an eternal judge and down to Earth itself, The Good Place has finally made it to its titular destination. And true to form for this show, heaven definitely isn’t what you’re expecting.

Namely, the crew is disappointed because they’re stuck in a less-than-ideal location (and the only door that will open for humans is 500 trillion miles away) and solving the issue of the Bad Place’s tampering with the afterlife is far easier said than done.

Thankfully, Michael has a plan. Less thankfully, and much like Michael’s other plans, it certainly isn’t foolproof.

The episode opens with the crew realizing they’re in The Good Place and putting plans in place to make sure they’re not followed or recognized by anyone who would send them downward. Michael says they have to make sure no one can follow them, which Janet takes care of by destroying the mailbox they’d just come through. But this complicates the second part of Michael’s plan: keeping a low profile. 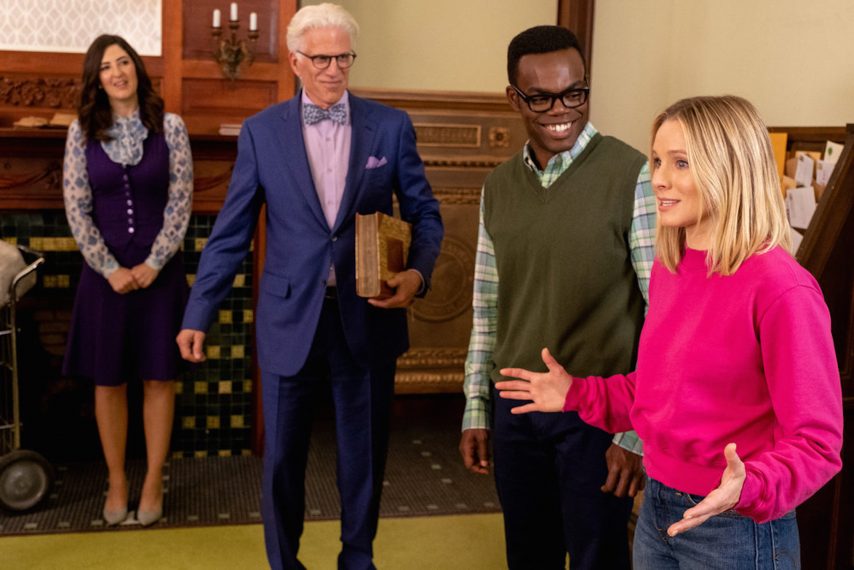 He quickly comes up with a story; he’s an accountant, Janet is a Neutral Janet (she quickly changes her wardrobe to the beige worn by her boring brethren) and the humans have “won a contest.” It’s a good thing Gwendolyn, the correspondence center employee in the office, is accepting of their outlandish story.

From there, the group splits into three different storylines for the rest of the episode; Eleanor and Chidi in one storyline, the trio of Jason, Janet and Tahani in another, and Michael in one.

Eleanor and Chidi Get To Know Each Other (Again)

If last episode saw Eleanor and Chidi finally realizing their feelings for each other, this episode was about them taking those feelings to the next level. Frustrated by the fact that heaven is only “four Oreos” away behind the door, Eleanor nearly has a breakdown — until Chidi reassures her he’s right there with her and he loves her, and they have a date, of sorts.

They open a bottle of champagne, sit down at a table, and talk. Chidi says he has a surprise for her; he changes into a mailman outfit, which Eleanor, uh, should certainly appreciate. Or at least, she usually would — but instead of gettin’ it on, she gets really, really upset.

'The Good Place' Leaves Earth Behind in 'Janet(s)' (RECAP)

Delivering a half-hour filled with humor, heart and plot twists, the show finally showed us a glimpse at a very, very important location.

Eleanor explains she’s never had a relationship she’s scared to lose before, and Chidi suggests that they shouldn’t worry about the future. He uses her own words — “You gotta try” — to calm her down, which works, and then Eleanor suggestively says she has an idea of something they could try. They race up the stairs together, so…apparently, the mailman outfit worked after all.

Well, it’s not so much a love triangle as it is “Tahani’s attempts to fix things between Jason and Janet backfire.” As they clean up the mailroom after the explosion Janet caused, Tahani encourages Jason to be honest and talk about the video he saw that proved Janet’s love for him. He takes her advice, but an embarrassed and trying-to-be-“neutral” Janet has no inclination to discuss the matter further. While Jason goes to help Gwendolyn, Tahani tries to talk to Janet. She apologizes for encouraging Jason to talk, but this only upsets Janet further — she’s embarrassed because Tahani saw the video, she’s none too pleased about Jason being married and she’s feeling stressed about having to be a Neutral Janet so their cover isn’t blown.

Tahani keeps trying to help and makes up a certificate that says her marriage to Jason was annulled by their deaths. It backfires again; Janet says she feels pitied and put on the spot, and Jason’s not happy to be reminded he’s dead. Tahani puts “cancelled” on the certificate, tears it up and runs out of the room.

Michael Goes to the Committee For Help

The most forward motion in the overall storyline is brought in this episode by Michael, who goes to the committee for help with the Bad Place’s tampering with the points system. After talking to Gwendolyn about how he’d reach the committee — and, despite it being against the rules, she takes it as a “thought experiment” and gives him every detail of how it could be done by picking up a phone in her office — Michael reaches out to them, and they convene an urgent meeting. Michael gives his presentation to the six committee members based on the Book of Dougs and uses Doug Forcett as an example of a good man who’s nowhere close to heaven. The committee agrees to help, but there’s a catch — because of regulations and rigid rules, the group won’t make any progress for thousands of years.

Dejected, Michael is sitting on a desk and moping when Tahani walks in. He explains the unsavory situation to her and, after hearing him out, she asks him how she can make Jason and Janet happy when everything she does makes their situation worse. Tahani says there are too many unintended consequences to her well-intentioned actions, and it feels like a game she can’t win.

As it turns out, that was exactly the idea Michael needed. He looks up two Dougs in the book of Dougs who did the exact same “good” action: They gave roses to their grandmother for her birthday. While the Doug who lived in the year 1532 gained points, the other Doug from 2009 lost them because he bought the roses on a phone made in a sweatshop, the roses were grown with pesticides, picked by exploited migrant workers, etc. Michael realizes the Bad Place isn’t tampering with the points system, but rather, being a good person on Earth is getting harder. Though Michael didn’t address her problem, Tahani solves it by going to Janet and apologizing again, and then telling her she loves her and Jason and wants them to be happy. Both of the women start crying, and when Jason walks in, he starts crying. Gwendolyn sees that and gets suspicious, and when Eleanor and Chidi walk into the room and Eleanor announces they just had sex in a closet(!!!), Gwendolyn says she’ll need to turn them all in to the Judge.

Michael counters that there’s no need to do that, because he already has. A door appears behind them, the doorman steps through, and he tells them she’s agreed to their terms and will meet them at IHOP. Apparently, the Inter-dimensional Hole of Pancakes is the most dangerous place in the universe, and the gang walk through the portal to meet Judge Gen and save humanity. No pressure.