The Young and the Restless‘ Sharon (Sharon Case) has been supportive of daughter Mariah’s (Camryn Grimes) relationship with Tessa (Cait Fairbanks) — until now.

She’s taking serious issue with it considering Tessa has been revealed as the blackmailer who tried to fleece Nikki (Melody Thomas Scott) out of some big bucks! Mariah’s torn over how to proceed, but Sharon’s not – and this has caused a rift between the two. Read on as Case gives insights into the current dilemma between mother and daughter, why Nick (Joshua Morrow) keeps coming back into her life, and new rival Mia (Noemi Gonzalez).

What are Sharon’s concerns about Tessa?

Sharon Case: Mostly, the blackmail. She now knows Tessa has seen the footage [of J.T., Thad Luckinbill] and instead of coming to us or Mariah, which would have been a sign that she was on our side, she blackmailed us for quite a bit of money! We’re all freaking out over this and it turns out to be Tessa. The stakes were too high. That’s what changed Sharon’s mind about Tessa. Push came to shove and Tessa wasn’t taking the side of people important to Mariah. Mariah came into Sharon’s life later in life; does that affect how she’s reacting?

I don’t think so. Sharon’s protective of all her children. Sharon and Mariah are mother and daughter, but they’re also friends, I think, because she came into Sharon’s life later. Mariah’s her daughter, but she’s also her friend.

Camryn, of course, did a beautiful job in those coming out scenes last year, but you were great also, supporting her; there was a lot of emotion in those beats Sharon took before responding to what her daughter had to share.

Thank you. It was really [Camryn’s] scene about her character, but yes, my job was to try to add in a lot of subtleties, things Sharon was thinking but not saying. One would have a lot of things racing through their mind and you might decide to be quiet until you know just the right thing to say. Crimson Lights has expanded and is being used more than ever. Who knew there was an apartment upstairs?

I love it! I love using the coffee house more. I’ve always felt that set photographs well. It’s always well-lit and it’s fun. It reminds me of when Julianne [Morris, ex-Amy] and Eddie [Cibrian, ex-Matt] were on the show. We were kids then and it reminded me of Friends and how the characters on that show were always in [Central Perk]. It’s nice to have a scene that’s in a place where people come in and out and not just be in a living room.

Speaking of Julianne, a Y&R rerun aired on the west coast recently due to a news pre-emption on the east coast. It was the episode in which Nick had all these fantasy scenes with Amy and other women in his life.

I didn’t see it, but a lot of people told me that was the show that aired. I remember doing that episode. It was a good choice to put on due to a pre-emption because it’s nice to see characters you don’t normally get to see.

Sharon has a new rival in Mia. What’s their dynamic like?

It’s nice to have a new adversary around especially since Sharon and Phyllis (Gina Tognoni) have mostly had to cool theirs because of the pact [over J.T.].

What has Sharon learned about being with men who are involved with other women?

I think Sharon doesn’t want to end up getting hurt again. She’s being careful not to get involved with somebody else’s marriage. Even if Rey (Jordi Vilasuso) and Mia are headed for divorce, Sharon knows what it’s like to have another woman come along when you’re still married. She’s thinking about that, not just her own selfish desires.

Nick and Sharon have gotten to the altar twice in recent years only to have someone or something stop them from re-tying the knot. Do you feel that ultimately, Nick is the one for Sharon?

Well, I do. Yeah. I do. The journeys [with other love interests] along the way are a part of it. I think this reflects what can happen in real life. Some couples are together forever. Others have shorter relationships. A lot of us do have that one person who comes in and out of our lives forever. You hope that each time you reconnect that this will be the time it all works out. Even when it doesn’t happen there’s still the feeling that you want it to. You try to move on your life and you do, but some of us have people who just keep coming back. It’s the one person you can’t give up on. I don’t know if any of us knows who that person really is. 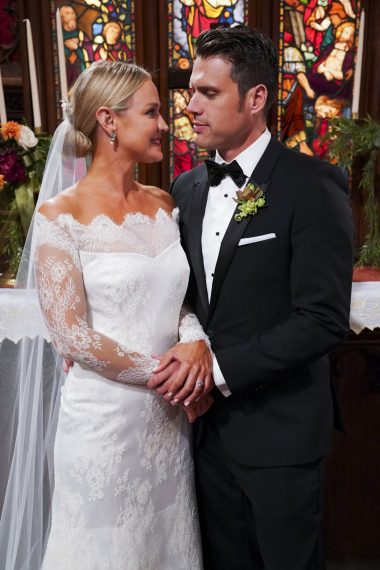 Sharon, Nikki, Phyllis, and Victoria (Amelia Heinle) are in deep with the cover up. It’s ironic because if Nikki hadn’t stepped in and struck J.T. with the fire poker, he could have killed her daughter. But now, it’s the cover up that’s the crime.

Isn’t that true? The cover up is always worse than the crime.