Busy Philipps isn’t holding anything back in her upcoming memoir, This Will Only Hurt a Little.

The actress is claiming that her former Freaks and Geeks co-star James Franco bullied her and once pushed her to the ground while filming the 1999-2000 TV series.

“He grabbed both my arms and screamed in my face, ‘DON’T EVER TOUCH ME AGAIN!'” Philipps writes. “And he threw me to the ground. Flat on my back. Wind knocked out of me.” She’s describing a scene where her character was supposed to hit Franco in the chest, but then she alleges he became enraged and broke character. 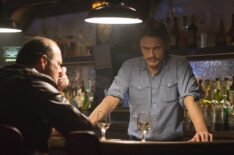 The HBO series will jump six years into the future for its second season.

Philipps played Franco’s on-again-off-again girlfriend, Kim Kelly, and revealed after the incident she ran into the trailer of another co-star, Linda Cardellini, and “sobbed” as she explained what happened.

Franco stormed off the set after and only apologized to her the next day because the director and executive producer Judd Apatow allegedly ordered him to.

This isn’t the first time Philipps has acknowledged the incident.

On Andy Cohen’s late-night show, Watch What Happens Live, she said, “[Franco] felt like he wanted his character to be one way. He had a discussion with the producers that he came from an abused family or something, and so he didn’t want his girlfriend — I played his girlfriend — to ever physically hit him.” 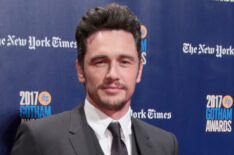 Two of the five accusers spoke out about their experiences with Franco.

“I never knew this conversation existed, and in an improv, I smacked him on the thing, and he was like, ‘Don’t ever touch me,’ and grabbed me and shoved me to the ground. It was an overreaction by a 19-year-old dude. And it was weird and people’s agents had to be called and he had to apologize to me,” she continued.

Franco’s been keeping a very low profile after he was accused by five women of sexually inappropriate behavior in a report by The Los Angeles Times in January. He’s denied the allegations and is still on HBO’s The Deuce.

Philipps has also been vocal about her support of Brett Kavanaugh’s accuser, Dr. Christine Blasey Ford, after revealing that she herself was raped at age 14.

#tbt This is me at 14. The age I was raped. It’s taken me 25 years to say those words. I wrote about it in my book. I finally told my parents and sister about it 4 months ago. Today is the day we are silent no more. All of us. I’m scared to post this. I can’t imagine what Dr. Ford is feeling right now.

This Will Only Hurt a Little comes out October 16.