Toby Whithouse is no stranger to Doctor Who, having now written six episodes of the rebooted time-and-space-traveling series over the 10 years it’s been on the air. Recently, he wrote a two-part episode for this season, “Under the Lake” and “Before the Flood,” the latter of which finished airing on Saturday night. We caught up with the writer, who also created the popular UK show Being Human, at New York Comic Con to pick his mind about the episodes and talk about the Doctor’s new sonic sunglasses. Here are all the details that he revealed to Whovians about his episodes.

Pitch Perfect: Working With Steven Moffat
“The way I work with Steven is that he gives me a one or two line pitch,” explained Whithouse of his writing process for a Doctor Who episode. “So, for example, when I did [the episode] ‘The God Complex,’ a couple of years ago it was, ‘The Doctor and Amy are trapped in a hotel and the corridors keep moving.'” For Whithouse’s pair of episodes this year, Moffat’s pitch was ghosts. “Steven said, ‘Let’s find a proper science-fiction explanation for ghosts.'”

Location, Location, Location: Finding the Right Setting
The first thing to decide was where both episodes were going to be set. “Like all kind of haunted house stories, you want them locked in somewhere,” explained Whithouse of his choice to strand the Doctor and Clara in an underwater base.

Mystery Machine: The Doctor’s Mind Boggle
“In this particular story, [the Doctor and Clara] have stumbled across something that is out of even his field of experience,” says Whithouse of the Doctor’s notable lack of expertise. “He’s found a genuine mystery, and for him, there’s nothing more exciting in the world. He thrives on that.”

Paradox Lost: Taking a Cue From a Short Story
In the first few minutes of “Before the Flood,” the Doctor mentions the “bootstrap paradox” and tells viewers to “Google it.” Whithouse says he was inspired by the Robert A. Heinlein short story, By His Bootstraps. “I was very young when I read this story, and it just blew my mind,” says Whithouse. “I was very excited when I realized there was an opportunity to explore this within the story [of the episode].” I Would Do Anything for Who: Clara’s Loyalty
A theme in both episodes is Clara’s willingness to do whatever it takes to help the Doctor. Whithouse credits that to the “incredibly intense and exclusive” relationship the Doctor has with his companions, likening the Doctor to the cool friend you want to impress. “[The relationship] makes you a more foolhardy person. You take risks,” says Whithouse. “That’s something the Doctor does to people, and I think he’s kind of aware of that characteristic.”

In “Under the Lake,” the Doctor actually discusses this with Clara briefly. “There’s that conversation in the first part, where [the Doctor], perhaps too late in the day, is trying to get Clara to sort of tone it down a little bit,” says Whithouse. “It’s sort of inevitable that a relationship with the Doctor is going to affect you in that way.” 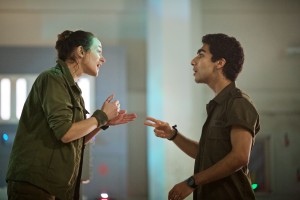 Read My Lips: Including Sign Language
Cass, the leader of the Drum crew, is deaf—as is the actress portraying her, Sophie Stone. Whithouse says this came by way of his need for a character who could read lips in a way that was organic to his story. This, in turn, led to the creation of a second character, Lunn, Cass’ sign language translator. Whithouse didn’t think much of it at the time, but viewers have responded quite positively to Cass’s character. Not just because the character is “heroic and clever and stands up the Doctor,” but also because her deafness becomes “innocuous after a while.”

Whithouse feels a responsibility to create special needs characters and cast actors who have them. “What’s curious is that no one has asked me about the fact that there are three actors of color, and why should they?” pointed out Whithouse. “We need to get to a point where [special needs] is as un-noteworthy as that.”

Doctor Doctor: Writing for Different Personalities
Having written for three different incarnations of the character, Whithouse says he’s approached each of the Doctors as if they are different characters. “As an example, David’s Doctor would never need the emotional cue cards because he was a very human Doctor,” says Whithouse of the cue cards that Peter’s Doctor needs to help guide his reaction to human situations. “With Peter, it just felt appropriate for that character.” But, he notes that there are certain traits that remain true to each Doctor. “They’re always the smartest person in the room, and they will always be the one running towards danger,” says Whithouse. “They will always be inquisitive and mischievous.”

Cue and A(berdeen): Sarah Jane Smith “Returns”
Whithouse says he wasn’t responsible for the Sarah Jane reference in the Doctor’s cue cards. “I just had in the stage direction that the Doctor has cards and they flip through them and choose one. So that was the prop guys.”

Mural Juror: The Monster Under the Sea The mural in the underwater base is not a reference to Star Trek. Whithouse had simply mentioned in the stage directions that he wanted a mural of a sea monster eating sailors. “This is how clever the props people and set designers are; the design of the Fisher King’s face is similar to the monster in the mural because it’s suggesting that, after the flood, there are old myths and legends about this weird creature that people think they’ve spotted. And it’s taken on a life of its own. So it’s as much of a bootstrap paradox that there are myths and legends of this monster that was killed.” A Clockwork Squirrel: It Really Exists!
When Clara points out that the Doctor took apart his alarm clock to build a clockwork squirrel in “Under the Lake,” it wasn’t just a throwaway joke. Whithouse says observant viewers will be able to spot the tiny creation just before the Doctor begins to play the show’s theme on the guitar. “He picks up the guitar and you catch it very briefly. He turns on the amp and on the amp is the clockwork squirrel.”

Sunglass Hut: Sonic Shades…Just Because
Whithouse thinks an advantage of the Doctor having a pair of sonic sunglasses, as opposed to a screwdriver, is that “They look cool.”