If you love television and you're attending or plan to follow San Diego Comic-Con, here's everything you need to know for Saturday and Sunday's panels.

Are You Ready, Kids?: Nickelodeon’s Spongebob Squarepants
The famous residents of Bikini Bottom are ready to talk about their nautical show at this animated panel. Join the cast and the show’s creative director for a live performance, a Q&A, fan trivia and a sneak peak at a new episode.

Avatar the Last Airbender: Legend and Legacy
This special panel celebrates the undying fan love and loyalty to the beloved series. Reminisce the story of Aang and Korra with the cast of the show and enter for your chance to win a cosplay contest.

The Last Man on Earth
The cast of the comedy discusses season one and gives fans a sense of what to expect for the upcoming season two.

Land of the Lost Series Reunion
Take a trip down memory lane with the cast and crew of the iconic show. There will even be a screening of never-before-seen footage, which will be featured in the show’s upcoming documentary. Once Upon A Time
Join the all-star cast and crew of the fairytale show as they discuss the new roles and adventures of the show’s classic storybook characters.

Into the Badlands
This panel will bring the exciting world of authentic martial arts to the small screen and tease the upcoming series premiere of AMC's drama. 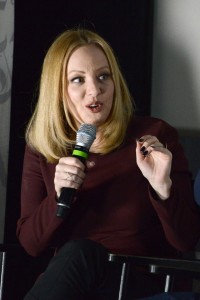 TV Guide Magazine: Fan Favorites
Join this esteemed panel of actors from the biggest shows on television this season as they take fans behind the scenes.

Childhood’s End
The cast and crew of the upcoming Syfy miniseries will discuss season one and explain how they were able to bring Arthur C. Clarke’s famous novel to the small screen.

Blindspot Pilot Screening and Q&A
Blindspot makes it's Comic-Con debut with an exclusive screening of the pilot episode followed by an exciting panel with the NBC drama's cast and executive producers.

Inside the Writers’ Room: The Pilot: Part One
Experienced and acclaimed television writers and creators share their first-hand experiences of making and selling a television pilot.

Monster High Panel
Fans of the scary animated series get the chance to meet new characters and dolls and see never-before-seen scenes from the upcoming season.

The Simpsons
Join the iconic show’s creator, executive producers, directors and main voice actress Nancy Cartwright for a panel filled with sneak peeks and inside scoops, including a look at Treehouse of Horror XXVI.

12 Monkeys
Uncover the mysteries of Syfy's critically acclaimed first season and learn what twists are in store for the upcoming season 2.

Colony: USA Network Series Screening
Watch an exclusive screening of USA’s newest drama Colony, followed by a Q&A with its cast and crew.

Sid & Marty Krofft: A Look at the Future, Present, and the Past
Listen as brothers Sid & Marty Krofft reveal their exciting new family television projects in this exclusive Comic-Con event.

Seth MacFarlane Animation Block
Pick the brain behind one of television’s biggest comedy geniuses in a panel featuring sneak peeks of his hit shows Family Guy and American Dad! alongside his famous cast. MacFarlane will also give fans an exclusive look into his upcoming project Bordertown.

Babble on with the Cast of Babylon 5
Reminisce with the cast of the show as they talk about their time on the show and celebrate 20 years of Sci-fi television.

Children of Tendu Live
Writers and producers of some of television’s most famous shows will answer any questions regarding how shows are made and come to be.

The Awesomes: A Hulu Original
The all-star cast and creators of the smash Hulu series will discuss its upcoming season, answer questions and screen never-before-seen footage.

The Return of Invader Zim
Join the creator and creative team behind the alien animated series as they discuss the highly anticipated revival of the hit show.

Wander Over Yonder: The Galactic Domination Tour
The creator and stars of Disney XD’s hit show will discuss the upcoming season and show fans some exclusive clips in this exciting Q&A panel. Grimm Season 5
Alright, Grimmsters, the cast and crew of the hit series return to Comic-Con for a panel filled with spoilers, exclusive clips and more from its upcoming fifth season premiere.

Anything Goes with John Barrowman
Discover the many talents of entertainer John Barrowman (Arrow, Torchwood, Doctor Who) in this intimate Q&A panel.

Lost Podcast and Beyond
Join famous podcast hosts Jay Glatfelter and Jack Glatfelter to talk all things television as they make they their Comic-Con return in this Lost-themed panel.

The Muppets Show Coming on ABC
The iconic characters of the Muppets come to welcome their new show to ABC. Join the show’s creators and producers as they discuss the highly anticipated first season and bring your favorite characters to life.

Outcast TV Series: A First Look with Robert Kirkman
Get an exclusive sneak peak at the upcoming comic adaption in this exciting panel composed of the show’s producer and cast members.

Entertainment Weekly: Women Who Kick Ass
Be part of this history-making discussion as television’s biggest actress talk about their fierce and powerful roles as badass women in popular television.

Starz: Outlander
Meet the stars and other notable people responsible for making this series a hit as they discuss the upcoming season and preview what’s to come.

The Expanse
Check out a full screening of the Syfy pilot before it airs in December with the cast and creative minds behind the futuristic drama.

Hannibal: Savor the Hunt
Sit down with the producers, creators and cast members of the brilliantly terrifying show as they discuss what surprises are in store for the new season.

Person of Interest Special Video Presentation and Q&A
Enjoy a special video presentation followed by a Q&A with the producers and stars of the hit series as they discuss its upcoming season.

Salem
Join the cast and producers of the supernatural show as they look back on footage from last season.

Z Nation
Go behind the scenes with the cast and producers of the zombie show and get a sneak peak of what to expect in season two.

Containment Pilot Screening and Q&A
Get an exclusive first look at this mysterious new series and enjoy a screening of its pilot, followed by a Q&A with the stars and producers.

Inside the Writers’ Room: The Series: Part Two
This panel offers fans the inside scoop of their favorite television shows from the brilliant minds who write them.

An Hour With Adam Savage
Take an hour to ask the Mythbusters star anything, anything at all.

Warner Bros. Television and DC Entertainment Screening Block
Starting off strong with a Supergirl pilot screening, this massive panel features chunks of time for each of your favorite shows including: Supergirl, Arrow, The Flash, Gotham, the highly-anticipated Legends of Tomorrow, and the upcoming CW Seed animated series Vixen.

Panelists: Stars and producers from the above shows

Moderator: Damian Holbrook* will be moderating the Supergirl portion.

The Last Day of Summer: TV Guide Magazine's Farewell to Phineas and Ferb Supernatural Special Video Presentation and Q&A
The cast and executive producer of The CW’s longest-running show will answer your questions about the upcoming eleventh season of Supernatural. The panel will present highlights from past seasons and special features.

LEGO Ninjago
Ninjago returns to Comic Con to discuss their television show and toy line up. The panel will have sneak peeks and host a Q&A session.

Official Sailor Moon Panel
Viz Media will be sharing the production process of releasing all 200 episodes of the original Sailor Moon anime on Blu Ray for the first time. Also find out more about the new anime series Sailor Moon Crystal.

Heroes Reborn: Exclusive Extended Trailer and Q&A with Tim Kring and the Cast
Heroes returns to Comic Con! Join Tim Kring, new, and old cast members as they discuss the 13-episode event. The panel will present an extended trailer of the anticipated trailer and the panelists will answer your burning questions about the show.

FX TV Block Featuring Sex&Drugs&Rock&Roll, The Strain, and Sneak Peek of The Bastard Executioner
End your con with three of FX’s biggest and most anticipated shows. Join the cast and producers of Sex&Drugs&Rock&Roll, The Strain, and The Bastard Executioner to find out what is coming up for your favorite or soon to be favorite FX shows.