On Discovery Channel’s Alaskan Bush People episode “Bear With Us” (Jan. 11), the Browns decide they need to protect the newest member of the family from the excessive number of bears now looking for food on the island. Meanwhile, Matt is in a race for his life as he tries to return home through obstacles of life and death.

Matt manages to stave off death another day as his journey of self-discovery continues. He has yet to shoot a deer to bring meat to his family that just bought a cow. At least there’s always chicken … of the woods. Laetiporus sulphureus is a kind of mushroom that grows on trees, and, yes, it tastes like chicken when cooked. Alert the good people at Buffalo Wild Wings. Matt knocks a bunch of ‘shrooms off a tree and eats them raw, which he describes as having a bitter taste, quite similar to the awful taste in my mouth that began about the same time as this show did.

While Matt feasts on the fungi in his self-imposed exile, the Browns are back in Brownton Abbey slowly realizing what an incredibly stupid and unnecessary inconvenience this cow, Sabrina, is to the entire family. “No doubt Sabrina is putting off quite a bit of smell,” says Bear. Between the smell and the mooing, Sabrina is advertising herself as a Happy Meal for bears. As such, the Browns are guarding Sabrina around the clock. Good. When you have a pet, you have a responsibility.

Matt says, “Not returning with a deer is a total sign of failure.” So is this: 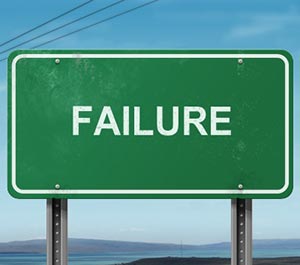 Matt goes fishing for food, casting his line in very shallow water. Matt appears to be holding the rod and reel upside-down, but I’ve seen fishermen do all sorts of weird stuff. Matt finally hooks a salmon, reels it in, stabs it—where’s fish-punchin’ Bear when you need him?—and cooks it up over a fire. It’s a little raw, but you can’t spell “salmonella” without the “salmon.”

Brownton Abbey is once again home to chickens. Real ones, not the mushroom kind. Bear thinks some of his family members may be getting too domesticated in their big, fancy house. Bear always keeps it EXXXXTREME and lives in a tree! And not just any breakfast can satisfy Bear’s EXXXXTREME appetite. Bear demands EXXXXTREME Scrambled Eggs! I don’t know why Bear didn’t go for the obvious pun and say “EGGGGSTREME!” But the only thing EGGGGSTREME in these scrambled eggs are bits of eggshell and a pine needle. Alert the good people at Denny’s.

I only find Matt interesting when he’s failing at something, so this next scene was very disappointing. Matt finally gets a shot at a deer, and though it’s customary to put your finger on the trigger when discharging a firearm, Matt gets his quarry. 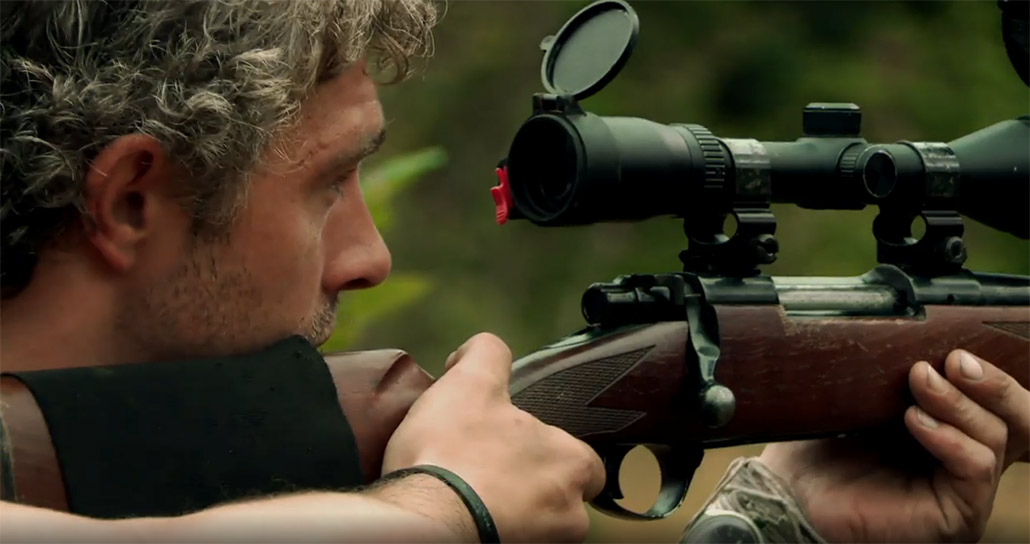 We should say that one of the Skaflestads probably got Matt’s quarry, since it’s pretty well known that the Browns don’t do any actual hunting on the show. That’s why every hunt scene is edited to show you nothing at all and then … Hey, look! Someone left this deer carcass here! Matt starts slicing and dicing the deer up and removing the innards. 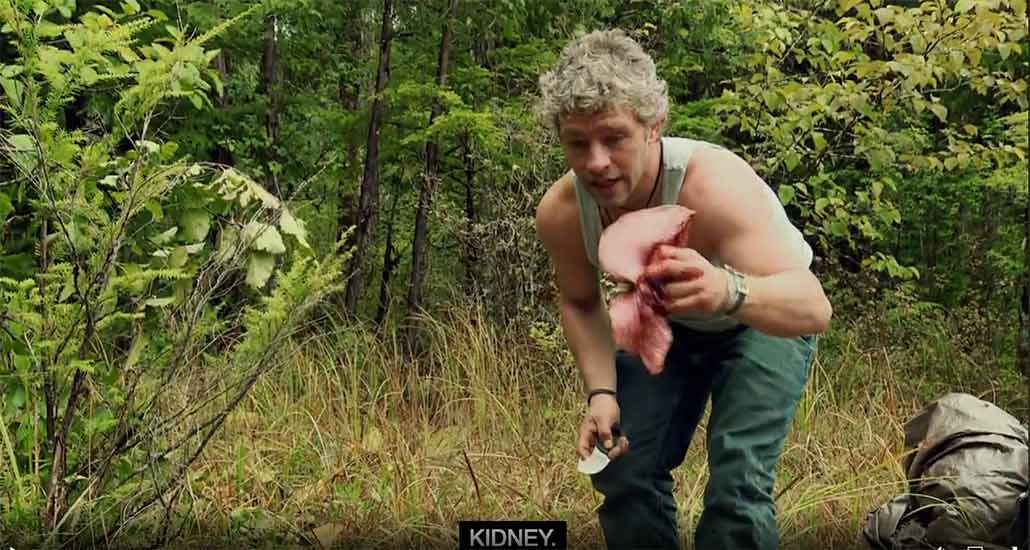 Um, no. Kidneys, even deer ones, don’t look like that. And a guy who’s field-dressing a deer doesn’t look all clean and not bloody.

Bear’s EXXXXTREME Scrambled Eggs have his creative juices flowing. And when the inspiration to paint the interior of your treehouse with mud and berries strikes, you must go with it. Bear wants to paint his walls red to match his Michael Jackson leather jackets. Bear believes red to be the most EXXXXTREME color, since it’s the color of blood and danger. [DIGRESSION! While red may be the most EXXXXTREME if you’re talking about the size of wavelengths in the visible spectrum, I think white is the most EXXXXTREME color, since it’s ALL of the colors of the visible spectrum at once. I think the full brunt of ROY G. BIV coming at you is much more EXXXXTREME than red alone. Any Bush physicists want to weigh in?] Bear collects red berries and red mud, mixes them in a bucket, and then just punches and stomps on the mixture until it’s smooth. He then slathers it all over the walls in his house, and Rainy comes up with a Bush paint roller idea, just because Rainy needs something to do in this episode.

Birdy and Gabe are washing the cow with her stinky cow breath and her smelly cow turds. Attracted to all the yummy bovine scents is a bear, who roams nearby in a rare instance in which the Browns are actually in the same frame as a bear. The bear just hangs out, keeping its distance, trying to get a nice look at that smelly beef. Birdy tries to keep Sabrina calm while Gabe, Bam and Betsy DeVos shoo the bear away.

Now, what was the first thing that popped into your head when you heard the Browns were getting a cow? First was probably “Stupid!” Second was probably “But won’t bears want to eat the cow?” But this very simple, obvious thought didn’t enter the mind of 34-Freakin’-Years-in-the-Bush Billy Brown, who says says this bear was a “wake-up call.” 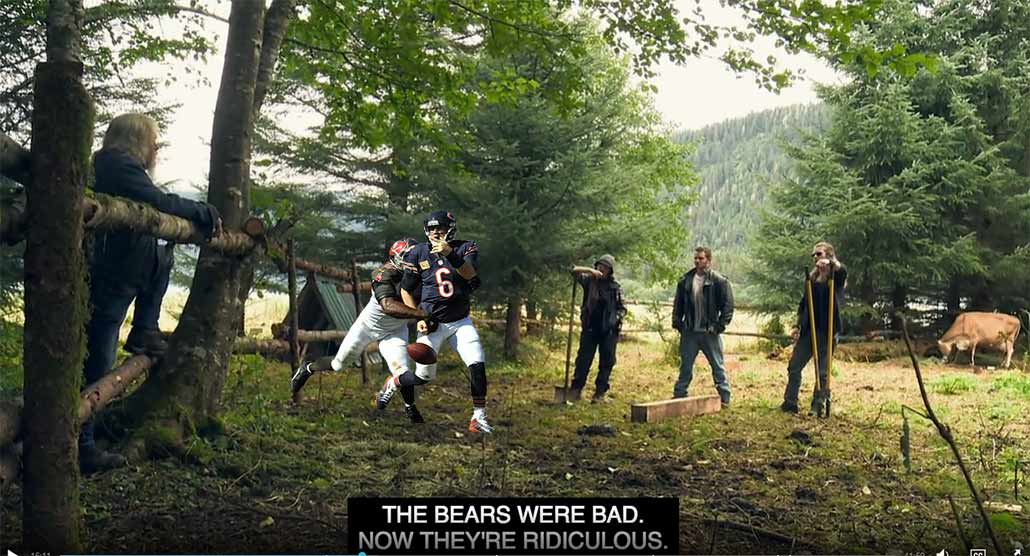 [DIGRESSION! Longtime readers of these recaps know that I refer to Chichagof Island as Chicago Bears Island, because it is both swarming with bears and Chichagof is just too damned hard to spell. But did you know that, despite my being a lifelong resident of Wisconsin, that I grew up as a Chicago Bears fan? Yes, the Bears are my favorite NFL team, and I hate them so very much. So while I tried to avert my eyes from the Bears’ worst season in recent memory, the Green Bay Packers are once again one victory away from the Super Bowl. I am in Football Hell, and I deserve it.]

Billy wants the boys to build a bear-proof barn for Sabrina, and he tells them to “knock it out as quick as you can.” Then he goes off to eat butter and do gross things with his wife. Billy’s become so lazy, he doesn’t even try to fake an illness to get out of working anymore.

Sabrina’s not the only thing the bears are interested in. Matt is lugging the deer carcass through the woods, and there’s a hungry bear hot on his trail. Matt decides to wrap the deer up in a tarp to mask the deer’s smell and make it easier to drag along the ground. But wrapping the deer up might also hasten decomposition of the meat, so Matt could have a side of E. coli to go with his salmonella. I’m just hoping the deer springs back to life, like in Tommy Boy or Kalamazoo, Mich.

Blah. I thought that we might not see Noah in this episode, but fate is cruel. Ami wants to turn the rich cream from Sabrina into butter, so she enlists Noah—who appears to be sharing living quarters with the chickens—to build a Bush butter churn. 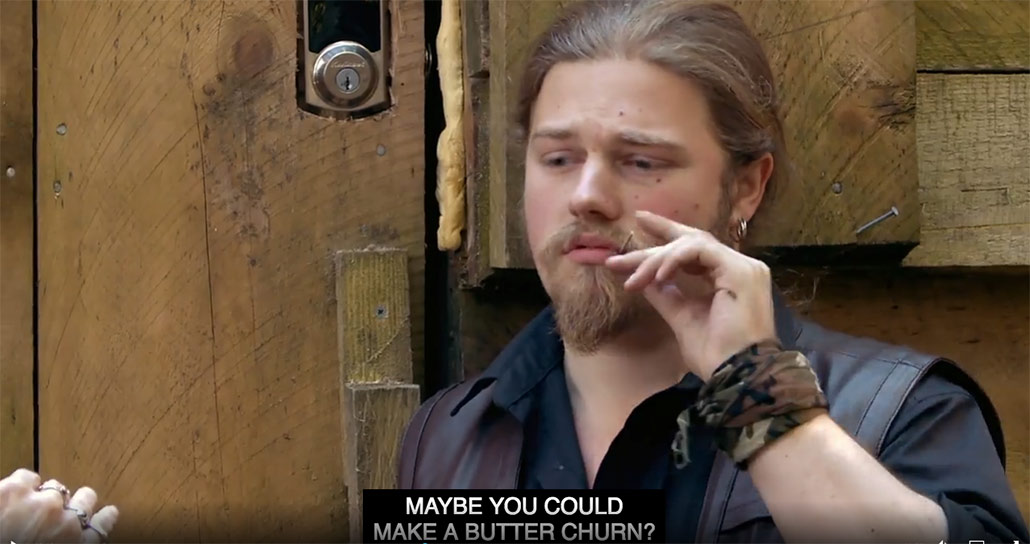 Oh, Noah, you are so badass! You’re like the James Dean of the Bush! Noah says that butter churns are not rocket science, but … 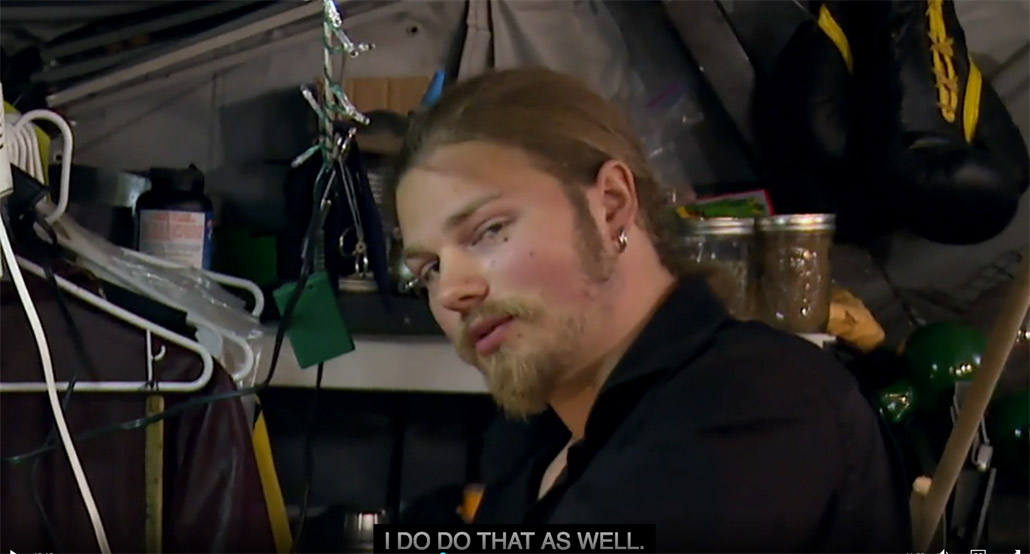 Screw you, Noah. The Bush butter churn is just a bucket with an old porthole for a lid and a crank made out of pipes.

Gabe, Noah and Birdy are supposed to build the bear-proof barn before nightfall, because they don’t want to sit outside for another night of cow-guarding duty. Yeah, good luck with that. Fortunately the Browns have a bunch of unused milled lumber and some corrugated tin sitting around, so they get right to work. Somehow, Gabe ends up as foreman on this job, and he’s incompetent. He doesn’t really have a plan, and he’s not into the whole measuring thing. He’s just going to slap a bunch of stuff together as hastily and half-assed as possible. Bam, who thought the cow was ridiculous from the start, once again has to step in and fix someone else’s mess.

Inside the house, Ami and Billy are enjoying some rare alone time churning butter.

This scene is creepy, and I don’t know how I survived watching it. Some of the innuendo made me laugh, but then the images it conjured up made my stomach churn. 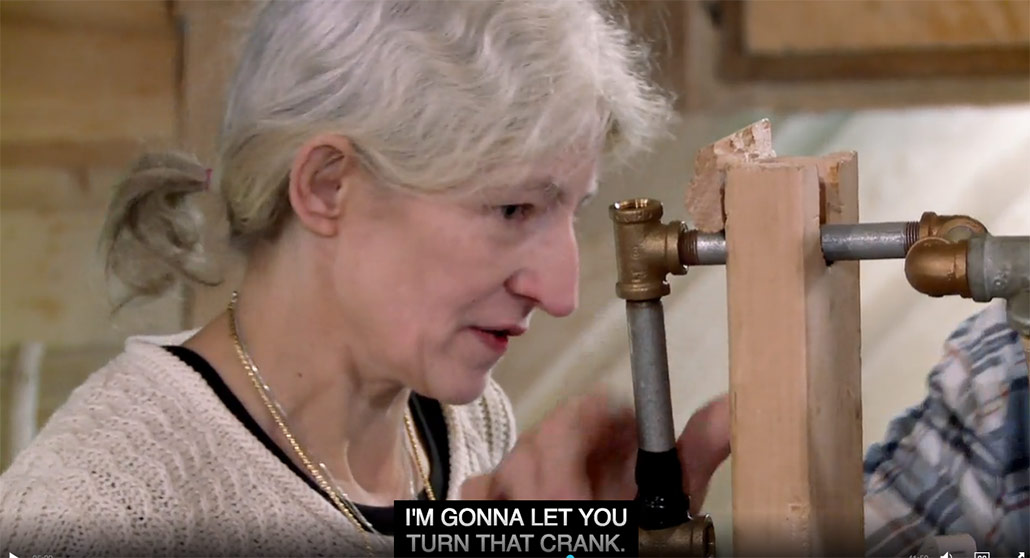 Then Billy and Ami engage in some more kissing, heavy petting and, well, you know… Here we have an exclusive still photo from Lost Footage of Ami and Billy in the act of passionate lovemaking: 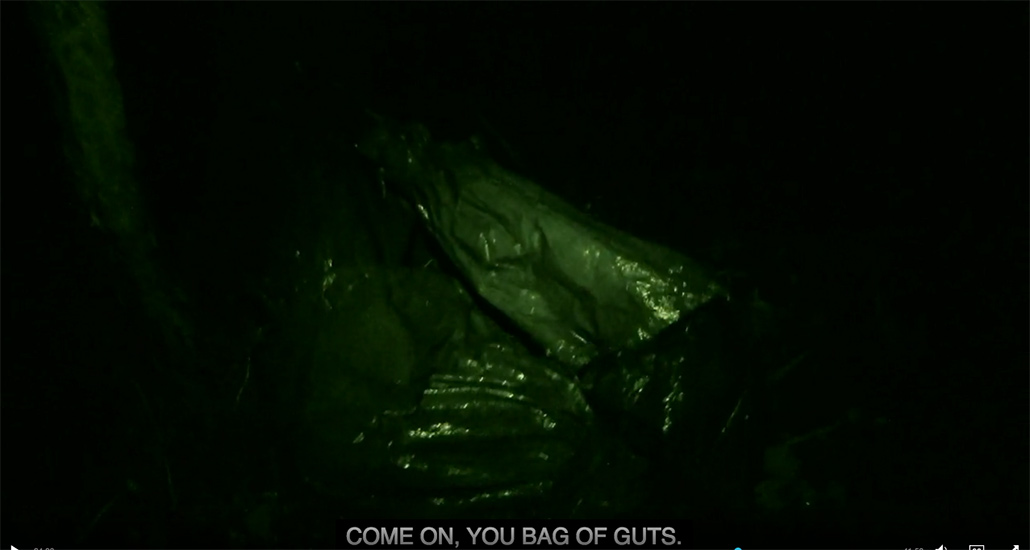 Outside, the barn raising isn’t going so well. There will be no shelter for Sabrina tonight. The failure to live up to his father’s ridiculous expectations weighs heavily on Gabe, who volunteers for the night watch so he can sit alone and sulk. Birdy comes to visit with gifts of bread, freshly churned butter and moral support. 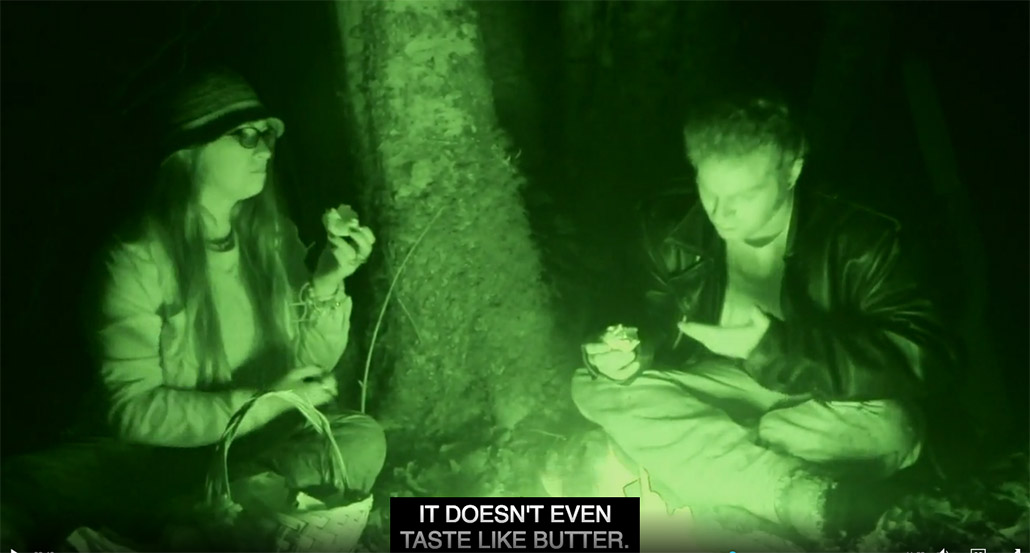 [DIGRESSION! The history of butter-substitute spread products is long and humorous. We all know of I Can’t Believe It’s Not Butter, but the various store-brand knock-offs are much funnier. Wal-Mart’s version is Wow! I Totally Thought It Was Butter! Kroger has Butter It’s Not, which sounds like something marketed to Yoda. Those of us of a certain age can remember the glory days of Parkay. Ah, what sweet days they were!]

In the interstitial segment, Bear and Rainy play “kick the bucket,” which is literally kicking a bucket and not a euphemism for death.

Anyway, this episode gets wrapped up in a neat little bow. Gabe, Bam and Birdy complete Sabrina’s barn. Matt returns home with the deer. There is much howling and self-congratulating. The Browns celebrate their scripted successes by devouring that whole deer in one sitting. They don’t need to stock up for winter, since they’ll be spending the season in Las Vegas.

Channel Guide Magazine‘s recaps of Alaskan Bush People are now here on TV Insider. But unlike all other changes in life, this one is not too horrible. Channel Guide Magazine and TV Guide Magazine have the same parent company, NTVB Media, and we want to work together to build a single TV news and information website of extraordinary magnitude. All shall be awestruck at the sight of it!

What does it mean for Channel Guide‘s Alaskan Bush People content? Older ABP stuff will stay on channelguidemag.com, and future generations will study it when they explore the history of President Solomon “Bear” Brown’s rise to power. New recaps will now live on TV Insider, and I will continue to write them as poorly as I have done since Season 1, Episode 1. One benefit is that TV Insider has a whole page dedicated to Alaskan Bush People recaps, news, polls, humor and your comments. There will be some adjustments, and you’ll have to log in differently to post comments. Yes, you’ll have to update your bookmarks (start here!) and all that other stuff that is a royal pain in the ass. But I hope to make it worth all the effort.

And if I don’t, please tell [email protected]. 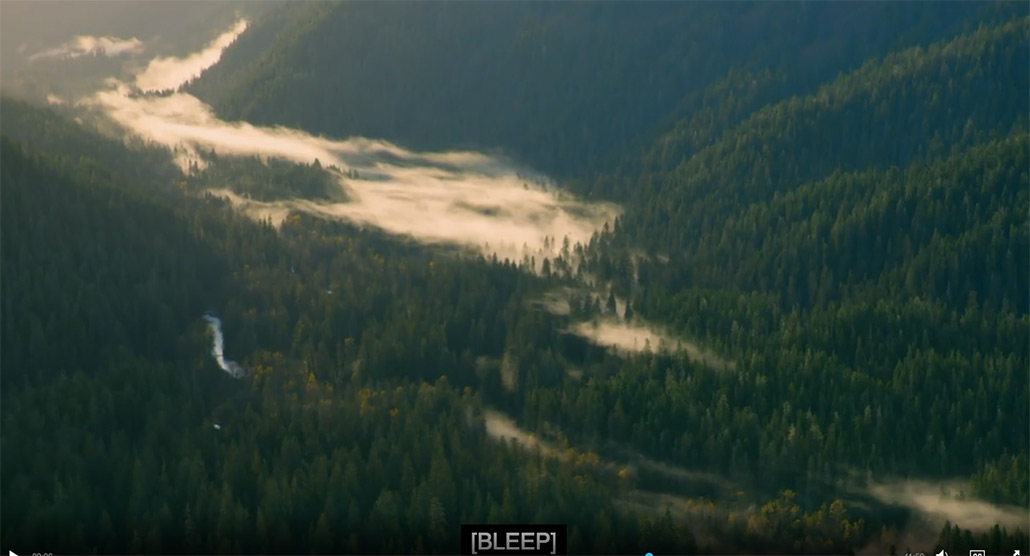