‘Daughter of the Bride’: Will Marcia Gay Harden & Aidan Quinn Be Happy Ever After? (VIDEO)

In the market for a romantic comedy movie night? Daughter of the Bride has you covered as the MarVista and Particular Crow production hits select theaters, digital HD, and On Demand on Friday, February 3.

TV Insider has your exclusive first look at the fun with the full trailer featuring a cast made up of Marcia Gay Harden, Halston Sage, and Aidan Quinn. The movie follows the special relationship between the mother-daughter duo Diane (Harden) and Kate (Sage), who are also best friends. Their dynamic is shaken up though when Diane announces her engagement to a man named Bruce (Quinn) who she’s been secretly dating. The revelation forces Kate to come to terms with letting her mother be happy with someone besides herself at the same time that she’s dealing with her own love life and career.

While Diane falls deeper in love, Kate fears that her close-knit relationship with her mother will be changed forever, and not in a good way. This fear leads Kate to subconsciously try and sabotage the wedding plans, despite plans to officiate the ceremony. As Kate tries to get her mom to take a step back and evaluate the situation before making any rash decisions, she finds herself falling for her handsome neighbor Josh (Andrew Richardson). Can she make things work with the right guy at the wrong time? 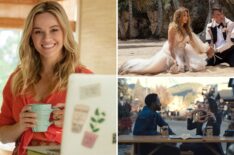 The Rom-Com Is Back! 10 Movies & Series We Can't Wait to See

Only time will tell, but if this trailer is any indication, the laughs will be abundant. We also have a peek at the key art teasing Bruce and his role as a metaphorical wedge between Diane and Kate. Daughter of the Bride is directed by Annette Haywood-Carter and written by Karen Bloch Morse. Don’t miss the fun, check out the trailer and key art above, and don’t miss Daughter of the Bride when it arrives.

Daughter of the Bride where to stream

Daughter of the Bride