Imagine Law & Order told from the defendant’s point of view, laying out like a jigsaw puzzle the emotionally fraught circumstances that got them in this mess. Adapted from a British series by veteran producer H0ward Gordon (24, Homeland), Fox‘s Accused (premiering January 22) takes that riskiest of formats for commercial TV — the weekly stand-alone anthology — and grafts it onto the legal drama with morally challenging parables that take us out of our comfort zone.

Not exactly a recipe for slam-dunk success, but kudos to Fox for even attempting something this ambitious and, more often than not, riveting, at times even heartbreaking. Take the opening installment: “Scott’s Story,” a haunting what-if melodrama starring Michael Chiklis as a respected neurosurgeon who fears his emotionally withdrawn, bullied teenage son (Oakes Fegley) has the makings of a mass murderer. His wife (played by Jill Hennessy) coddles the boy and is in denial, urging Scott to reach out to the boy. What happens next is not what you might expect.

But why is Scott even on trial? The major narrative twist in Accused is not so much the verdict in most cases, but in the way the story is told, dropping you into the situation and then reversing time to reveal the complex dynamics and hot-button social issues that have trapped these characters in a legal nightmare. Not until later do you typically even know what the charges are. The result can be manipulative, with rather abrupt and occasionally contrived endings, but with smart casting and a compassionate approach, Accused acquits itself more often than not with dramatic integrity. When the series moves into its regular Tuesday time period on January 24, that’s especially true with an episode directed by Marlee Matlin, who clearly identifies with the protagonist: Ava (Stephanie Nogueras), a deaf surrogate who gives birth to a deaf child (pure coincidence) and panics when she realizes the hearing parents (The Blacklist‘s Megan Boone and Warehouse 13‘s Aaron Ashmore) plan to implant a cochlear device into the infant. Ava’s dilemma is in doing what she feels is the right thing in the absolutely wrong way, and Matlin’s stylistic choices involving subtitles and silence help drive the point home. 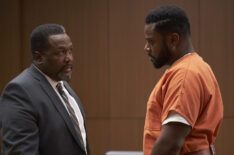 The 'Accused' Cross the Line Between Innocence & Guilt in New Trailer

I was even more impressed by “Robyn’s Story,” directed by Pose Emmy winner Billy Porter, starring J. Harrison Ghee (currently knocking them dead in Broadway’s Some Like It Hot) in the cautionary tale of a Boston teacher who moonlights as a drag queen and faces ruin after getting involved with a closeted man who’s got his own secrets. Though marred somewhat by a pat ending, this hour is compelling and compassionate — an asset that also distinguishes “Billy’s Story,” starring Keith Carradine as an aging rock star who (like Scott in the opening story) is in despair over his son, a drug addict on a downward spiral.

By their nature, anthologies are uneven, and this series doesn’t entirely escape that curse; the weakest of the five episodes available for preview features The Resident‘s Malcolm-Jamal Warner as a conflicted dad seeking justice for his sexually assaulted 10-year-0ld daughter, a revenge tale that takes a few too many unconvincing twists. But in its focus on the person being tried, not in the trial itself, Accused asks to be judged on its emotional impact, which more often than not is considerable.