Hallmark regular Lacey Chabert, who has starred in over 35 projects on the network, has hit back at comments made by Candace Cameron Bure, who recently left Hallmark for rival network Great American Family (GAF).

In an interview with the Wall Street Journal in November, Bure explained her reason for leaving Hallmark was due to “the change of leadership,” stating it became “a completely different network than when I started.”

However, Chabert has an entirely different view from the former Full House star, telling Vulture, “I’m able to be more of who I am here [at Hallmark] than possibly anywhere else I’ve worked.”

The Mean Girls actress said that she has welcomed the changes, explaining, “Any shift I’ve felt has been embracing our creative ideas. And it’s my responsibility to the audience who continue to tune into my movies that I give the best I have to offer. That’s always my mission.”

“I’ll never abandon what Hallmark means for me, which is that everything is centered around the heart,” she added. “I don’t think there are any plans for that to change anytime soon.”

Bure’s comments to the Wall Street Journal sparked controversy last month when she said that GAF would “keep traditional marriage at the core” of its programming, seemingly in reference to Hallmark producing its first Christmas film with a same-sex couple as the main characters. 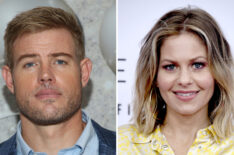 Trevor Donovan on Great American Family Controversy: 'People Should Be and Believe What They Want'

Chabert didn’t address Bure directly, nor did she speak on any of her former Hallmark co-stars who have jumped ship to GAF. “You know what, I wish everybody the best,” she said. “I really can’t comment on it further other than I care about everybody involved.”

And as for whether the GAF had tried to tempt Chabert over, all she had to say on the matter was, “I’m with Hallmark, and I work for them. I’m so sorry, but I’ll just have to leave it at that.”