Now here’s a bunch of hocus-pocus we can get into!

On the heels of the fabulous adaptation of Interview With the Vampire, AMC and its streaming branch have conjured up an equally addictive take on the late author’s novels about a clan of enchantresses in Anne Rice’s Mayfair Witches, premiering Sunday, January 8 at 9/8c.

“It’s not quite as brutal as Interview,” explains Mark Johnson, the executive producer overseeing AMC’s burgeoning Anne Rice Immortal Universe. “It’s about family, who they are and how do you fit in?”

Alexandra Daddario is impossible to look away from as Rowan Fielding, a San Francisco neurosurgeon who begins a search for her birth parents after the death of her adoptive mother (Erica Gimpel). Led to New Orleans — and terrified by the onset of some grisly new powers — Rowan soon finds she’s tied to not just an ailing woman with the same last name (Midnight Mass’ Annabeth Gish) but an entire blood-soaked line of supernaturally gifted Mayfairs. 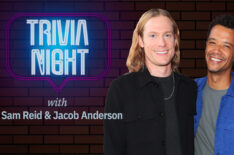 While Season 1 is based in part on the first entry in Rice’s series, The Witching Hour, readers should expect surprises.

“We’re not strictly adhering to one book per season,” says Johnson, adding that it will take multiple seasons to tell the tale. “There’s a lot that we can still come back to.” Guess there’s no rest for the wicca’d.

The witching hour begins across all AMC platforms on Sunday, January 8. Starting at 9/8c, the series premiere of Mayfair Witches will be simulcast on AMC, AMC+ (the network’s streamer), BBC America, IFC, SundanceTV, and WE tv. The premiere will come to Shudder, Sundance Now, Acorn, and ALLBLK on January 12.

A documentary diving into the lore that inspired the Rice novels and series, All of Them Witches, preceded the series premiere on December 21. The doc initially debuted on AMC+, then on AMC on January 2. Viewers can check it out on AMC+ ahead of the Mayfair Witches series premiere on January 8.