Roman’s daughter, Judi Levin, told Deadline that he died of a heart attack in Boynton Beach, FL, on Saturday, November 26. The comic is also survived by his wife, Ethel.

Born Fred Kirschenbaum, Roman grew up in New York City and started emceeing at the Catskills’ Crystal Spring Hotel, a resort his uncle and grandfather owned, when he was 15. As a comedian, Roman made a name for himself not only in the Catskills but also in Las Vegas, New York, and other big cities.

On screen, Roman guest-starred in a 2004 episode of Law & Order: Criminal Intent and recurred Herb in 18 episodes of the 2014 Prime Video comedy Red Oaks.

He acted in the films Sweet Lorraine, Finding North, Christ in the City, Bittersweet Place, and The Comedian, a Robert De Niro film in which Roman played himself.

Roman was also a dean of the New York Friars Club and participated in the club’s televised roasts of Drew Carey, Rob Reiner, Hugh Hefner, and Chevy Chase. 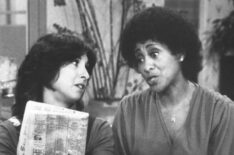 After Roman’s death made headlines, his famous friends and admirers posted their condolences on Twitter. “This dear, sweet man put a smile on your face whether he was on stage or on the phone,” sportscaster Howie Rose tweeted. “An absolute treasure. Condolences to his wife, Ethel. RIP.”

Fellow comic and Feud actress Jackie Hoffman tweeted, “Freddie Roman. Saw you perform at the Brickman Hotel in the Catskills. Met you at the Friars Club. Loved you. You’ll never know how much.”

And Mad About You star Paul Reiser wrote, “A great loss to the world of comedy. My dear friend Freddie Roman has left us. He was such a huge supporter and mentor when I was starting out. A greatcomic, the ultimate pro with the biggest heart. I will miss our phone calls and his big, beauty laugh. RIP, my friend.”