The semifinals for Jeopardy‘s Tournament of Champions have been set as Sam Buttrey secured the final spot on Monday’s (November 8) episode, where he defeated Zach Newkirk and Second Chance winner Jessica Stephens.

While it was a successful night for Buttrey, the episode became something of a nightmare for Stephens, who previously earned her spot in the tournament by winning one of two Second Chance places. The statistical research specialist from Nashville, Tennessee, struggled against her opponents and finished Double Jeopardy! with -$5,800, meaning she was sent home before Final Jeopardy!.

“Jessica, you had to take a lot of swings, and as a result you won’t be joining us for Final Jeopardy!,” said host Ken Jennings. “But we loved having you; congratulations on your Second Chance success.”

Buttrey, the Associate Professor of Operations Research at the Naval Postgraduate School, beat Newkirk in Final Jeopardy! and will now move on to the semi-finals, which will take place over three rounds from Wednesday – Friday. Then, on Thursday, November 10, Buttery will go up against Software Team Lead John Focht and super-champ Matt Amodio. 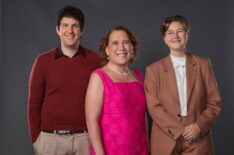 Meanwhile, tonight, Tuesday 8, the tournament will take a break for a special exhibition game between Amodio, Schneider, and Roach, the three winningest champions who received byes into the semi-finals.