Netflix‘s Dead To Me returns for its third and final season on November 17, and it’s not just fans who are looking forward to seeing the show return.

“I started writing this season in June of 2020. We were done shooting in February of 2021. But it’s been a minute since I’ve worked on the show,” series creator Liz Feldman tells TV Insider. “So in some ways, I have to remind myself that people haven’t seen it yet. But in the same way, it’s a thrill that people will get to see it.”

That thrill has been a long time coming: the Season 2 finale aired in 2020 and was followed by numerous delays, including COVID and star Christina Applegate‘s multiple sclerosis diagnosis. Now, fans will finally be able to see the conclusion to the story that Feldman began telling in 2019 — the story of two seemingly different women coming together and bonding thanks to secrets and their own shared traumas.

“It was only 10 episodes of a half-hour show. In a normal universe, it wouldn’t take two and a half years to get back on the screen,” she says. “But obviously, we were dealing with what everybody was dealing with and other things outside of that. And, you know, the truth is that I feel so lucky to get to work in this business in any capacity, and then to get to tell a story that means so much to me, and that is so close to my heart, it already feels like such a win. And so it really, it really feels kind of triumphant that we were able to get this season done, and get it in front of your eyes.”

At the end of the show’s second season, Applegate’s Jen Harding and Linda Cardellini‘s Judy Hale seemed to be back at the moment that started it all: a hit-and-run. Only this time, instead of Judy and her fiancé Steve Wood (James Marsden) hitting Jen’s late husband Ted, it was the BFFs who were on the receiving end of the accident — the culprit of whom was none other than Steve’s twin brother Ben (also James Marsden). It was the cherry on top of another cliffhanger reveal: that despite Judy and Jen’s best efforts to hide Steve’s body in the Angeles Forest following Jen’s accidental murder at the end of Season 1, their secret had been discovered. 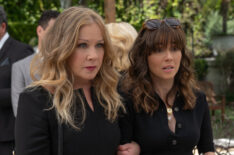 Christina Applegate Talks Returning to 'Dead to Me' After MS Diagnosis

A recently released trailer for Season 3 confirmed the fallout of that discovery, with the police (and FBI) hot on Jen and Judy’s trail as they once again attempt to work together to avoid being caught. But as for how the show will officially end? Well, as Dead To Me has shown, anything is fair game. And while Feldman says she can’t wait to see fans’ reaction to the final season, she also admits she’s “slightly terrified” — though she maintains that however viewers feel about the ending of Judy and Jen’s story, it stays true to the DNA of the series.

“I really just wanted to honor the place from which the show was born, which was my own grief and my own grappling with some really major losses in my life,” she says. “Honestly, my biggest hope is that [audiences] do feel. That has been one of my aims this whole time, I think maybe because I come from such a comedy with a capital C background. I was always itching for those shows, and those narratives that I’ve worked on in the past, to make you feel something more deeply than just a fleeting laugh.”

It’s safe to say that over two seasons, the show has already done just that — and much more. It’s changed the narrative on what qualities are considered “likable” for female characters and its production standards have championed more women in front of and behind the camera. For Feldman, the legacy that she’s taking away from the show is just as poignant as the things it has given its audience. “I’m most proud of the relationships that I was able to form during the making of this show, both in the writers’ room and in production, and, you know, specifically with Christina, and Linda,” she says. “I think that it’s really easy to get caught up in wanting to be successful. And you know, getting all of your self-worth from how many people watch your show, how people review it. For me, those things are awesome, but they’re temporary. And they kind of come and go and they don’t really stay with you in terms of a lasting feeling. But those relationships, those friendships that I was able to form and that I watched other people form along the way, that’s what really matters. That’s what matters in the end, you know? It’s the people that stay with you. And that’s, I think, what I’m most proud of.”