Logano (2018) and Elliott (2020) are racing for their second career Cup Series titles, while Chastain and Bell are making their first appearance in the Championship 4. 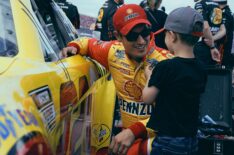 Chastain pulled off this gutsy move on the last lap at Martinsville to beat Denny Hamlin and secure his spot in the final four: