Looking for a sweet teen binge this summer? Paramount+ is serving up the perfect remedy with its new movie Honor Society.

Following the titular Honor (Angourie Rice, Mare of Easttown), she’s a girl on a mission as her senior year approaches its end. Eager to make it into Harvard, she’s assuming she’ll be guidance counselor Mr. Calvin’s (Christopher Mintz-Plasse) first pick for a recommendation, but she soon learns that’s not the case.

Willing to do anything it takes to earn the coveted rec, Honor comes up with a plan to take down her top three student competitors, one of which happens to be outcast, Michael (Stranger Things‘ Gaten Matarazzo). The only problem? She begins to fall for the competition. Below, Matarazzo fills us in on his character and what to expect. 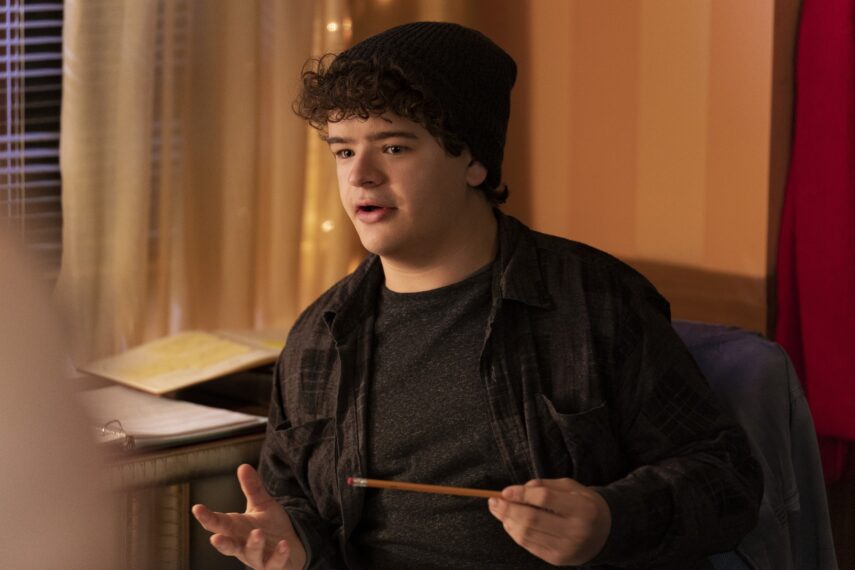 Honor Society may be considered a teen rom-com, but it’s a little different from its predecessors. How do you think the movie diverts from expectations when it comes to the genre?

Gaten Matarazzo: I think in a fun way, it’s just honest about the way that teenagers think and act around each other, which is really interesting and really rare. Of course, there’s a lot of absurdity. It’s a teen comedy, it’s a teen rom-com. So it’s going to break the laws of social physics in some aspects. But for the most part, it felt like I was playing real people, that I was acting around real people, which is really fun.

What will surprise fans the most about your character Michael?

When it comes to a lot of characters that are portrayed as nerdy, back of the class, don’t really talk, scared of girls, they’re usually portrayed as they’ll do anything to be with the girl that talks to them and drop everything around them. And I think what’s interesting about Michael is that he doesn’t like them either. There’s this notion that the minute that they’re allowed to be in these groups or anybody in these pockets or crowds is nice to them that they are all of a sudden going to be open arms and excited to be around these people. Why in the hell would they even like you when they’ve been treated like crap by you for so long? And I think it’s real and it’s honest. I always hated these movies where these guarded characters were all of a sudden just switching [sides]. And it was really interesting to play a character where he was upfront and open about the fact that he doesn’t like you either.

Considering the movie’s rom-com theme, is that a genre you’d like to explore more, or is there another genre on your acting wish list?

I don’t really focus on genres. If I like a character and I like the script, then I’ll go for it. I would love to expand when it comes to genres. I’d love to play new characters. I like a challenge. I like something that’s going to be different from what I’ve done before. So I’m hoping that anything that comes along next is quite different from Michael and Dustin.

Dark times might be ahead following the loss of Eddie.

You have a chance to show off your musical skills in this movie. You even play piano, was that scripted or something you pitched?

I don’t play. That was scripted from the get-go. The singing and the piano playing. I’ve been what I like to think of as a singer my whole life. But playing the piano is not something… It’s something I’ve tried five different times and never followed through on. So I know chord progressions. I know scales. I know how to read music if you give me 10 minutes per note. And that’s pretty much it. And so I spent hours working on that one little bit of Alicia Keys.

I would’ve never known. I honestly thought you could play the piano.

I got there and I couldn’t even play, so I was miming the whole time. But it worked, we got it.

Honor Society where to stream