[Warning: The below contains MAJOR spoilers for Season 6, Episode 18, the series finale of This Is Us, “Us.”]

The series finale of This Is Us has arrived, delivering creator Dan Fogelman‘s long-discussed closing chapter for the Pearson family.

In, “Us,” there are no major twists or turns, no last-minute revelations. There is, however, plenty of reveling in the idea of “here and now” as the installment focuses on a lazy Saturday for Rebecca (Mandy Moore), Jack (Milo Ventimiglia), and the Big 3 — Kate (Mackenzie Hancsicsak), Kevin (Parker Bates), and Randall (Lonnie Chavis) — along with the sad occasion of Rebecca’s funeral in the future.

It’s been known for a while that Fogelman had in mind the story that would be told in the finale, but that didn’t take the pressure off. “I’ve probably felt the most pressure just in these final two episodes to get it done as close to the way I always intended of getting it done,” Fogelman tells TV Insider during a post-series press conference.

“In terms of the twists and turns and it being a relatively simple episode, I’ve always felt that that was the ending of the show,” Fogleman answers honestly. “Amidst all the talk of twists and turns, and death, and house fires, and appliances that cause house fires, where the show really lived was just with a family and with the stuff that a family was exploring.”

And what the finale did was celebrate the family that went through those experiences. Instead of opting for something big and flashy in the finale, Fogelman chose to go bigger in the penultimate episode which follows Rebecca as she takes a final train ride. “I always felt that the boldest and most confident ending for the show would be pulling out one final magic trick at the end and then one big, obviously emotional, sad ending and death, and then allowing the final episode to be a simple reflection on family and time,” Fogelman shares.

“In some ways, that’s the most challenging stuff,” he adds. The showrunner credits the writing staff with helping him pull off the NBC drama’s signature twists, musing, “when you’ve got a really great, smart group of writers and people who execute them, you just need to think of a good one and then figure a way to execute it.” But just like Rebecca who didn’t want to forget the little moments, highlighting the importance of brief memories, Fogelman acknowledges that landing those are even more difficult than nailing the show’s bigger twists. “You always want to make sure you do those right,” he says, “the most ambitious stuff and the most challenging stuff has always been the simple stuff.”

While it may be challenging, Fogelman adds that it’s “also the most rewarding, and that’s why, for us, even though there aren’t a lot of bells and whistles on the final episode, it’s probably as proud I’ve ever been of an episode of the show.” Concluding much as it had begun, the story ends with the Big 3 and their parents, Jack and Rebecca.

And as the Big 3 ponder their futures, Randall (Sterling K. Brown) shares with Kevin (Justin Hartley) and Kate (Chrissy Metz) that he was recently asked to imagine his family in his mind. When doing so, he admits, “my first picture is of mom, dad, and the two of you.” This rings true to his siblings who offer echoing words of agreement, stating, “same.” It’s a moment that speaks to the core of this series. “We talked about that a lot as writers,” Fogelman says of the exchange. “There was actually an additional line that I didn’t put in, just because I wanted to keep the tenor of the scene right,” he says.

In this cut moment, Fogelman says, “Randall immediately follows up that reflection with saying, ‘Don’t tell Beth I said that,’ and Kevin starts teasing him about this whole, ‘Are you kidding? I’ve been recording this whole thing. This whole conversation was on the record. Didn’t you know that?’ And he starts kind of busting his balls. But I didn’t keep that in.” 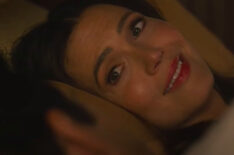 'This Is Us': Milo Ventimiglia, Mandy Moore on Jack & Rebecca's 'Infinite' Love

Plus, Mandy Moore reveals the line that 'broke' her and Ventimiglia reflects on sharing the screen with Dulé Hill.

When it comes to This Is Us, it’s all about family, especially the core Pearsons and that’s part of why Fogelman wanted to explore that dynamic in the final chapter. “I think, for some of us, not all of us, but for some of us, it’s a really honest reflection, [which is your] original family was whatever family you lived your childhood with… there are some of us who always go back to that childhood family in their mind’s eye when they think of who their people are. And I think for Randall, that’s something that was true to him.”

The moment, Fogelman says, is “a reminder of the bond that you hold with siblings and that you hold with your parents. Even though you may become a 40-year-old man living across the country, seeing them once a year, everyone still lives so firmly and so heavily in your mind in good ways, in bad ways. And I thought that reflection encapsulated all of that.”

And with the Big 3’s realization that they’ll always have that special place in each other’s lives, we bid adieu to the TV family who reminded us of our own with its many beautiful and complicated facets.