‘Jeopardy!’: Why Ken Jennings Deserves to Be the Permanent Host

And we’d wager a bet we’re not alone. Since the great Alex Trebek’s passing in 2020 from pancreatic cancer, the 47-year-old former Jeopardy! champion and consulting producer has become one of the most popular replacements to fill the late icon’s spot, thanks to his smarts, magnetism and endearing dad jokes. Jennings’ current tenure — he’s been sharing hosting duties with The Big Bang Theory alum Mayim Bialik since last September — continues to convince us that he is perfect for the job. Even if he wasn’t sold on the idea when he was first asked to guest host in the wake of Trebek’s death.

“I had so much hesitation going in,” the former software engineer admitted in March 2021, “just knowing firsthand what a tough job Alex was doing for decades and how easy he made it look.… You can’t believe how fast it moves when you have to run the game.”

Indeed, he had a bit of a bumpy start, which was off-putting to longtime show fans. “He’s reading the clues too fast,” one person griped on Twitter during his early days. But the Washington native, who holds the record for the highest-earning American game-show winner of all time — thanks in part to his whopping 74-episode run in 2004 — now works that podium like the GOAT he is.

Take his assured performance during Amy Schneider’s recent historic 40-game streak that won her the title of Jeopardy!’s most successful female contestant. Not only was Jennings a perfect blend of wit and wise-assery (while drawing over 9 million viewers each episode), but his postgame banter added a new dynamic we hadn’t seen before: a host who knew what it was like on the other side of the buzzer as the pressure (and the money) piled up.

“There is nothing I like more than watching a great champion play the game at such a high level of excellence,” Jennings raved to Schneider at one point, adding later in January near the end of her run, “The two Jeopardy! champions in the show’s history with the longest streaks are now sharing a stage.” His charm isn’t just reserved for the heavy hitters. Jennings brings a sly glee to the gig, giddily dropping puns and wordplay whenever possible, as he did during a March introduction of Maryland symphony director Ciara Donegan, who was back for her second episode. She “hit all the right notes in yesterday’s game and pulled off a Jeopardy! victory to the tune of $27, 601,” he enthused. “That’s a lot of dough-re-mi.”

He also seems genuinely interested in the contestants, whether it’s asking a North Carolina woman how her family wound up on the local news during the World Series or being presented with a personalized poem by a verse-loving player. “A double limerick…and they’re both clean, so we don’t have to cut them out,” he quipped. “Thank you!”

That’s not to say Bialik isn’t a solid host too. One of the originals recruited to guest host after Trebek’s death, the Call Me Kat star brought the kind of smarts and sass we adored about Alex. So it wasn’t a shock when she was tapped in August 2021 to oversee Jeopardy!’s primetime specials and spinoffs, with exec producer Mike Richards taking the Monday-to-Friday shift.

The same month she and Richards began their tag-team deal, Richards’ unsavory comments about women on a 2013 podcast caught up with him. He stepped down as host, and Jennings — who by then had joined ABC’s game show The Chase — was pulled back in to replace him on a temporary basis. Together, he and Bialik have righted the ship. 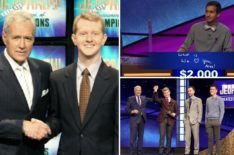 Fans are still awaiting a permanent replacement for Trebek, but TV Guide Magazine is making its choice known by putting Ken Jennings on the latest cover.

But it’s clear fans favor Jennings (who recently departed The Chase, sparking speculation he’s freeing up his schedule for a permanent job on Jeopardy!). Tens of thousands of readers weighed in on a recent poll on TVInsider.com asking who should be awarded full-time hosting honors, and Jennings bested Bialik by 40 percentage points. One respondent praised his “wry humor” and ability to treat “contestants with respect and balance,” while another noted that Trebek himself would be proud of Jennings, with whom he had become friends: “I can see Alex standing beside him and giving him the thumbs-up and a pat on the back.”

We couldn’t agree more. Ever since Jennings first stepped in to host with, as TV Guide Magazine senior critic Matt Roush put it, “humility, dignity—and, even better, enthusiasm,” he has proven to understand what the hit series means to viewers. “The show is very aware of how important it is as an institution,” Jennings said days before Trebek died, while discussing his then-new gig as a consulting producer. “They take that legacy very seriously.… That’s the thing about Jeopardy! It’s kind of in the fabric of our lives. [We] have good memories of watching it; people plan their evenings around it.”

Here’s hoping he’s the one at the podium we can watch night after night.

This is an excerpt from TV Guide Magazine’s latest cover story. For more, pick up the issue, on newsstands Thursday, April 21.