‘Virgin River’ & More Shows You May Have Missed on Netflix

Bridgerton and Squid Game made big impressions in 2021 (and rightfully so), but be sure to catch these series, which may not have grabbed as many headlines but are just as worthy of a watch. Every moment of this Nordic noir thriller is packed with eerie intrigue as detective Naia Thulin (Danica Curcic) and her partner Mark Hess (Mikkel Boe Følsgaard) investigate the grisly murders of women whose killer left behind handmade figurines fashioned from chestnuts. Complicating their case: The fingerprints of another murder victim, seemingly unconnected to these crimes, are found on the little dolls. Season 1 available

Years after a virus wipes out much of mankind, a young human-animal hybrid named Gus (Christian Convery) goes in search of his mother in this magical adaptation of the DC Comics series. The surprising show is filled with dazzling effects, deeply emotional performances and a slew of lovable allies who meet Gus along the way. A hero’s journey has never been so, well, sweet. Season 1 available 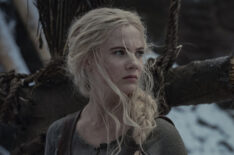 Insanely awkward and unabashedly original, this sketch comedy series from former Saturday Night Live writer and cast member Tim Robinson is a bonkers buffet of surreal skits (child bodybuilders?!) that are as hilarious as they are hard to explain. You just have to sit back and soak in the weirdness to understand why we couldn’t Leave this one off the list. Seasons 1–2 available

The Chestnut Man where to stream

The Defeated where to stream