After making history with its first openly LGBTQ+ lead character in The Christmas House, Hallmark is bringing back our favorite holiday-obsessed family for a spirited sequel. And it’s a total gift!

The Christmas House 2: Deck Those Halls finds the Mitchells — dashing TV actor Mike (Robert Buckley of Chesapeake Shores), equally handsome gay baker brother Brandon (Mean Girls alum Jonathan Bennett), and parents Bill and Phylis (Treat Williams, Sharon Lawrence) — wrapped up in a twist that pits the brothers against each other in a snowy, showy battle of twinkling lights and animatronic reindeer. The original film was based on Buckley’s real-life childhood growing up in a California home that was absolutely drenched in seasonal decor by his parents every year. So much so that they became known as “The Christmas House.”

In the new tale, Mike, having bought the Christmas House from his folks to keep the legacy alive, is back in town on a break from his perfectly titled legal drama, Handsome Justice, to shoot an episode of the Christmas Light Fight-ish reality show Deck Those Halls. But when his competitor drops out of the production, it’s decided that Brandon would make the perfect replacement, seeing as how he’s both adorable and staying in the house next door. Before you can say “sibling rivalry,” the Claus, er, claws are out and the guys are driving their loved ones nuts with their over-the-top plans to take the prize.

Speaking of prizes, TV Insider won the holiday lottery by scoring some time with our forever fan-favorite Buckley, who shared about his childhood memories and how they impacted his current holiday efforts, as well his pride for the very official place The Christmas House now holds in the LGBQT+ community. All allies should be so merry.

You know, Hallmark sequels are not a comment event. I love that this family, this story, was one they knew to go back to.

Robert Buckley: The fact that we got to make the first was so surreal and such an awesome experience. And to now to do a sequel? I still haven’t wrapped my head around it. And I gotta say, truly, I think I like this one better. I feel like we had more fun with this one. Not to disparage the first movie, because I love that one. But we saw what worked well in the original and were like, “If we ever get to do this again, we need more of that.” You and Jonathan didn’t share a ton of screen time together in the first movie.

No, and that was one of those things. Even when we were filming this, I remember thinking, “Oh, even their banter is funnier.” That, and Treat Williams and Sharon Lawrence are so funny. In the first Christmas House, their storyline was largely a heavy one, with them possibly selling the house. There wasn’t a lot of levity to that. When we sat down to break this story, we were like A) let’s get Mike and Brandon head-to-head and B) have some fun with the parents.

Did you write this one, too?

I am an executive producer on this one and was giving notes all along, but unlike the first one, where the writer Erin Rodman and I broke the whole story together, on this one she ran with it entirely. We pitched the idea of what we thought the movie would be to Hallmark and once it got greenlit, she ran with it.

The holiday reality show they compete in is hilarious because it’s so much like what we have actually seen these days. And the fake TV shows that you reference throughout the movie all sound vaguely like they could have been real shows back when the UPN and WB were launching — like Port Authority P.D.

[Laughs] Yeah, and Yesterday’s Tomorrow. When we were writing the first, coming from that world and playing a sort of version of myself, I was like, “We have to skewer this, we have to laugh at it.” And that is where Handsome Justice came from. We thought of the most absurd idea from that genre. 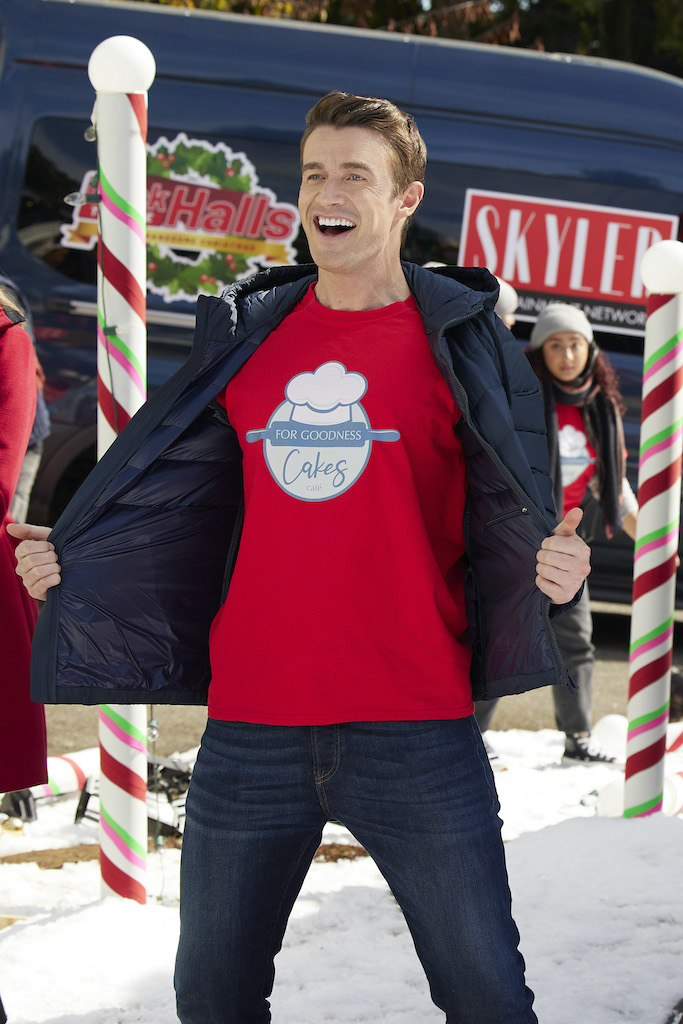 How long have you known Jonathan? You feel like brothers onscreen.

We met in the airport on the way to Vancouver to film the first one. I know! Yeah, we met in LAX and by the time we landed in Canada, we’d become fast friends. We just clicked. And did you see Jonathan’s post? The Smithsonian reached out to us after the original Christmas House came out and said, ‘Hey, we would like some wardrobe and props from the movie because we’d like to include it in our LGBQT+ archives.” So The Christmas House is now in the Smithsonian’s LGBTQ’s Archives. How cool is that?!

The Smithsonian is major!

Yeah! I had set my career goals to like, a Nickelodeon Kids Choice Award. [Laughs]


All of the Hallmark Christmas movies give me holiday envy, but it’s not a sustainable concept with all of the decor. How much fun was it to be on a set like this?

Actually, it is sustainable, because remember, this is based on my actual family and I did live in a house like this. You can live in it, but there’s not a lot of furniture to sit on. [Laughs] Everything was taken out except for the big-screen TV and the couch. So if we had company over, you were either fighting for spots on the couch or on the floor.

Did your parents open it up for tours?

Oh, absolutely. All of the local elementary schools would take field trips to our house. We were known as the Christmas House, which is how all of this got started. And actually, we were entirely an indoor house [of decorations]…we had neighbors down the street who did the outside of their house. But when we sort of Hollywood-ed up the idea for the first one, we decided to do the outside as well. It’s a visual medium.

The day after Halloween, we would rent a U-Haul truck, move all of our furniture into it, drive it to our storage unit, unload that and then load an entire storage unit of Christmas decorations, drive it back to our house and our goal was to be done by Thanksgiving. That is a family of four in slightly less than two months. It was insanity, this thing was nuts, but we loved it. And I would rope friends into it. My mom would be like “tell your buddies to come over and we’ll order some pizza.” So my friends would come over for pizza but also have to fluff garland. How do you celebrate Christmas now, having grown up in that world?

It’s funny because we did this until about up until high school. and then we sort of hit a burnout point and it was just time. So we stopped doing it…we’d still do a tree and like, what would be normal. Just not a Texas-sized decoration show. And now, my wife Jenny and I just got our first home and so I was out shopping for lights and inflatable lawn decorations and it was interesting. It was super-cool because here I am, starting my own family’s tradition, but I also found myself in the shadow of what we used to do. I had a moment after finishing my yard and looking at it, thinking “This is pretty awesome” and simultaneously going, “This is terrible!” [Laughs] I have a tasteful amount of lights, a tree… it’s a perfect beginning. Every year you can do more. And I have to remember, the Christmas House took like 15 years, it got to its apex. But it started with one room. So this is our origin story.

And now, I am thinking this could be a Christmas House trilogy.

You and me, both pal. From your lips to God’s ears!

Are you trying to get producer credit, here?

The actor plays a gay man planning to adopt a child with his husband in this Hallmark first.

There is nothing better than Christmas for kids. And now that Mike is officially with Andi (Ana Ayora), it might be time to expand the family. Not to mention that Brandon and his husband’s kids will be at that perfect age.

Listen, I will be totally honest, when I sat down with Erin for the very first time in a coffee shop in Los Angeles, before we even said one idea what the movie should be, I said “For what it’s worth, I think there are three movies here.”

There is also the option of going meta, where they make a TV movie about Mike’s family and their Christmas House. That way, you can cast the fake TV versions of you, Jonathan Bennett, Treat Williams, and Sharon Lawrence.

You are going to need to cut all of this out of the interview for when I steal all of these ideas. [Laughs]