‘Psych 3: This Is Gus’ Cast on Shawn and Gus’ Challenges, Ladies’ Night & More

Psych 3: This Is Gus “is Psych growing up a little bit,” Maggie Lawson (Juliet) says.

In the latest installment in the franchise — the series ran eight seasons (2006-2014), followed by two movies (2017, 2020) — Gus (Dulé Hill) is preparing for his upcoming wedding and fatherhood. However, his best friend Shawn (James Roday Rodriguez) has some questions about the bride-to-be (Jazmyn Simon’s Selene) and drags Gus along for the ride to track down her estranged husband, Alan (Allen Maldonado). Meanwhile, Lassiter (Timothy Omundson) continues to recover from his stroke (mirroring the actor’s own recovery) and tries to figure out what’s next for him career-wise.

TV Insider spoke with the cast and executive producers about the latest hijinks.

“Shawn’s not always the best with change,” Rodriguez admits. “The dream has always been we’re never going to live more than two seconds away from each other and our backyards are going to be conjoined by some sort of float pool and a water slide.” So you can imagine how he’s handling the developments in Gus’ life.

“Gus has evolved more, grown emotionally more than Shawn has,” Hill says. “Not being able to have the confidence that Gus will always be there for him will be a challenge for [Shawn] emotionally.”

That tracks with how both deal with change. “Gus boldly goes into the next stage of his life every time — getting a real job, getting married, having a baby — [while] Shawn is reluctantly dragging himself along, only because he feels like maybe he has to,” executive producer Steve Franks explains. “This might be the one where Shawn’s like, ‘I don’t know if I can follow you here.'” As the trailer shows, Gus can’t even be sure if he knows his fiancée’s name! “Selene is literally eight different people,” Simon says.

It’s easy to see why Shawn then ends up going down a bit of a rabbit hole looking for answers. “[That sort of investigation] is what makes him feel alive,” Rodriguez says. “[He’s also] this fiercely loyal, protective best friend who would do anything for Gus,” including maybe finding the answers he’d rather not hear. But there may be a selfish part to it as well, Hill points out, since Shawn’s not quite “thrilled” about the developments in Gus’ life and may not be opposed to the wedding being called off.

But Gus is going down a rabbit hole too — as a groomzilla. “He’s all in,” according to Hill. “He wants it to go perfectly, which, of course, in the Psych world, it definitely will not, but it’s going to be as perfect as can be for Gus.” Complicating matters is Selene’s estranged husband. Their relationship “was built on a lie,” Simon says. “It was built in anxiety and fear and lust and passion, which really makes Gus jealous. It kills Gus that her previous relationship was built on all this passion, but her and Gus have something real and solid and it’s built on love and they’re starting a family. Gus is probably going to want a little of what the other guy has, but she loves him for all the things that he has.”

For Hill, this allows him to play sides of his character he enjoys — “Gus being insecure and Gus going down rabbit holes” — in the film. “Gus wants to be the cool debonair guy. He wants to be Morris Taye Diggs Chestnut Washington Idris Denzel,” he says. “Underneath, he knows that he’s not. And then you get somebody like Allen Maldonado coming in to play Alan, with all this pretty hair and out there being all physically fit.”

While Shawn and Gus are running around, Juliet, Selene, and Karen (Kirsten Nelson) have what the stars call “ladies’ night” with their own investigation. Juliet, in particular, is very protective of Selene and, as a result, very much against the guys’ sleuthing considering she finally has a friend, something that excited Lawson.

“She’s never had anybody — other than Lassiter, who’s very hard on them,” she explains. “To have a gal pal to share in [understanding Shawn and Gus’ hijinks] is fun.” So having the guys investigate Selene, “I’m like, ‘You guys, don’t mess this up for me!'” They then bring in Karen, who’s trying to get some time with her family away from work (by camping), which is tough to do with the demands of her job. That shows the “vulnerable side of her, her soft side,” says Nelson. “And I love to camp, so the fact that they let me go into the woods with the right equipment was a gift.”

Those ladies’ night scenes are “really what Psych was missing, right?” Simon points out. “James and Steve really went there and allowed a friendship to develop and things for the ladies to do.”

Executive producer Chris Henze also enjoyed the change. “It was just really fun to put them all together and just see a completely other dynamic and realize that the show that relies so much on the bromance of Shawn and Gus also works beautifully with the romance of our female leads,” he says, adding, “It’s become a lot more fun lately to have the girls saving the guys.”

So whose investigation is more fun? “Ours is,” Lawson says. “Girls have more fun.”

Lassiter at a Crossroads

Psych started showing Lassiter’s recovery in the second movie, Lassie Come Home, and this time, the focus is on “his emotional recovery,” Omundson previews. “He almost goes through this existential crisis of who he is, who he’s going to be, and what he can still do with his career and as a husband and a father.” That leads to an emotional conversation with Henry (Corbin Bernsen). According to Omundson, “they’ve had similar career paths, and Lassiter always respected Henry as a cop. It’s also who he is as a dad and a family man.”

We do see Lassiter as a dad, with his daughter Lily (Sophia Reid-Gantzert). “The way that she helps Lassiter — there’s a scene where she’s checking his phone because she knows he got a text, but she’s also aware that he left his reading glasses inside — is stuff I do all the time in real life,” Omundson shares. “So that was actually a line that I pitched because it’s a real life situation.”

In Psych 3, “you get to see Lassiter sort of humbled and relying on Shawn and Gus in a way that he’s never relied on them before,” the actor says, and for him, “this whole Psych fam always has created such a safe environment for me. Trying to act during the recovery is a pretty terrifying thing, and to have this group there, to know that they will catch me if I fall, I couldn’t ask for a better group around me.”

What you’ll see from Shawn and Gus with Lassiter is “an opportunity for [them] to look within themselves and be empathetic and respect the man for who he is at his core,” Rodriguez says. “Even though they’ve certainly had their differences over the years, there’s a mutual respect.”

Does Gus know who he's really marrying? Plus, find out when the sequel to a sequel will premiere.

With Gus and Selene about to become parents, does that mean that Shawn and Juliet could be next? “They thought they knew where they stood on all that stuff,” Rodriguez explains. “Shawn and Juliet have been living their lives and going on crazy adventures and putting themselves first for a long time. But when it’s up close and personal like that, sometimes things can start to look different and they’re probably going to have to make sure that they’re still on the same page.”

But don’t expect to get closure on that topic. “We open that door a little bit at the beginning,” Lawson previews. “There are just some questions that are coming up and we don’t really know what’s going on, but there’s a little crack in the armor around this decision they’ve made. … We don’t end the movie with any sort of clarity, which is bold.”

What’s Going on With Woody?

Kurt Fuller is in the movie, and how he appears is a result of the actor filming Evil in New York at the same time as Psych 3 was shooting in Los Angeles, Franks confirms, “otherwise he wouldn’t have been able to be in the movie, so we made sure we got him in. And by the way, Evil‘s just so good, so we can’t fault him for working on that show. But he’s awesome, and he always delivers.” 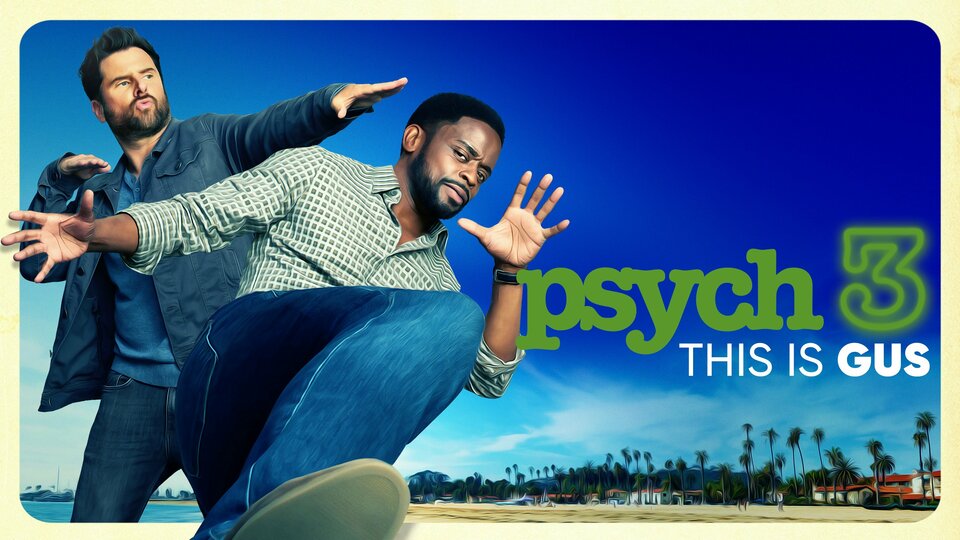