Special Agent Timothy McGee’s (Sean Murray) personal and professional lives collide in the November 8 episode of NCIS when it turns out that his mother-in-law, Judy Price Fielding (Patricia Richardson), is the one who found the victim in the team’s latest case.

“This whole job has been a blast. What a great show to work on. I don’t know if an actor could ask for a better working environment,” Richardson raves to TV Insider. Her scenes took her to the sets for the Navy ships, McGee and Delilah’s (Margo Harshman) apartment, and NCIS. “It’s a fun part except for the part where I have to see a dead body… I just would love to play the character again because she’s so fun.”

“And I rode that line in Home Improvement a lot,” she continues. “In the middle of the comedy, we had some more serious scenes… we were doing a comedy, but our fight would get maybe just a little too edgy or a little scary, but the audience gets a little nervous. Then I storm off in a fury and then Tim [Allen] would nail them with a line that was funny and it would just release all the tension. And to me, that’s really the best of both worlds… I think I’ve always loved it because the audience is off guard.”

Richardson introduces us to Judy and teases her guest spot.

Judy looks like so much fun just in the promo.

Patricia Richardson: She’s such a great character. She lies to her daughter all the time because her daughter is really overprotective. And so as a result of that, [Delilah] never lets her do anything. She’s always on her ass. So Judy lies to her all the time. Delilah never knows what she’s doing. And so McGee gets caught between his wife and his mother-in-law at some points during this episode because we’re always fighting — and Judy’s a little promiscuous apparently. So how does Delilah handle her mother being in the middle of a case?

She’s pretty shocked. So is McGee. McGee is horrified. He can’t believe it. Delilah didn’t know Judy was on a cruise. She had no idea. So they have to first get past “Why didn’t you tell us about your going away on the cruise thing?” …

She has an adventure on the cruise. That of course brings McGee and [the team] to the cruise. She’s just caught red-handed lying to them… she finds the victim’s body, and McGee goes to investigate it. He has no idea [and asks], “Where’s the person who found the body?… Oh, it’s this woman Judy Price… That’s my mother-in-law!”

What’s it like for Judy to be involved in the case?

First, she’s really just trying to lie her way out of it. And then she’s kind of sad. She knew the guy. She’s a pretty out-there character, but — I don’t know how they cut it or what they used because I did many scenes different ways — there’s some “oh my gosh, I knew this guy, it’s disturbing, what has happened is really upsetting.” It’s such a great character because there are so many different things she goes through in the course of this happening. 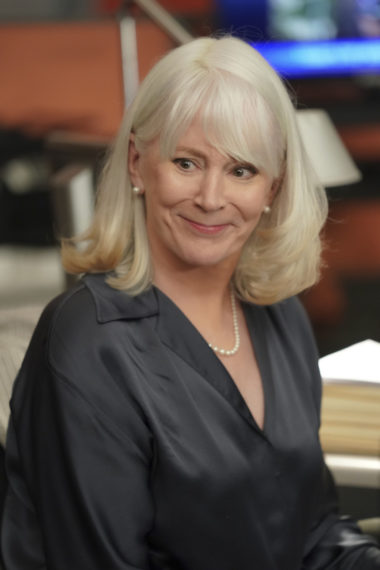 She’s a free spirit. She has no shame… [That bit] is really indicative of her and him. I’m in the episode quite a bit. The first week I think I did every scene every day. It’s a really great guest part. I’ve done some great guest parts, but I don’t know, I never even thought about this, whether it’s the best one I’ve done, but it’s certainly a wonderful part. As soon as I read it — because they just offered it to me and my manager called and said, “Oh it’s NCIS” and I went, “Oh my God, that’s my favorite show.” I’m from a big military family, and everyone watches NCIS. This is a huge family event now. I don’t know that I’ve ever done anything that became such a huge family event.

What does Judy think of McGee and Delilah’s relationship?

She totally adores him, and of course adores her daughter, loves both of them. She really appreciates McGee because he’s so helpful.

And preview Judy’s interactions with the rest of the team. What does she think of her son-in-law’s colleagues?

When I got there, I hadn’t watched this season and I didn’t know that Katrina Law had joined, and Katrina and I — one of the best [Hallmark or Lifetime Christmas movies] I ever did was with Katrina and it was called Snow Bride. She was so funny in that, wasn’t she great? And so when I saw her, I was like, “Katrina!” I’ve been following her on Instagram ever since. So I’ve watched her have her baby and I had no idea she’d be there. So that was really cool, that I got to see her and she’s so gorgeous. And also I had a director who I’d worked with before. Michael Zinberg directed me in the episode that I did of Quantum Leap with Scott Bakula years ago. The team seems so amused by Judy in the interrogation scene in the promo.

I’d love to see McGee’s reaction to that.

Yeah. I kind of don’t see that just because of who he is and who this character is. It’s such a fun character. In the episode that I’m in, he talks about his divorce a little bit.

My most difficult scene was the one we shot last, but it’s one of my earliest scenes. She’s upset. It’s one of those scenes where you walk the line between comedy and serious really carefully because there’s more than one thing happening. That scene was kind of difficult to do, but I think it was a good scene and it’s towards the beginning and it’s really when you get to know her for the first time and Wilmer [Valderrama]’s in it and Sean is in it. It was a little bit tricky, but a really, really great and fun and challenging to do the whole thing. I have all these scenes back at the house too [where] we’re dealing with this situation back at the home, conferring and there’s more stuff going on there. And there’s another character that’s involved, which I won’t tell you about.