You know what they say about the best-laid plans… they often go wrong. Or at least, that’s the case for the group this week on The Walking Dead: World Beyond, which sees a team make its way into the Civic Republic Military headquarters only to, perhaps unsurprisingly, have everything unravel. Here’s how it happens…

The general plan for the team, which consists of Iris (Aliyah Royale) and Felix (Nico Tortorella), is to get into the CRM, convince Iris’s father Dr. Leo (Joe Holt) and sister Hope (Alexa Mansour) to leave, and then depart through a door that Silas (Hal Cumpston) will leave open and head for the other CRM-affiliated community in Portland. A small group goes to Silas’ new home and manages to talk to him alone, and eventually, he agrees to help… probably because it’s Iris who asks, and the guy clearly still has feelings for her. For his part, things go well at first; he manages to talk his boss into letting him have the truck so he can “clear some walkers and take them to the CRM.” 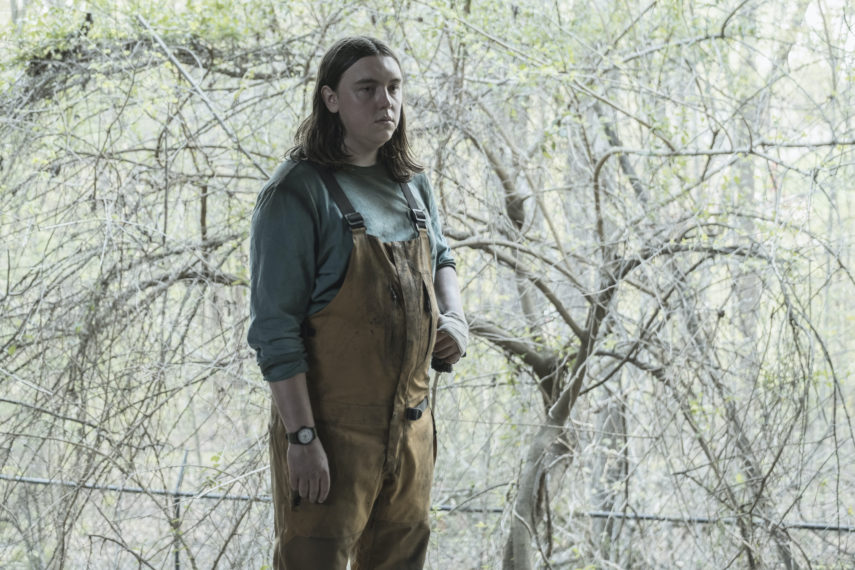 For the rest of the team, things are a little hairy from the start. The plan is to have Indira’s (Anna Khaja) group pretend they captured Felix and Iris, and then they’ll hand them over to the CRM, where the CRM will question them and, then presumably, let them go. And that works… right up until they head for the meeting point with the Civil Republic. On the way, they notice someone on horseback following them — it’s Percy (Ted Sutherland), dressed in Elton’s (Nicolas Cantu) jacket. He’s determined to be part of the mission, and while he had once said he’d join them to keep Iris safe, it’s also pretty darn likely he wants another shot at killing Huck (Annet Mahendru) and avenging his uncle. Left with no choice as CRM approaches, they let “Elton” stay.

Meanwhile, various other characters get up to various other things. Elton continues to bond with Asha (Madelyn Kientz) and it’s clear he’s got a bit of a crush on her; she reveals that her mom is the one using the CRM medical supplies and that if word got out about that, it would be very, very bad for them. (So the word’s definitely going to get out about it, somehow). In the CRM base, Huck goes through her mom’s office and finds some coded papers that clearly horrify her. Also in the CRM base, Hope’s started to genuinely enjoy CRM life as her theory about using yeast to “infect” walkers does well in a preliminary study. The trio arrives at the CRM, where they’re taken into questioning. Thankfully, they’ve managed to concoct a pretty airtight story about where they were, who they saw, and how little they know about the Civic Republic. In the middle of this, Lt. Col. Elizabeth Kublek (Julia Ormond) brings Huck in to verify parts of their stories… and also to let her know that she knows her daughter was sneaking around in her office. Thankfully, Huck is able to recover by saying she just wanted to know her mom’s dinner plans.

After the Q&A portion of the CRM initiation is done, the group is allowed to reunite with Leo and Hope, and they all go back to Leo’s place. There, they break it all down: They have a very limited amount of time to decide if they’re heading for Portland and get to the door. Eventually, they opt to go, although Hope seems to have some reservations. And she’s not the only one. Leo says he needs to say goodbye to his girlfriend Dr. Belshaw (Natalie Gold), but of course, she’s nowhere to be found. Who does find him is Huck, and she tells him all about what she found in her mom’s study. Turns out, the CRM very much did destroy the Campus Colony; they set the “column” of walkers on the place, and they’re using those who turned to conduct experiments. So, presumably, if the group heads for Portland, they might be wiped out. But as the episode ends, heading for Portland isn’t an option, anyway. As Silas arrives with his truck, he’s cornered by the CRM’s soldiers and marched into the building. And in a post-credit scene, Huck finds out her mom was called to the CRM headquarters on urgent business — for the time being, she and the rest of the military will answer to “Jadis Stokes.” That’s right, Anne’s (Pollyanna McIntosh) back!