‘Paranormal Lockdown’ Spends Halloween in a House of Horrors

How’s this for the perfect trick-or-treating post-game? Otherworldly investigators Nick Groff and Katrina Weidman are serving up a Halloween-night special installment of their hit Destination America series Paranormal Lockdown that is so big, the two-hour event is premiering on its sister network TLC first, then re-airing on Destination America.

In Paranormal Lockdown: The Black Monk House, Groff and Weidman head to the UK to explore a residence in Pontrefact, England known for some of the most violent poltergeist activity ever recorded. Think the Amityville Horror on growth hormones. Here, the pair—who usually spend 72 hours locked inside whatever site they’re investigating—discuss why they opted to stay at the eerie address for an exhausting 100 hours, what they experienced and what demonic forces lured them across the pond in the first place.

OK, explain to us what Black Monk House is.
Katrina Weidman: So historically, the Black Monk House haunting started in 1966 with Joe and Jean Pritchard and their children, Phillip and Diana, they were pre-teen teenagers. The whole family went on vacation, but Phillip stayed behind with his grandmother. One of the first things that started happening was this chalky dust would appear at height level in mid-air and go to the floor. They couldn’t figure it out, so they kind of brushed it off like “We don’t know what the answer is to that” but they didn’t think much of it. And then things started happening around the house, like objects would disappear only to reappear later, they started hearing voices, hearing knockings and rapping, things like their grandmother clock…it came flying down the stairs once. So very weird things started happening and they lovingly named the entity “Fred.” In the papers it was called Mr. Nobody.

In the papers? Like it became…
Weidman: It became a big thing in England after a couple of years.
Nick Groff: A skeptical newspaper journalist came to the house and was like “I don’t believe in any of this stuff.” He went in and he’s filming and taking pictures and nothing happened. He goes to leave and he gets socked in the face by an unseen force. He freaked out and started telling everybody publicly about it.

And the chalk thing, is that like, that sounds very unique to a haunting.
Groff: It is.

Usually it’s like an ectoplasm or you see orbs or something.
Weidman: That too. They had green slime on their walls at some point. The haunting went away for a little bit and when it came back, it was violent and it started attacking people physically. The daughter claimed she was choked and dragged up the stairs by her neck. Normally you see that kind of chalk stuff, slime, all that stuff, normally that’s found in poltergeist cases. But poltergeist cases break off at one point, so it either stays a poltergeist case—it can last as short as six weeks and it’s gone and you never know what happened to it—or it turns into something much more sinister, which we believe is what the Black Monk House is. It’s more on the level we would call demonic.

Is it that a poltergeist left and something worse stepped in?
Weidman: It’s one of two things. It could be something disguising itself as a poltergeist so you sort of let it in and “It’s not that bad, we’ll call it Fred, he’s nice!” That’s an invitation then for this darker thing to come through and kind of take a hold. Or, the poltergeist actually opened up a doorway for something else to come in, so it’s kind of like which came first, the chicken or the egg? We don’t really know, but that’s kind of how this works.
Groff: We came in with the objective to figure out what this negative entity is, but I was also having things happen in our house and everything kind of tied together.

Your house, like your personal home?
Groff: Yeah, personally in my house. What’s weird about this whole thing is that we started having things happening in our [lives that tied to] the Hinsfield House from Season One of Paranormal Lockdown. Things followed us home and we just started wondering “What is this? Why is this happening to us?” I live in a brand new house that was built in 2004, so we started documenting it. My wife and I even saw our security camera capturing this anomaly, an apparition moving in our basement.

RELATED: Halloween Specials, Marathons and Premieres: FearFest, Amish Witches, The Living and the Dead and More

That is terrifying!
Groff: It is terrifying! It’s a different story when we go to locations. We’re going to go in, we’re going to investigate and see if it’s haunted, not. Our objective is to try and discover something new in the paranormal field so we can push the paranormal forward instead of rather than being redundant and prove or disprove. So we are being logical and at the same time, we are trying to validate our personal experiences with the spirits.

Did you have any new equipment for this?
Groff: Yeah we had a whole arsenal of gear…we used thermal 3D mapping, we have all new audio devices. All the way down to the typical recorder up to your updated camera equipment. I could super geek out right now and talk tech.
Weidman: We got to use all your dream equipment. Boo goes there?! Weidman and Groff step up their ghost-hunting game

After the initial haunting in ’66, how long did the Pritchard family stay there?
Groff: Well, that’s the creepiest thing….the haunting on this land has been happening long before they lived there. One of the biggest bloodiest battles took place during a civil war in England and it was right there in Pontefract. It was right in that major area where the housing developments were built. Low-income housing got built up on top of it afterward, on the land where kings had been executed and this monk was hung and murdered. That’s where this legend comes from. We never thought we’d ever go to the Black Monk House. We had it off our radar. I’ve been researching for years, but it kind of fell into place when I started documenting evidence on my house that was indicating us to go there. Something from the other side or whatever. Noise was coming through on one of my devices after I experienced [events] in my house that we captured on camera. I investigated it and it tied together. I was like, “We have to go to the Black Monk House.”

What did you experience when you first approached the Black Monk House?
Weidman: It was immediate. The minute we walked through the door I remember it feeling really heavy, almost like walking through quicksand or something like that. It was this really heavy, oppressive feeling, this intensity. There was one day, on the first day, I remember, I sat on the couch and I like completely passed out for fifteen minutes and I don’t even remember going to sleep or sitting down. And Nick, you were feeling nausea.
Groff: Right. When I walked in, I felt like I wanted to vomit all of a sudden.

They stayed that long?!
Groff: No, no, no! [Laughs] There is backstory on that, and it’s really scary. You’ll see that in the Black Monk episode. We thought the same thing, until we discovered some new information that no one really talks about and it got really interesting at that point.
Wediman: Right.
Groff: It’s just layers and layers and layers of negative energy, you know? It was hard to decipher what was what, spiritually what was what. Could it be the this thing we discovered? Could it be this? You just know when this negative thing comes and telepathically gets into your mind and you have nightmares…it was a strong draw to that house. So it was more like a trap to me, like it has us. For me, it started 3,000 miles back home, and all this sort of thing works in the spiritual world.
Weidman: We both had things follow us from Hinsdale. So even after Black Monk, I’ve been having things happen in my house that aren’t normal for my house.

And the way the special is done, we are seeing more of your personal lives, we see your home and your place. Do we see people in your lives?
Groff: Yeah, you’ll see that we were documenting a lot of footage at my house because I didn’t know what’s going on. We said “Look, something’s going on here, so why not be an open book?” So we included all of that into the special because of what happened in my house and Katrina and how we tied it all in. It’s this massive story that escalates over the year and it’s compiled into the show so it’s pretty impactful. More like a documentary.

It’s airing on Halloween, which many believe is the one night of the year where the veil between the living and the dead is the thinnest. Do you subscribe to that, as well?
Weidman: Traditionally, you’re raised to believe All Hallow’s Eve as a holiday is the time where you could make contact with somebody. So I think there’s something to it. I mean, even the Day of the Dead for Mexico on November 1 is the time you honor your relatives and that’s the time you can talk to them. If you look at traditions, they all start from something. So is it a collective belief that something is making the veil thinner? Or does it just happen that way? I don’t know where I stand on that, but I definitely celebrate Halloween and Day of the Dead and everything. What I think we’ve found through our work is that sometimes the veil is thin no matter where you are, no matter what time of day.
Groff: I love Halloween. Now, where Halloween starts from, and look up Samhain, Ireland is a big thing. The queen used to send Knights into this cave to face their fears. So you crawl into this cave and it opens up and it’s like, really creepy. And I think they used to do sacrificial rituals in there, and the knights would have to face themselves and children would wear masks so they wouldn’t see these evil demons or whatever was indicated as bad things back then. And, if they could face their fears, they could come out. So, that’s where Halloween kind of started with the masks. I traveled to Ireland and had the opportunity to go way out into the farmlands and there’s this small, little cave entrance. You have to try it someday, it’s creepy as hell, but what you need to do is talk to certain people that allow you to go in because it’s private property, so you have to ask to go in. The people who allowed us were like the protectors of this spot, so I think they were Wiccans, and they allowed us to go in but they would have to go in first and they would have to come out in last to protect us.

RELATED: Destination America’s Live-Stream of “Ann: The Haunted Doll” Is Creepy and Boring All at Once

How’d that work out for you?
Groff: I went in there and did that whole thing and felt like I somewhat faced my fears in the complete darkness. It was just weird when you think about it.

Don’t you two normally face your fears when doing this job?
Groff: Every other week is Halloween for us! 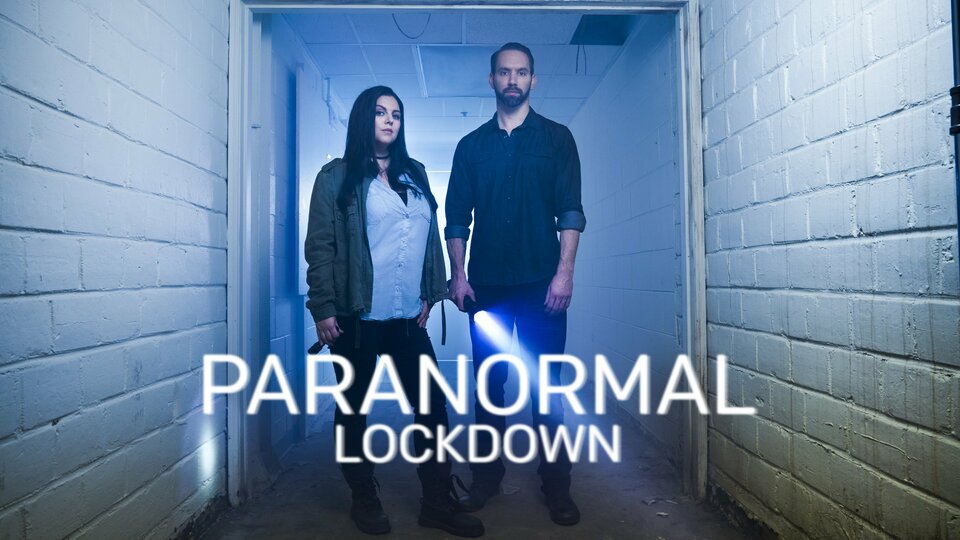 Paranormal Lockdown where to stream