Who Is Father Paul on ‘Midnight Mass’? Episode 3 Explained

If you haven’t started watching Mike Flanagan‘s Netflix series Midnight Mass, you may want to turn back because we’re delving into spoiler territory with this Episode 3 breakdown.

In the installment, “Book III: Proverbs,” the truth about Father Paul Hill’s (Hamish Linklater) identity is finally revealed, or rather confirmed. As miracles begin to sweep over the island, little clues point toward the reality of their savior, as it turns out that Father Paul Hill is actually Monsignor Pruitt, the man who oversaw their church for decades.

Rejuvenated and youthful once more, he goes unrecognized by the young parishioners of St. Patrick’s Church. Before reaching the pivotal and revealing third episode, breadcrumbs hint at Father Paul’s true origins. Scheduled to return from a pilgrimage, Monsignor Pruitt was noticeably absent from ferry logs to the island, but Father Paul, a “newcomer,” showed up instead. Despite claiming he was sent there by the priest, his knowledge about the island’s citizens seems a little too in-depth to have simply been passed on by a senile man whom Father Paul claimed was recuperating in a hospital. Upon his return to the island after years away, Riley Flynn (Zach Gilford) suggests he’s seen Pruitt on the beaches amid a storm, but later revelations hint that it’s a much darker entity donning the old man’s familiar coat and top hat combo.

In the second installment, Father Paul shows up at Dr. Sarah Gunning’s (Annabeth Gish) door to deliver her elderly mother mass, during which the old woman “mistakenly” calls him John, Monsignor Pruitt’s first name. Sarah corrects her mother but considering she’s one of the island’s oldest residents, her memory of the priest would be better than most, even given her declining mental state. During that exchange of mass, the priest shows special care toward the woman that hints at a possible history between them. Later that evening, Sarah’s mother begins having a fit, claiming she saw her daughter’s father through the window. She remarks on the clothes and face but sounds frightful.

Could it be the figure donning Monsignor Pruitt’s hat and jacket that also tipped off Riley? And if so, that adds a layer of insight that Father Paul isn’t just a younger version of Pruitt, but possibly Sarah’s father as well. As Father John’s time on the island continues, he talks about resurrection in his sermons and after paralyzed Leeza (Annarah Cymone) begins to walk, it’s clear there’s some greater power at work in Father Paul’s appearance. Episode 3 answers some key questions, such as, what was in the big chest Father Paul brought to Crockett Island, and why is he lying to the islanders about his true identity? Picking up with Monsignor Pruitt’s pilgrimage, the installment shows an elderly man in the throes of dementia as he visits the Western Wall in Jerusalem.

Recounting the events from St. Patrick’s confessional, Father Paul asks for forgiveness for lying to his people about the nature of his identity and explains why he’s essentially resurrected himself. While in Jerusalem, he wandered off and got lost in the desert. 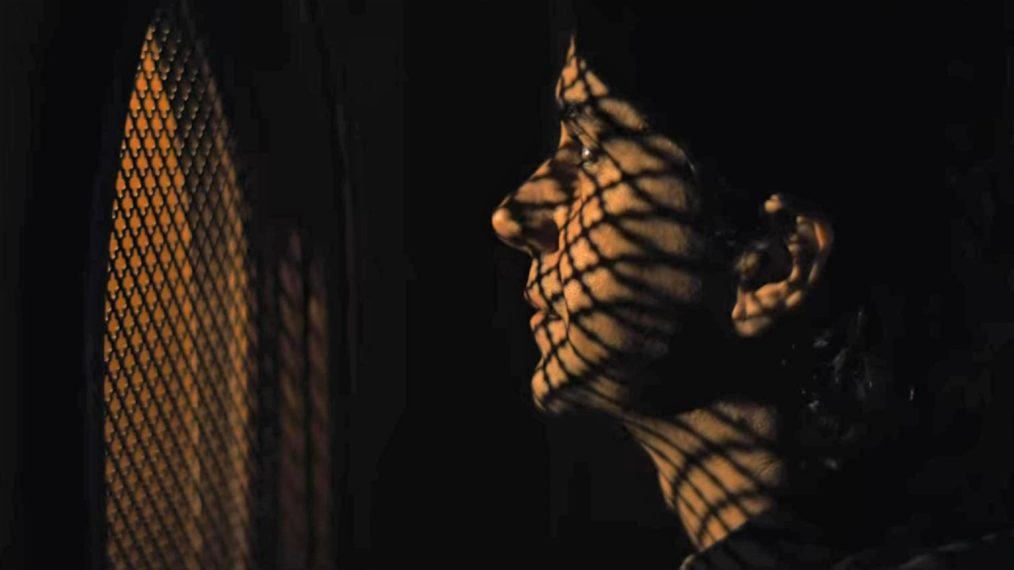 Likening himself to Saul from the Bible, Father Paul remembers finding the mouth of a dark cave where he took refuge. In there, he encountered a creature which attacked him and drank his blood — so, for all intents and purposes, a vampire.

As he was drained, so were Monsignor Pruitt’s worries, and after this creature, whom he deemed an angel, was done with him, this being fed the man its own blood. When Pruitt awoke, he was young again and assumed the identity of Father Paul, a nod to Saul’s own saintly name. Realizing that his own miracle came from this mysterious being, Father Paul took it with him to the island so he could deliver some miracles himself, hence the strange sightings of a Monsignor lookalike around the island as the angel dons the hat and coat. Before this realization is made at the end of the episode, Father Paul starts to become ill once Leeza’s ability to walk is restored. Following him into the priest’s quarters, Bev Keane (Samantha Sloyan) peers at a photo on the wall and realization flashes across her face. It’s later shown that the image of a young Monsignor Pruitt matches that of Father Paul.

After recovering, Father Paul stands to peer out at the islanders who seek miracles for themselves, given Leeza’s experience, and a painting of the old Monsignor looms in the background as a bit of foreshadowing. So, what is father Paul’s goal? It would seem he’s spreading the rejuvenating wealth as Warren Flynn (Igby Rigney) catches the man pouring a flask of red liquid into the communion wine. Could it be the angel’s blood that remade him? Considering the other bits of healing taking place, like the de-aging of Sarah’s mother or Ed Flynn’s (Henry Thomas) fixed back, there’s a possibility that’s the case. Only tuning in can uncover the mysteries at hand. Let us know what you think of Father Paul’s true identity in the comments below. And don’t miss out on the rest of the series as Midnight Mass streams on Netflix.