Digging into the concept of “what if,” the opening episode packs in plenty of twists and turns, courtesy of creators Russel Friend and Garrett Lerner. Tracking Joe in timelines where he’s a rockstar, nurse, and cop, the series weaves an intriguing web of overlapping characters and conflicts, particularly when it comes to romance and family. 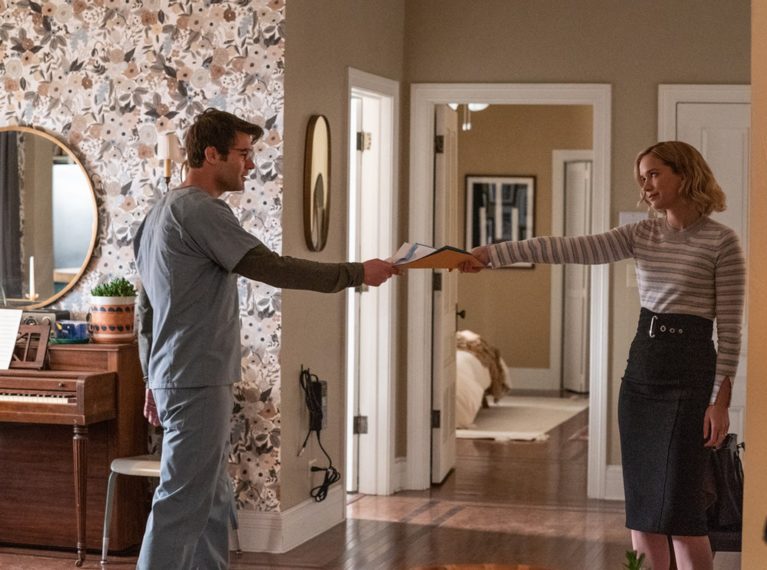 One thing tying the three worlds together is Joe’s past which includes his father’s death on 9/11. Despite his lack of onscreen presence, Christopher Kimbreau looms large and that’s no coincidence. “Episode 2 really focuses on that a lot,” teases Friend. “Since [Joe’s dad died] when he was 14, that’s a part of all three Joes’ lives and it’s his core emotional wound.

“It’s something that is really important to his character and somewhere we explore further,” Friend continues, further teasing, “Maybe we’ll even meet his dad in a flashback.” Bringing the show into the present is the mention of COVID, which doesn’t take up much space in nurse Joe’s story apart from a brief mention by his son. “We don’t want to have a show where everyone’s wearing masks in every scene, but we do want to acknowledge that we’re making a show about the real world and real people,” shares Lerner who also revealed that filming began in March 2020 “just before the NBA shut down and Tom Hanks had COVID and then the whole world went crazy.”

This meant that the show’s production went on a months-long hiatus. Thankfully, the showrunners agree that keeping things upbeat is the way to go. “Overall, we want the show to have a real sense of optimism and hope,” reveals Friend, “which to us feels like that’s what we all want coming out of this very dark time.” In the cop timeline, he starts off single, but after a chance encounter with Amy, it becomes apparent that the two will explore a romance. The catch? Jenny was pregnant on graduation day, meaning Joe has a son in all three timelines, he just isn’t aware of it in two. Jenny tells rockstar Joe at a college reunion that she gave their son up for adoption, which shocks him as he and Amy have been struggling to start a family. As for cop Joe, he comes face-to-face with his son at the same college reunion party, but Jenny doesn’t clue him in on their connection. In other words, there’s a lot of complicated storytelling going on. “It definitely inspires active viewing, which is something we like,” confirms Lerner. And considering the overlapping details in all three paths, there’s something interesting about the fact that he hasn’t fallen in love yet in the cop timeline. When asked about whether viewers should show preference towards Amy considering the show is setting up her and Joe’s love story in that third timeline, Lerner teases, “I think we have to wait and see how it goes. Classically, as storytellers, when you put together a love triangle, you’re hoping that your audience is [divided]. Our concept is so unique and it’s like a three-dimensional love triangle.”

“We’re trying to say no world is better than the other,” Friend jumps in. “We want to say the same thing in terms of whoever he’s with, Amy or Jenny. We want to say, basically whatever choices you made, you’re in the right place.” While Joe’s love lives will certainly remain an important factor, the reality of his son’s existence in timelines where he didn’t end up marrying Jenny remains a motivating factor as well. “We’re very aware that child exists in each world and that will be a driving force in all of the stories that we’re telling,” teases Lerner.

“The idea of having a child and starting a family is incredibly important to him because of the trauma he suffered when he was a kid,” explains Friend. “So for him, this is a central focal point.” Don’t miss Joe’s journeys as Ordinary Joe‘s three timelines unfold this season, stay tuned for more twists and turns by tuning into NBC.