Let there be no doubt about it: Magna (Nadia Hilker) has changed quite a bit since she was introduced on The Walking Dead, and plenty of that transformation has to do with Kelly (Angel Theory). Now that their merry band of survivors is down to two — Yumiko (Eleanor Matsuura) went to the Commonwealth, Connie (Lauren Ridloff) is missing, Luke (Dan Fogler) is presumably at Oceanside — Magna’s doing everything she can to keep her friend safe and close… which is why she had that perhaps-controversial conversation with Carol (Melissa McBride) this episode. But for Kelly’s part, she’s formed a bond with the perpetually heartbroken survivor: Theory says the Carol-Kelly bond boils down to the “beauty in being misunderstood.”

Hilker and Theory chatted with us about the relationship between their characters, what it was like to film that gory scene by the river and how Magna feels knowing that Carol continuing to take Kelly to look for Connie. What was it like working with all the horses in this episode?

Nadia Hilker: I loved it. I grew up with horses, I love them. It’s different working with them on a set where there is a lot of people, and safety is super important. I felt like a little kid in a candy store, and it was fun.

Angel Theory: Working with the horses on the set or even just in training gives a sense of calmness. When we have nature around us, and we’re with the animals, I think it puts us more into this world. And it makes us feel happy! On the opposite end of the spectrum from that, what was it like to film that scene with the dismembered horses by the river? Did that look as nasty to you guys, on set, as it did on-screen?

Hilker: Yeah, it did. You know on this show it’s all fake blood and well-made plastics, but it helps. I even stopped myself from looking closely, because I wanted that to be in the scene. What was hardest for me — and I don’t know about you, Angel — was the smell. The smell wasn’t there. That was hard for me to act, because of the look of it; it’s super hot, and [the horses] have been just lying there, and imagining the smell was even more horror-like than the visual part.

Theory: I agree with that. We are filming around those fake carcasses, and Greg Nicotero and the whole department are so great at making them look so real. And they get it done so quickly. But back to Nadia’s point, we’re supposed to be in this scene, and I can only imagine what that smell would be like in real life. It was difficult to play on that, because it was like, do we completely cover our faces? Are we just giving a stink-face? But the scary part of it was the amount of emotion throughout that scene. The lack of giving up from Carol, no matter how late it was getting; the fact that Kelly’s correlating the loss of these animals with the loss of her sister; Rosita being strong-minded and logically thinking; Magna trying to help out everybody and wanting to be strategic. Every character had their own mindset, and the scariest part of it was how it was going to play out. I was happy we were all able to help each other out. Why does Magna feel that accepting Connie’s death would be better for Kelly than continuing to have hope?

Hilker: I don’t think Magna feels that way. But it’s just that I care so much about Kelly, and I sense that she puts all of her eggs in one basket. She puts all of her hope in having Connie back, and I think Magna feels like she’s parenting Kelly. Magna, at the same time, is also hoping that Connie is alive. She hasn’t figured out how she navigates her feelings and her loss. She is trying to do her very best, and I think at times she doesn’t know how to navigate it — she just wants to leave the possibility open that [Connie] might not come back.

Why does Kelly look up to Carol?

Theory: I think there’s beauty in being misunderstood, especially when you have the right intentions. I think Kelly sees that in Carol. She’s very aware of the fact that Carol thrives on beating herself up, and on others beating her up. The one thing that Kelly was able to do was tell her it’s okay. [To say,] “I am going to forgive you. Now you know that I actually see you, and I respect you on a human level, and I know you had no ill intentions against my sister.” We’ve all done some things where we thought we were going in the right direction, but we’d get an end result we didn’t want. Kelly did that by going out hunting by herself, or by keeping secrets from Magna. But she had the right intentions, and I think she connects with Carol on that. 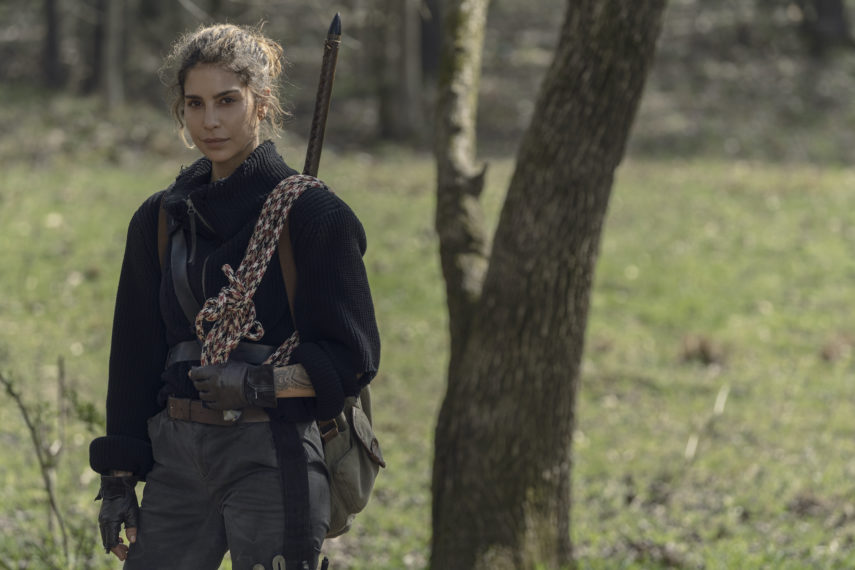 On the subject of comforting Carol — why does Magna go up to her and hug her? Their relationship has been up and down.

Hilker: It was just a very humane moment. Magna likes Carol. She doesn’t always agree with the choices she’s making, but she feels her. I think there’s a lot in Carol that Magna can relate to, and Magna is also a very lone wolf. If it weren’t for Kelly, I think she would have been in a different position this season. But at the end of the day, Magna cares about people and when she sees someone in pain, or as Angel said, someone beating themselves up, if she sees a moment when she can make someone feel better she feels the need to be kind wherever she can. I definitely know Magna cares about Carol and they respect each other. Very much so. At the end of the episode, Carol and Kelly are going out there again, even after Carol told Magna she was going to stop — how is Magna feeling in that moment? Is she angry with Carol? Does she understand?

Hilker: It was a lot of emotions. Obviously, anger. Anger, desperation. But also, in a weird way, Magna trusts Carol; she trusts she has Kelly’s back and watches out for her. The issue for Magna was the fact that she felt Carol is supporting that hope Kelly feels about finding Connie and Connie returning. Her main concern is Kelly and her mental state regarding her sister, and anything that threatens that makes Magna very upset. [She’s feeling] desperation, as I said — just not knowing what to do or if anything she’s done so far has been the right thing. She’s overwhelmed, upset, frustrated.

Theory: I wanted to say I was really happy Magna had that conversation with Carol. That was growth for Magna’s end — I don’t know if you agree, Nadia, but at the beginning Magna was very hot-headed and had a temper and blurted out what she felt. The fact that she went to Carol and had a conversation and expressed a concern was big.

Hilker: It was! That was one of the biggest changes in Magna’s character. Before, that hot-headed Magna from Season 9 was Magna having her crew. She just had her crew. But now it’s down to just Kelly and Magna, and the stakes have changed. Now, everything I care about is Kelly. There no longer is time for her being hot-headed or wanting to get her points across or wanting to be right. Now, it’s no longer about Magna. It’s only about Kelly, and that’s changed her, for sure.