How would you like to be handed the keys to the (Magic) Kingdom? Brian Volk-Weiss—known for the beloved docuseries The Toys That Made Us and The Movies That Made Us—got an all-access pass to make the new Disney+ series Behind the Attraction, which peels back the curtain on the most beloved elements of Disney Parks and Resorts around the world.

“Disney gave me the longest leash ever!” says Volk-Weiss, the director and an executive producer (along with Dwayne Johnson). “People were shocked. Even Disney employees were like, ‘Wait a minute, we’re okay to show you this?'”

After the project was greenlit, Volk-Weiss knew the 10 episodes would feature famous attractions like Haunted Mansion and Space Mountain, but he watched as many documentaries as possible, including The Imagineering Story, and studied other background material to find the hidden gems. “It’s easy to do an episode of all these A+ attractions, but if we really want to connect with the audience we have to surprise them,” he says. “Every now and then when I‘m doing research, I find something that blows my mind. I learned a lot about the first Disney hotel that was built and became obsessed with it. Disney allowed us to make the episode ‘Disneyland Hotels.’”

“I’ve learned weird episodes usually are where people are like, ‘That was my favorite episode.’” For Volk-Weiss, picking the right narrator was extremely important. The production went with Paget Brewster, whose resume includes a Disney credit on the reboot of DuckTales. The two had worked together on Showtime’s That Gal…Who Was in That Thing, and, he says, “I always noticed her voice.”

Volk-Weiss gets sentimental talking about the show days before the premiere. He recalls trips to Disneyland starting at age 6 or 7. Now 45, he returned for the first time during operating hours since COVID shut the world down, experiencing the park with a new level of appreciation.

“We did this third shift tour from 9 p.m. to 5 a.m. I assumed the park would be empty with my crew, but there were thousands of employees. We were there in August and we saw a full test of the Thanksgiving parade. One attraction had a full-time 12-person team of engineers and mechanics making sure it’s safe for the next day.

“I can see the DNA of the attractions. [Going] back to the Hall of Presidents, there are methods or technologies that are used in Star Wars: Rise of the Resistance.” Behind the Attraction highlights some of the unsung heroes in the world of Disney Parks. Volk-Weiss believes there would be no show without the approval of Bob Weis, president of Imagineering, Creative, and New Experience Development. Viewers hear from Weis and also Jeanette Lomboy, vice president and site portfolio executive of Walt Disney Imagineering, who is featured in five episodes. Growing up 10 minutes from the park, she started her career in 1995 as an attractions operator. That opportunity alone was a dream come true.

“We create these magical worlds and impossible things and things that help make memories for guests, but that is only half the story. In so many ways, it’s been refreshing to pull [the series] together for our guests to see how the magic is made,” said Lomboy, who oversees all Walt Disney Imagineering efforts and various pieces of Disneyland Resort and Disney’s Hawaiian slice of paradise Aulani. “It dates all the way back to Walt and the 1950s. One of the things our guests love is our roots are still there.” The new series gives the trailblazer a chance to reflect on all she and her teams have accomplished and appreciate the ones who came before.

“The year I started at Disneyland, women were just being introduced as Jungle Cruise skippers and men were finally allowed to work Storybook Land,” she said. “I never thought I would be where I am today. I pinch myself all the time and am really humbled and grateful. I was inspired by the storytellers who came before me like Mary Blair. To help influence and shape future generations of Imagineers is really humbling.” 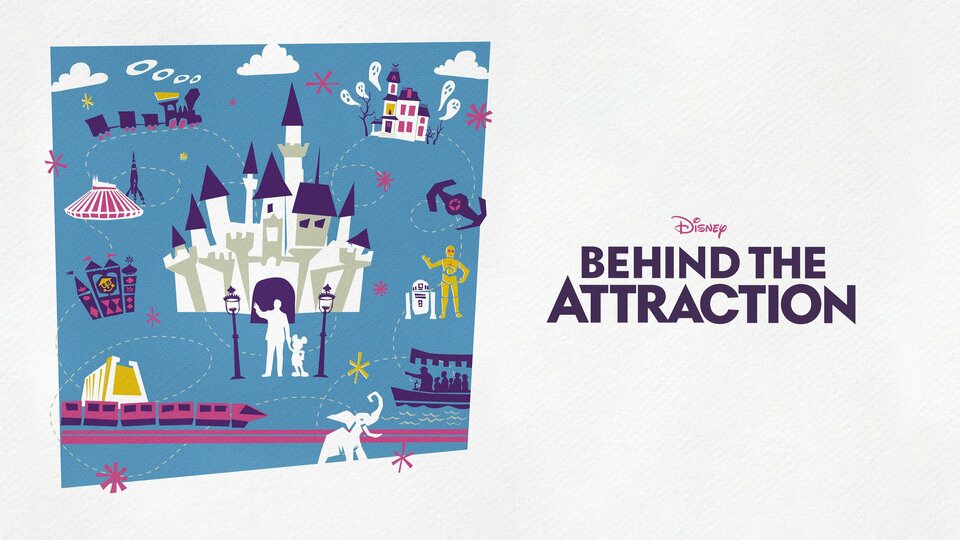 Behind the Attraction where to stream