Lifetime is bringing a new social experiment to its network with its latest series Lookalike Love, which is slated to debut Wednesday, July 7.

The series follows four couples in which one partner has physically transformed themselves into their celebrity obsessions including Kim Kardashian, Beyoncé, Marilyn Monroe, and Barbie. Along with looking like these icons, the individuals also embody their doppelgangers by copying speech patterns, mannerisms, and donning extravagant fashions. 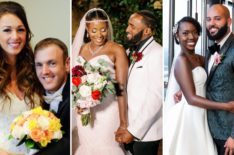 Lookalike Love examines whether the relationships between the celebrity lookalike and their partners are authentic and looks at how the lifestyle impacts their bonds with family and friends. Among the individuals featured is Jasmine, a woman who likens herself to Hollywood legend Marilyn Monroe. In an exclusive sneak peek clip, above, she welcomes a medium to her home believing that Marilyn has been reaching out to her from the beyond. “Today we have the medium coming over to the house,” Jasmine explains in the clip.

She proceeds to share a story about hearing a voice in her home and adds, “That was the first time I really started to believe that maybe she is in the home and that she was trying to channel herself through me.” Whether that’s true or not will remain to be seen in the sneak peek, above.

Joining Jasmine in the series are fellow celebrity doppelgangers Jennifer who embodies Kim Kardashian, Yuriel Michell’e who emulates Beyoncé, and Nannette who channels Barbie (see them, above). Catch the sneak peek above, and don’t miss their peculiar lives unfold in the new series Lookalike Love on Lifetime.