Ready for summer fun, romance, and an attempt to save a small town’s beloved pier? In the latest Hallmark rom-com, Sand Dollar Cove, a real estate development property manager and the land’s owner work together to try to make that happen.

Aly Michalka, in her first Hallmark movie, plays Elli, the property manager who can’t help but fall for Chad Michael Murray’s Brody. He owns the property’s deed and wants to make sure developing a new resort doesn’t affect his town’s pier. (Murray’s previous Hallmark films include Write Before Christmas and Road to Christmas.) 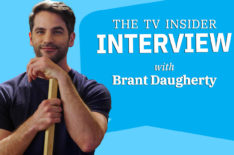 “I think the relationship that Aly and I were able to build throughout this journey we were on really helped onscreen chemistry,” Murray tells TV Insider. “The film will bring a lot of nostalgia back, for all of us who have summer memories growing up with fishing or boats or clambakes or whatever it may be we cherished so very much.”

Aly, what made this the right first Hallmark movie for you?

Aly Michalka: Part of it was it was just perfect timing for my schedule. The pandemic had obviously shut down so many jobs for actors, and so it was just a great thing to be able to jump back into getting on set again. And honestly, I was really excited to shoot in Mystic [Connecticut]. I knew the little town because I had been there for a wedding years earlier. And I did really like the character of Elli and I felt like I could do something with her. 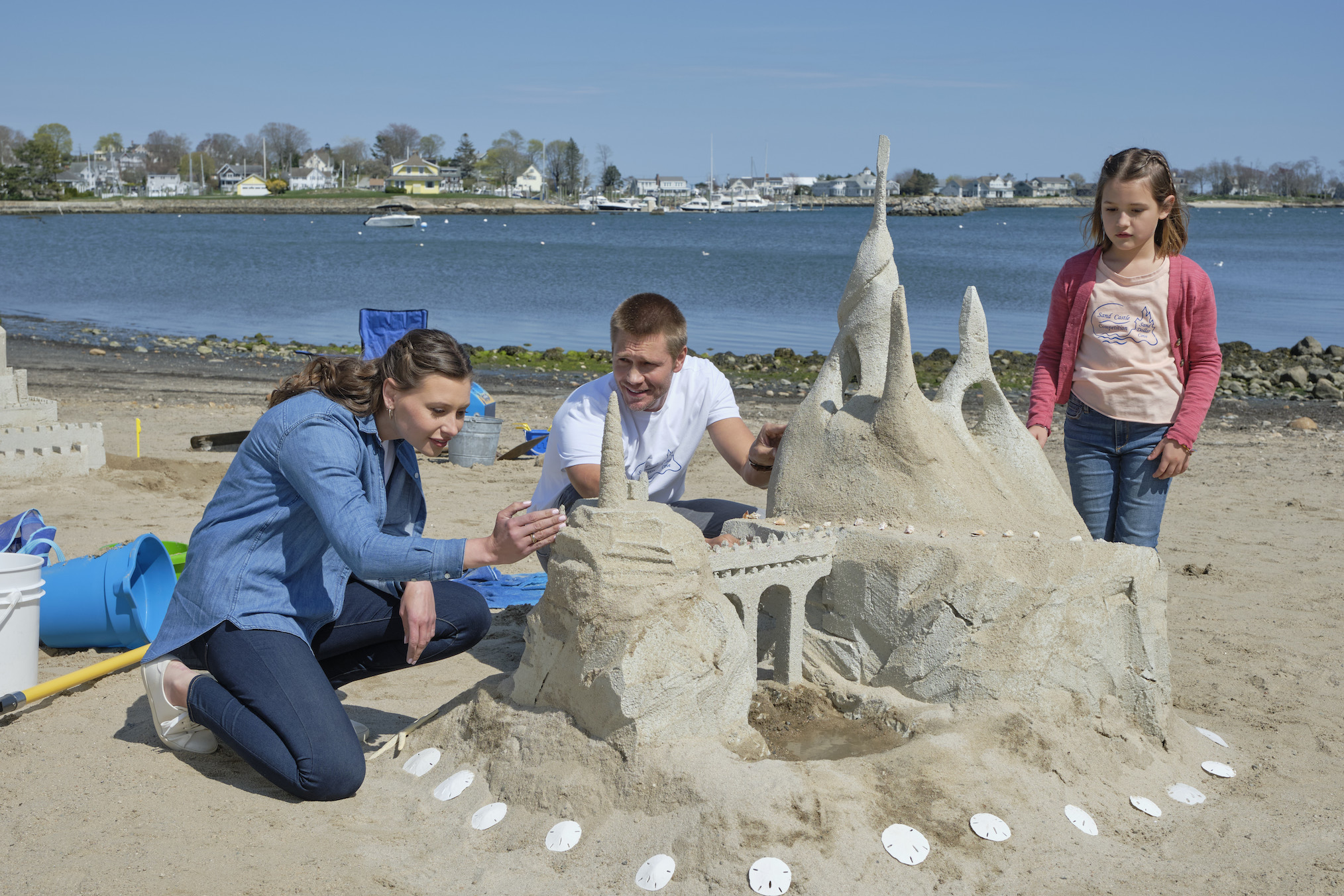 Chad Michael Murray: Brody’s a large part of the heart and soul of what Sand Dollar Cove is, and he cares so very much about their values and their history. His main goal is always just to get this pier back to its beauty and get all the tourists back to take it in, to enjoy, to know what this small town’s about. He’s so focused on something else that he’s excusing the void in his life, not just a void in love but the void in what he ultimately wants to be.

Michalka: When we first meet Elli, she’s trying to break out of her job criteria in a way and trying to do something that makes her more passionate about the reason why she got into development in the first place. We find her struggling to come to some kind of an agreement with Brody when it comes to developing this land that he obviously holds at an incredibly high value. She’s a city girl, she’s a workaholic. Then when she meets Brody, he reminds her of some of the greater things in life to enjoy and celebrate, like family and friends and nature and good food and good people. She’s definitely caught off guard by this small-town charm and she’s really taken with it. 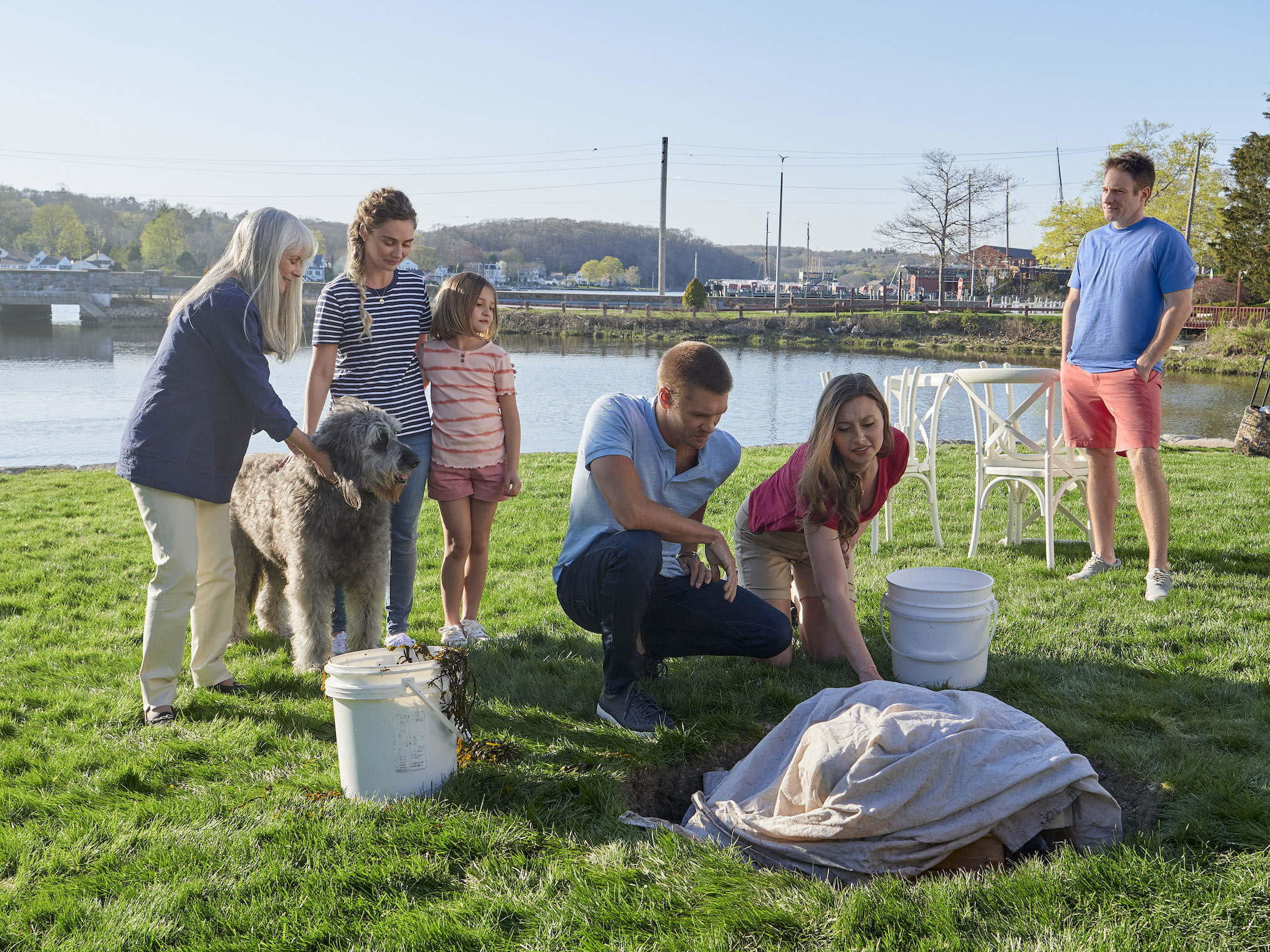 Michalka: The dog in the movie was amazing. He was our favorite cast member. He was the best-behaved on-set dog ever.

Murray: He was a rock star. I’ve never seen [an acting pet] that was so very smart.

What are Elli and Brody’s initial impressions of each other?

Michalka: Their first impression is OK. Their very first meeting is kind of accidental, with Elli trying to document some of the damage that has happened in the storm. Then she slowly starts to realize that Brody knows who she is and that she’s out there to develop this land and he’s not really willing to give up the pier. He’s kind of playing a little bit of a game with her. I think he thinks that it’s all in good fun. She is not necessarily down for it in the same way, but then over time, she’s kind of charmed by his easy-going nature and the fact that he really does care about this community. Who’s more awkward and who’s more obvious as Elli and Brody inch closer to getting together?

Michalka: Maybe Elli? There are a couple more awkward moments with Elli because she’s a little bit out of her element. This isn’t an area that she’s grown up in and she doesn’t know these people in the way that Brody does.

Murray: I agree. Elli’s very much the fish out of water coming into Brody’s world. And so that would make things far more awkward for her, especially when she’s coming in to go against the grain. The pier has so much meaning to the small town. I think that would make anyone feel uncomfortable.

What was the most fun scene to film?

Michalka: Honestly, a lot of the scenes with the dog. The dog and the little girl who played Millie — Lily Jane Chachula — we just adored the two of them. So anything that they were in Chad and I were thrilled about: the sandcastle stuff, all the stuff in the little diner, the clambake. Their energy was just great and it really brought out I think really good performances from everybody else because they were so, so down. Murray: LJ’s an incredibly, incredibly talented young girl. She was just on it. She brought such a light, wonderful energy to the set that we needed and that really helped us all get through the day and the grind of the schedule. Mystic, Connecticut in March is cold. It snowed three times while we were filming. But I think that also created a bond for the cast; we all grew closer knowing we were all enduring the weather and the elements together. I loved the fair stuff. It was just really beautiful, a really great backdrop. The sets were fantastic. All the vendors that came out in Mystic to help us were just rock stars.

I liked how much Elli became part of the community with the clambake she got to experience for the first time.

Michalka: Yeah, it was a really sweet scene. And I think it just shows that Elli is starting to fall for this family and is opening up her heart to them, and I think she’s also seeing that Brody is [respected] within the community too, which I think makes her only grow closer to him.

Sand Dollar Cove where to stream