When John Morrison rejoined WWE and reunited with tag team partner The Miz in 2020, it didn’t feel like eight years had passed. In fact, the duo didn’t miss a beat. These best friends won the tag titles, produced music videos, and made “Hey Hey” a thing. This obnoxious yet entertaining pair has also been thorns in the sides of the likes of Drew McIntyre and Bad Bunny.

However, a recent injury to his partner in crime saw Morrison go it alone as a singles competitor. It’s a run the former Intercontinental champion jump-started during the June 21 episode of Raw with a big win over Randy Orton to qualify for the Money in the Bank match at the event of the same name July 18. Fresh off the big victory, we sat down with “Johnny Drip Drip” to chat about the recent success.

How do you feel things have panned out since coming back to WWE?

John Morrison: In wrestling, things never really go the way you expect. I was really excited to come back and work with Miz. In the Chronicle documentary that talks about my return, Dolph Ziggler is walking toward me while cameras are following. All I did for my debut was open the door and say, “I’m sorry. Miz doesn’t feel like talking right now.” Ziggler gives me a high five after and says, “Sweet debut bro.” Did that go how I expected? No. Everybody thinks of ideas on the basis they see themselves as main event guys. I certainly do. But since have things go the way I liked? Definitely, yes. 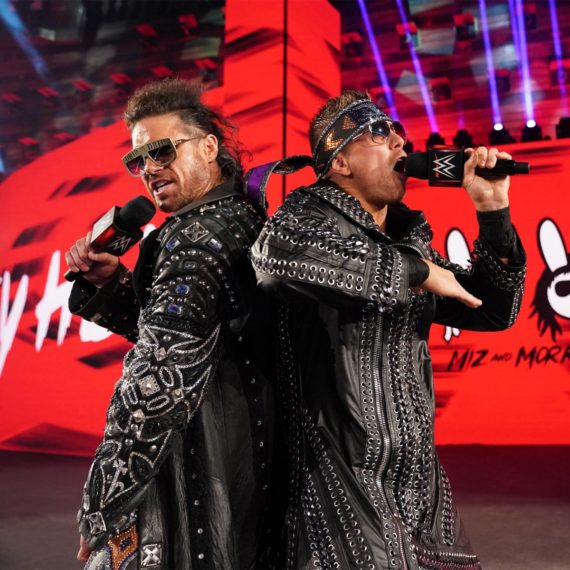 Seems like you’re having a lot of fun now working with The Miz.

I really love working with The Miz. He is a great tag partner and wrestler. But, most importantly, he is one of my best friends. One of the people who were there for me when I was gone for the past eight years. I can call him and talk. Now that I’m back, nothing has changed. The chemistry we have on camera is based on authenticity. A lot of times in entertainment that’s not how it is. With Miz and me, we’re best friends off cameras, so it’s easy to show on camera.

In WWE, there has been criticism about over-scripting promos. Yet it appears you have a lot of creative freedom. How does it feel to have that kind of trust?

Sometimes it’s improv, but I would call it more collaborative. We’re not going to talk or say anything without producers, agents, writers, Vince [McMahon]. As soon as we get anything, we read it and talk to each other. We may say, “These lines are crap. Let’s fix it the best way we can and then go talk to them about our fixes.” It’s not good to be thrown into an office and just say something is garbage. You may say, “You know what I like better is this other option.” We constantly do that. A writer or Vince may agree and say, “This is better. But you know what would be even better? This.” It then evolves…Also, something that is lost on so many people is it takes a lot of courage to be vulnerable and be affected by something. Just being cognizant about that, which I wasn’t during the first run. Doing improv and saying things. We are having fun, but we also work really hard on the promos. Everything you see on TV, it’s a process.

Your wife Franky Monet recently debuted on NXT. What is it like to finally have her in WWE?

I remember coming back from the gym and was super tired. The first thing she says, “Can you go to the ground for a second? I have a few [Mexican submission holds] I want to try on you.” Then I worked on one too. Just being able to do that and talk about the business and talk to someone who I love. Someone I want to spend my life with, it is very special because there aren’t people who really understand all this. She does. You have this offshoot “Johnny Drip Drip” character. Tell me about where that came from.

I was in a car with Franky, and I like to rap a little bit. When a song comes on, I change the words. “Who Franky calls when she wants it? Johnny. Whose maneuvers be gnarly? Johnny. Who got that tough paper brawny? Johnny. Who got that famous dog? Johnny. Who got that ‘Drip Drip’ speak? Johnny. Who rolls with his wife in a jeep? Johnny. ‘Drip Drip’ is lit.” Stuff like that. She’ll say, “You know that was good, but you know what would be greater though? If you shut up and let me listen to Cardi B.” I like music and singing along to things. When Miz and I had our first rap song, I called myself “Johnny Drip Drip.” It kind of took on a life of its own. Then I started using all these water metaphors. I really enjoy using the word moist. It happens to be Franky’s least favorite word. I’ll say, “I’m moist by choice babe.” She’ll say, “Don’t ever say that again.” It’s fun to bug her a little bit. The whole “Johnny Drip Drip” now is the way I dress, my hair, it’s all my version of what drip is. All that stuff is fun and ridiculous. And I happen to like ridiculousness.

You got a big win over Randy Orton. What’s your mindset as you are going into this new phase of this run?

There is excitement. This is why I came back. When I left, I feel like I was a pretty good pro wrestler. When I was gone, I realized I had a lot to learn. Since I’ve been able to push myself physically and feel like I’m still in my prime or a year away from my prime. In pro wrestling, you’re in-ring IQ, body movement, instincts, and all that determines your prime. For me, I feel like it’s right around the corner. It’s right now. Getting the chance to progress on WWE TV in front of the WWE Universe. This is why I do what I do.